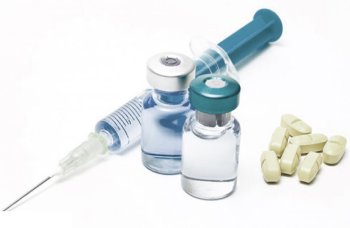 Three weeks after starting a second cycle, a healthy 24-year-old bodybuilder became ill. He developed a rare disorder of the nervous system – his immune system started to attack the nerve pathways in his muscles. Austrian neurologists described this terrifying case in Muscle & Nerve.

Case
The 24-year-old bodybuilder became ill during his second steroids cycle. Three weeks after he’d started to inject testosterone from an unknown source he started to lose strength in his hands and was finding walking difficult. After four months the bodybuilder went to a doctor.

The neurologists who examined the bodybuilder discovered that the man was suffering from the pure motor variant of chronic inflammatory demyelinating polyradiculoneuropathy, a rare disorder in which the immune system attacks the nerve pathways in the muscles.

Treatment
The neurologists first gave the bodybuilder intravenous immunoglobulin, antibodies from the blood of at least a thousand blood donors. This treatment works in most people with this muscle disease, but it didn’t work for the bodybuilder.

Steroids of unknown origin, a bodybuilder and a rare disorder of the nervous system
So after a few months the neurologists decided to try the corticosteroid methylprednisolone and the immune inhibitor azathioprine and this combination did work. After several months the neurologists stopped the methylprednisolone, and after a few years they also stopped the azathioprine. At that point the bodybuilder had no symptoms. And four years later he was still free of symptoms. The disease had gone into remission.

The Cause?
The Austrians were groping in the dark about the cause of the mysterious muscle disease.

“The close temporal relationship to anabolic steroid exposure and development of pure motor variant of chronic inflammatory demyelinating polyradiculoneuropathy suggests an immune-mediated demyelinating process triggered by the anabolic agent, but it may be purely coincidental”, wrote the neurologists. “Unfortunately, the exact composition and source of the anabolics remained unclear. Current knowledge about the potential neurotoxicity of anabolic steroids seems to indicate that they spare the peripheral nervous system.”

So the neurologists think it is unlikely that anabolic steroids themselves cause pure motor variant of chronic inflammatory demyelinating polyradiculoneuropathy.

The bodybuilder probably used steroids that had been produced illegally. Unfortunately some underground labs are sloppy in their work. Ask William Ullmann, the chemist who a few years ago did a detailed analysis of a couple of steroids produced underground. Or William Llewellyn, the author of the Anabolics series.

Below is Llewellyn’s presentation on the steroids market that he gave at the 2012 National Drug Conference in Cardiff, Wales.

Several reports suggest that the pure motor variant of chronic inflammatory demyelinating polyradiculoneuropathy (pm-CIDP) may not respond to or even worsen after corticosteroids,[1-3] and current guidelines have adopted their conclusions by recommending intravenous immunoglobulin (IVIg) treatment.[4] We report a patient with pm-CIDP after anabolic steroid use who remained unresponsive to IVIg but had full recovery after corticosteroid therapy.

A 24-year-old, previously healthy, amateur bodybuilder presented with a 4-month history of weak hands and feet and gait difficulties. Symptoms had been progressive over 3 months and had evolved 3 weeks after he received intramuscular testosterone from an unknown source as a second-time user of anabolic agents. Neurological examination revealed symmetric distal more than proximal weakness in all limbs (strength on the Medical Research Council scale 4-/5 to 4/5) and generalized hyporeflexia. He had no ataxia or involvement of cranial or sensory nerves. Plantar responses were flexor. Nerve conduction studies (NCS) fulfilled electrodiagnostic criteria for definite CIDP[4] with multiple partial motor conduction blocks, slowing of motor conduction velocities, and F-wave abnormalities, whereas sensory nerves were normal throughout (Table 1). Cerebrospinal fluid examination showed elevated protein (106 mg/dl) and normal cell count. Serum anti-ganglioside antibodies were negative.

Further work-up for associated conditions according to guidelines[4, 5] was unremarkable. He received 2 high-dose (2 g/kg) courses of IVIg within 2 months, but subjective symptoms, motor exams, and NCS remained unchanged. However, response to oral methylprednisolone (starting at 80 mg/day for 8 weeks) was excellent; he had complete normalization of motor function within 2 months and improvement of NCS over time (Table 1). Steroids were then gradually tapered (8–12 mg every 4 weeks) and eventually stopped after 10 months. Azathioprine (1.5 mg/kg) was given for another 2 years. During follow-up over 4.5 years he never relapsed.

This case raises several considerations. The patient could have been the occasional non-responder to IVIg, as only 60%–80% of patients with CIDP improve in response to any of the first-line treatments.[5] Although unlikely, we cannot exclude the possibility of remission unrelated to steroid treatment. Busby and Donaghy found only 1 of 5 patients with pm-CIDP to improve after steroids.[1] However, pm-CIDP is a rare disease. Selective response to IVIg may have been overstated through low numbers of cases and publication bias. It is important to differentiate between pm-CIDP and multifocal motor neuropathy (MMN), a distinct disorder well known to worsen or be unresponsive to corticosteroids. MMN usually manifests with slow or stepwise progression, and focal, asymmetric upper limb weakness.[6] Our patient presented with subacute, symmetric, proximal and distal weakness in all limbs, which progressed over 3 months. With hindsight, our use of azathioprine to spare steroids seems debatable due to its questionable efficacy in CIDP[5] and the patient’s monophasic disease course. The close temporal relationship to anabolic steroid exposure and development of pm-CIDP suggests an immune-mediated demyelinating process triggered by the anabolic agent, but it may be purely coincidental. We are not aware of any similar report. Unfortunately, the exact composition and source of the anabolics remained unclear. Current knowledge about the potential neurotoxicity of anabolic steroids seems to indicate that they spare the peripheral nervous system.