Two things need to be said from the get go. Bodybuilding is what started it all, it’s what put the fitness industry on the map and it’s the men AND women who aspire to create a muscular, symmetrical, and JAW-DROPPING physique that have worked this sport from a tiny garage gym in Venice Beach, CA, to a multi-billion dollar international market. Although other divisions may boast greater competitor numbers, raising more in contest fees to keep (local, regional) shows growing, bodybuilding will always be the headliner. For as ripped as a Men’s Physique competitor’s abs could be – or – as sexy as the best bikini competitor’s glutes may appear, both pale in comparison to bodybuilding. 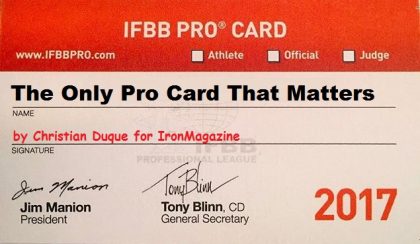 There’s an undeniable adrenaline rush that takes hold in the audience when the Top 5 bodybuilders, exhausted and scorching under the lights, all, simultaneously bring the house down in their (typically) final mandatory pose – the most muscular! When the best of the best are at their absolute weakest, just about to drop dead, when they’re running on all but fumes, this raw surge of power comes over them as they hit that last, epic pose, flexing, expelling air, veins popping everywhere – the audience just fuckin loses it – each and every time! The second thing that needs to be pointed out is that every bodybuilder – everywhere – dreams of the day he/she will earn pro status. In many countries, particularly the smaller ones, there’s a distinct difference between pros and amateurs. The former are highly advanced, highly-disciplined, and work with the very best contest prep, posing, and nutritional gurus. The latter, range from beginners to intermediate-level athletes.

Here, in the United States, the only amateur federation that leads to the coveted IFBB Pro Card is the National Physique Committee (hereinafter “NPC”). Unlike many other “amateur” federations, the NPC could easily pass for a pro federation around the world. What do I mean by that? Well, the level of talent in NPC Bodybuilding, quite frankly, buries many of the international IFBB country’s best competitors. For example, a top 10 national-level NPC bodybuilder could wipe the floor with IFBB Pro’s from many parts of the world. That’s fact. Also, a top 10 nationally-ranked NPC bodybuilder could walk into ANY other “amateur” federation here in the United States and get a pro card in a heartbeat. They could more than likely also clean house in any IFBB rival’s “pro” division as well. So why don’t they?

There are “federations” in the United States, getting big advertising and sponsorship dollars, that could essentially be summed up as little more than smoke and mirrors. There are “pros” getting pro cards at amateur events where an entire division has two competitors. I said division, not class! There’s also a seemingly endless sea of “natural” federations, so new, some don’t even have a website. Nonetheless, they’re sanctioning shows, collecting contest fees, and handing out pro cards like candy. These natural federations scan the country for successful NPC contests, then put their shit shows in close proximity to NPC events, hoping to ride the coattails of promoters who’ve worked their lives creating successful events. There’s big money for those with little to no integrity.

That having been said, real bodybuilders see the writing on the wall. The men and women who’ve spent 10, 20, or more years perfecting their physique, building important relationships, and gaining invaluable cred in fitness circles, they know what an IFBB Pro Card means – and – how none of the others are worth the cardboard they’re printed on.

Those who embark on the long haul, must have the heart for the journey. The road to the IFBB Pro Card is a different one for each competitor. Some are blessed with exactly what the judges are looking for at a given time and have incredibly short amaetur careers. Take IFBB Pro Bodybuilder Bryan Balzano. His amateur career consisted of two shows. Bryan worked his butt off, winning the novice, middleweight, & overall at the 2014 NPC Michael Francois Classic. Just 10 weeks later, he competed at the 2014 NPC USA Championships, winning a very tough Middleweight Division, & earned his IFBB Pro Card. This is how most guys wish they could turn pro, but it’s quite rare.

Imagine being a natural bodybuilder in the NPC. Not only do these great athletes compete with the best, but they have to find contests that are tested and will afford them the opportunity to qualify for national level shows. There are many great natural events to choose from, but one of the best in the country, are Dave Liberman & Todd Pember contests. Both the NPC Natural Ohio and the NPC Natural Northern USA are diamonds in the rough. These massive shows (including equally gigantic expos) are the launching pad from which many of the best IFBB Natural Pros have emerged. Whereas the Mr. Olympia has been called the “Super Bowl of Bodybuilding,” the NPC Team Universe is said to the be “Super Bowl of Natural Bodybuilding.” Although the event isn’t marketed as a natural contest, it is tested, and has been the premier show for NPC natties since as far back as I can remember. It’s such a great event, that some class and even overall winners have not applied for their IFBB Pro Cards, opting to continue competing at Team U instead. Many of the greats who have taken pro status have gone on to establishing themselves as fitness writers & businessmen, like IFBB Pro Jeff Willet. Others are competing and placing exceptionally well in the pro ranks, staying natural, and true to their convictions (e.g. R.D. Caldwell Jr., Mark Sindayen).

In addition to those who turn Pro quickly & those who turn Pro as natties, you have those whose journey puts them, their significant others, their friends, family, and co-workers through HELL and back!! I’m talking about the competitors who are regulars among the highly elite, Top 10 nationally-ranked NPC bodybuilders. The competitors who routinely place Top 6, Top 5, and even Top 3 at huge shows like the North Americans, Team U, Nationals, Masters Nationals & USA’s. The competitors who have taken runner-up more times than they’d care to share. What does a judge say to someone who places Top 3 in a class of 35 guys? What could a runner-up do that would ensure victory? In reality, anyone in a competitive Top 5 (especially Top 3) could potentially win the class/contest. When dealing with a subjective sport like ours, it could be argued that a physique that earns 2nd or 3rd shouldn’t be drastically altered, but what then do judges tell the poor competitor? How long will it be before THAT physique is what the judges want? Will the time ever come?

Imagine taking the time off work, dieting down, flying all over the country, holding your heart in your hand, each and every time, during the stillest moment on earth, hoping the judges want you – only for it to be the other guy, time in time again. Most guys can’t eat that defeat more than once or twice in their lives., Hell, we have guys that could potentially win the Mr. Olympia, who I suspect won’t even step foot on stage because they can’t handle the rejection anymore. Rejection has caused more than a few to give up altogether.

A few other bodybuilders see these new federations popping up and have answered the call. Now they’re “pros,” but deep down, the humiliation they feel must be equal to and/or greater than the sense of rejection they felt when passed up for an IFBB Pro Card. Now, each time they tell someone they know that they’ve gone pro, they’ll have to stop them midway through congratulatory hugs & praise, to clarify they’re not IFBB Pro’s, but pros in some federation no one’s ever heard of. Some might have a hard time keeping a straight face, some may want to break down & cry, others might just want to find a really dark corner, crawl into it, and die. I’m not kidding. Earning a pro card anywhere but in the IFBB, only makes you a Pro Joke. 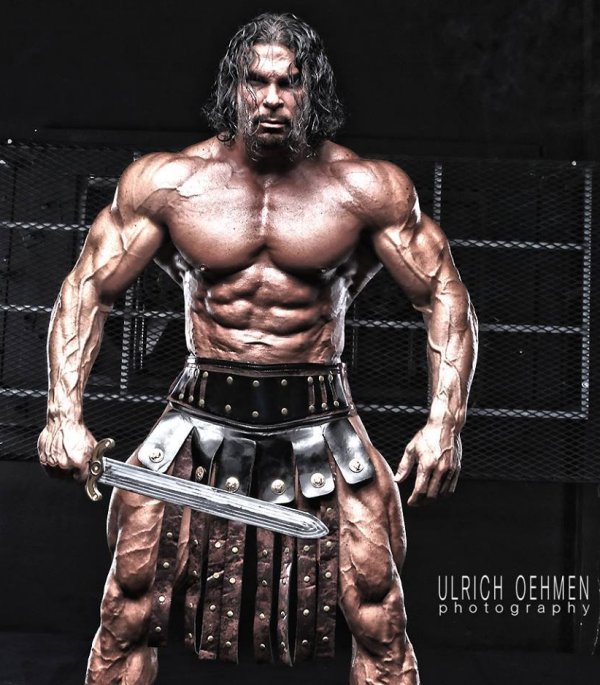 But the journey isn’t for everyone. This is why I have a mountain of respect for guys like Joe Thomas. Joe has been in the game for a solid decade. I’ve interviewed him for RxMuscle, StrengthAddicts.com, and now I’m writing about him in an article for Iron Magazine. There were years where I’d scrutinize every inch of his physique, literally scratching my head at how he didn’t win. IT’S A SUBJECTIVE SPORT.

Over the years, Joe accepted his placings and exemplified good sportsmanship. He carried himself like a true ambassador for the NPC should & the thought of jumping ship never crossed his mind. Each time we spoke, he described plans for improving his physique and impressing the judges & the fans. Mind you, this was a competitor who always had great sponsors, because these companies saw the undeniable potential in his physique and business acumen. Joe always had an army of fans, always drawing fans to whatever booth he was behind at large expos, like the Arnold Sports Festival. That [all] having been said, Joe was always down-to-earth, humble, and hardworking. He was a man on a mission. He wouldn’t go away, wouldn’t quit, & would keep coming back hungrier and more poised to get that IFBB Pro Card. That kind of heart is rare, but you see it – as a fan – over the years, with guys like Joe, Bob Cicherillo, Jerome Ferguson, Mike Ely, Vinny Galanti.

If I had only but one point with which to win my argument, one litmus test to show the value of the IFBB Pro Card, I’d rest my entire case on the hard work, blood, sweat, & tears of the men and women that have stood the test of time, to claiming their place among the very best bodybuilders in the world.

Much like the NPC is the only way to the IFBB, the IFBB is the only federation whose athletes compete on the Mr. Olympia stage. Never has there been a contest that brings the world’s best bodybuilders to one stage. Never before has there been a higher and more coveted, crowning, and defining achievement than winning a Sandow. Only IFBB Pro Bodybuilders can ever be crowned Mr. Olympia – the #1 greatest bodybuilder on the planet.

The idea that a new federation – or any federation for that matter – can recreate an amateur circuit like the NPC, the undisputed excellence of the IFBB, or an event rich in bodybuilding history, from Larry Scott to Phil Heath, out of thin air – is both patently absurd and ludicrous.

The only pro card that matters – is the IFBB Pro Card.