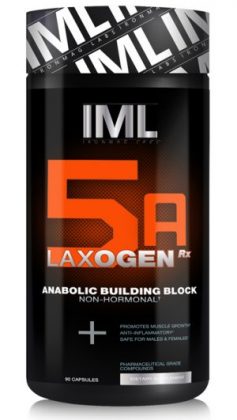 Bodybuilders who regular browse in online supplement stores will know the products containing laxogenin and its close relative 5-hydroxy-laxogenin. They are usually found in capsules, but there are a couple of products that come as a gel that you rub into your skin. According to a patent application, laxogenin and 5-hydroxy-laxogenin are also interesting anti-aging substances as well as being interesting for steroids users. Let’s just hope that the people who filed the patent application weren’t just making it all up.

Laxogenin is a spirostane. Like ecdysteroids, spirostanes are found in plants. The laxogenin and 5-alpha-hydroxy-laxogenin that are so popular at the moment in supplement-land come from the Chinese plant Smilax sieboldii. The first structural formula shown below is that of laxogenin, the second is that of 5-alpha-hydroxy-laxogenin. As a comparison, see the structural formula of ecdysten here, the ecdysteroid most commonly used in supplements.

The authors of the patent application US 20140274978 make it sound as though they have research data that has never been published – and perhaps never will be published. Whether this really is the case, we don’t know. It may be that the patent authors have made everything up. Nevertheless we discovered seven things in the application that we’d like to share with you.

1. Interesting for strength athletes
“Spirostane and/or spirostene compounds of the present invention are useful as non-hormonal anabolic agents which increase athletic performance and work output in humans and other mammals in doses of 1-60 mg three times per day.”

“In young human volunteers receiving 10-20 mg/day of the phytosterol derivative compounds of the present invention in combination with physical training, subjects reported an increase in appetite, accelerated strength and weight gain, and a virtual elimination of lactic acid formation during intense exercise such as weight resistance training. Work output before failure was also reported to be increased substantially.”

2. Anti-aging effect
“The spirostanic compounds of the invention are also useful in increasing and restoring health and vigor, useful in preventing fatigue, and useful in improving physical condition and performance and increasing work output in aging humans and other mammals. For example, 15 mg of 5-hydroxy-laxogenin was given to a 65-year-old woman in three divided doses per day (t.i.d.) for two weeks. She reported an overall increase in well-being, accompanied by a definite increase in energy and physical stamina which permitted her to work 2-3 times as long in her garden.”

3. Improves sleep
“One 80 year old male and one 79 year old female volunteer, both receiving 60 mg/day of the same compound, reported definite increases in physical energy and stamina within one week of beginning administration. The couple also found that their total sleep time increased from 6 hrs/night to approximately 8 hrs/night over the course of one month and that this increased sleep was more restful.”

4. No hormonal side effects
“Competitive binding inhibition studies conducted at Baylor University in Texas showed that 5-alpha-hydroxy-laxogenin did not bind to androgen or estrogen receptors.”

“Competitive bodybuilders who were currently using various anabolic steroids volunteered to also use 5-alpha-hydroxy-laxogenin or 7-keto-diosgenin in divided doses totaling 20 mg/day. These volunteers reported greatly accelerated increases in muscle mass (between 10-20 lbs over two months); these increases were far beyond what they had previously experienced using only conventional anabolic steroids.”

7. Dosages
“In general, for laxogenin, 5-hydroxy-laxogenin and 7-keto-diosgenin, one can take the age of the subject, divide by two, and resulting number is an effective oral daily dose in milligrams for a person of average body weight (70 kg/154 lbs). The dose can be proportionately increased for persons of greater than average body weight. Effective doses should preferably be taken in 2-3 equal doses per day.”