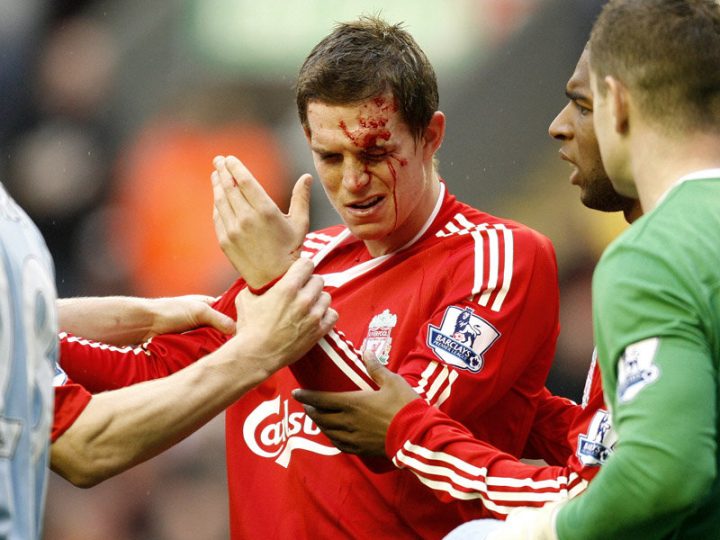 As the title reads, there is a sport out there where athletes intentionally cause head/brain damage as part of the sport. Well, kind of. Many would think the sport we are referring to is football—but you would be incorrect. The sport, is actually soccer—known as the most popular sport in the world.

Now before everyone starts making fun of soccer players for flailing all over the pitch (field) from the slightest contact, let’s focus on just the topic at hand—head injuries. A part of the game that happens more times than I can count, are what is known as “heading.” This is where an athlete purposely while standing or jumping uses his or her head to redirect the path of the soccer ball. For those of you who played soccer are probably having an “ah ha” moment. For those of you who have never played soccer, think of someone kicking a ball at you and you can’t use your arms to stop it, so you instead use your head to move and redirect the ball. Many times, that ball can be coming at quite a bit of speed. Therein lies the problem.

There are other ways, however, that soccer players can incur head injuries, such as by colliding with another player or by their head hitting the grass/turf. Researchers are now seeing signs that soccer players are showing an increase in concussion-like symptoms which they believe is from heading. While the research being spoken of can’t definitively say if heading can cause any brain damage or long-term effects, they can say for certain that heading can induce a concussion or just concussion-like symptoms in the short-term. For that reason, researchers went out in search of answers to the question how often is this happening and how bad the symptoms truly are from heading a soccer ball.

The “goal” of the research…

The goal of the research is clearly to protect the brain of soccer players and to see if there is potentially any risk being placed on them by repeatedly heading the soccer ball. Therefore, researchers from NY put together an online survey for amateur adult soccer players (both male and females between the age of 18 and 55) who were living around New York City. They did note that 80% of the participants in the study were men. Between 2013 and 2014 they were able to obtain 470 completed surveys. The survey asked the participants exactly how many times they played soccer within a previous two-week period. They also asked them how many times they headed a soccer ball and how many times they took a blow to the head from either the ground or another player accidently during the course of a game. They finished off the survey by asking each individual if in the past two weeks they experienced any signs of dizziness, pain, or if at any point they lost consciousness.

When the surveys were looked into further, they found that 37% of men who completed the survey mentioned they did indeed take some shots to their head by accident. That number increased according to women who completed the survey by saying 43% of them too unnecessarily took shots to the head from opponents or the ground. The next finding seemed very high, but men who completed the survey mentioned they headed the soccer ball on average around 44 times within the 14-day timeframe while women averaged around 27 times. Something that came as a shock, but really shouldn’t was the concussion-like symptoms noted by those who participated. According to the results of the study, 20% of the individuals said they had moderate to severe concussion-like symptoms after playing soccer within the two-week timeframe. That’s 94 surveys out of the 470 that were completed.

It makes you wonder what damage could have been done to all of us who played soccer, even as kids in school. I know for a face that I headed A LOT of soccer balls when I played. Maybe that explains a few things about me? But seriously, I wonder what effects that might have had on my cognition. While I don’t remember having concussion-like symptoms, back then no one was really looking into those things as much as they are these days. I do remember I was getting headaches as a kid, maybe that was just a piece of the equation of what we are looking at here? Pretty scary when you think about it. Think about your own childhood or even if you play soccer recreationally or professionally right now. Do you find you may have concussion-like symptoms? If so, it would be wise to go get checked by your doctor.

How long does the season go? And the symptoms?

It’s safe to say that some of these soccer players could have some long-term cognitive issues based on the amount of accidental shots to the head they take or the overall number of balls they head. More research must be done in order to look at the long-term consequences that some of these athletes might face. While it’s difficult to not head the ball in a game if given the opportunity to do so in order to maintain possession or take a shot on goal, it’s even more unlikely that anyone would be able to stop or minimize the number of accidental hits to the head from the ground or the opponent—it’s simply part of the game. If concussion-like symptoms occur for 20% of the surveys the researchers got back, what does that mean for the thousands, if not millions, of soccer players across the globe? How many of them are suffering side effects? And of those who play year-round, what could that mean for their long-term cognition?

When we look at studies from the NFL, they are constantly trying to figure out how to minimize the rate of concussions and hits to the head in the game. Some money for research should also get put behind sports like soccer where the same consequences can take place with repeated hits to the head, rattling the brain around.

Source:
Materials from this article were found on foxnews.com.