I first read about modafinil in Muscle Media 2000, where it was claimed by Charles Poliquin to be in heavy use by sprinters to improve reaction time off the starting gun, and by Dan Duchaine to be a favorite of life extension enthusiasts (“geezers,” I believe he called them) seeking to stave off cognitive decline.

Duchaine, being the swell chap that he was, graciously provided the addresses for overseas life extension companies who were more than willing to ship modafinil to America. I’m sure you can see where this story is going…

But unfortunately, I can’t give much of a personal review of this compound, because I used it simultaneously with Hydergene and Piracetam. So despite its recent emergence as the drug célèbre for the ostensible biohacker crowd, it’s been widely circulated in the better-performance-through-chemistry circle for a very long time. Unfortunately, it’s now a Schedule IV drug, which puts it in the same legal category as certain prescription narcotics like tramadol and phenobarbital.

Forgetting its off-putting narcotic-ey legal status, modafinil is still available with a prescription for conditions that require a wakefulness agent (eugeroic) – we’re talking about narcolepsy, shift work sleep disorder, etc…If you’re tired all day, this is one of the potential drugs that can be prescribed. This, of course, assumes that you can fall asleep and stay asleep, as those conditions generally warrant a sleep aid instead of a wakefulness aid.

Various branches of The United States Military regularly prescribe (or have prescribed) amphetamine to soldiers (the Air Force’s infamous “go pills” come to mind), as do many others around the world. Many have looked into modafinil as an alternative to the more traditional amphetamines—and that includes not only the U.S., but also the U.K., Canada, France, and India. Starting in 2012, the United States Air Force began replacing their amphetamine-based pills with modafinil.

I’m not aware of any statistics that confirm how many people are using it for narcolepsy, but in the so-called biohacker community it’s become very popular over the past few years. In terms of the athletic community, it’s banned by most sporting organizations and easy enough to test for (although it may not appear on most organizations standard battery). In the former community, it’s thought to be a cognitive enhancer, and I think if we take a look at its mechanism of action and the currently available research, I believe that’s a well-supported position.

Setting aside issues of legality, what follows is not meant to be an all-inclusive tract on modafinil, but rather a crash course for the uninitiated.

Like many other medications, modafinil is thought to operate by at least one primary mechanism and potentially numerous secondary mechanisms. It’s generally accepted that modafinil exerts the majority of its effects through inhibiting dopamine reuptake. Based on what I’m seeing in the clinical data, this seems to be the most sensible locus of activity.

Dopamine is a neurotransmitter, and when reuptake is inhibited, and more is circulating, neurotransmitter activity is enhanced (and here, usually cognition). This is highly intuitive, even if you’re not using modafinil – increase the circulating levels of neurotransmitters (the chemical messengers used by the brain), and you’re likely to increase cognitive (thinking) ability. 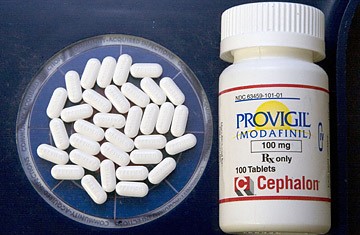 As you may have guessed, dopamine reuptake transmitters are used clinically for the treatment of cognitive disorders, such as attention-deficit hyperactivity disorder (ADHD), but also for conditions like narcolepsy (the latter we see with modafinil’s strict prescription regulations, but off-label many enthusiasts find that it helps the former). The broad category of dopamine reuptake transmitters might also have use as an adjunct treatment for obesity and binge eating disorder (the primary treatment being to just put the fork down), for their appetite suppressant effects. With regards to modafinil, many users report a stimulatory effect that seems to curb their appetite, regardless of whether that’s the intended use.

Although the jury is still out on the definitive cause for depression, dopamine is certainly part of the picture, and as a result dopamine reuptake transmitters are sometimes prescribed as anti-depressants and other mood disorders.

The most commonly used description of modafinil is that it’s a “selective, relatively weak, atypical dopamine reuptake inhibitor.” But it’s important to note that dopamine doesn’t operate in a vacuum within the human (or animal) body, and neither does modafinil – it clearly exerts effects on histamine, norepinephrine, and serotonin.

Pharmacologically, modafinil has a really unique profile, and I’d be hard pressed to identify another drug that has the same pharmacokinetic and pharmacological effects throughout the same spectrum and via the same mechanism of action (well, assuming we aren’t talking about drugs on the same branch of that family tree, such as armodafinil (sadly also a Schedule IV drug) and adrafinil (which appears to be widely available and not specifically scheduled at the moment).

Despite its effects on dopamine and serotonin (brain chemicals that make us feel good), modafinil doesn’t seem to have much addiction potential – and although it’s been more difficult to obtain in recent years, compared to when I first used it, I suspect we’ll be talking about it for a long time to come.