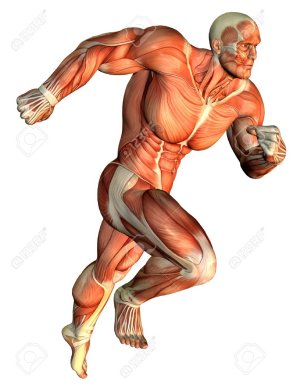 Strength athletes perform no better or worse if they do time-restricted feeding we wrote yesterday, based on an American study in which the participants did weight training for the first time in their life. In 2016 Italian sports scientists published in the Journal of Translational Medicine their findings from a comparable study. But the Italians used bodybuilders who had at least five years’ experience of weight training. And these bodybuilders reacted a bit differently to the combination of intermittent fasting and strength training than untrained people…

Study
The researchers recruited 34 male bodybuilders in local gyms, all of whom had been doing weight training for at least 5 years. They divided the 34 bodybuilders over two groups. One group ate meals throughout the day [Normal diet; ND]; the other group ate during an 8-hour period of the day [Time-restricted feeding; TRF]. The intermittent-fasting group ate between 1 o’clock in the afternoon and 8 o’clock in the evening.

The researchers got all the participants to do identical training for a period of eight weeks.

Results
Both groups had approximately the same total intake of kcals, carbohydrates, fats and proteins.

The difference in effect of intermittent fasting on fat mass was statistically significant: The intermittent-fasting group lost body fat.

Conclusion
“Our results suggest that the modified intermittent fasting employed in this study: time-restricted feed in with 16 hours of fasting and 8 hours of feeding, could be beneficial in resistance trained individuals to improve health-related biomarkers, decrease fat mass, and at least maintain muscle mass,” the researchers concluded.

“This kind of regimen could be adopted by athletes during maintenance phases of training in which the goal is to maintain muscle mass while reducing fat mass.”
“Additional studies are needed to confirm our results and to investigate the long-term effects of intermittent fasting and periods after intermittent fasting cessation.”

Background
Intermittent fasting (IF) is an increasingly popular dietary approach used for weight loss and overall health. While there is an increasing body of evidence demonstrating beneficial effects of IF on blood lipids and other health outcomes in the overweight and obese, limited data are available about the effect of IF in athletes. Thus, the present study sought to investigate the effects of a modified IF protocol (i.e. time-restricted feeding) during resistance training in healthy resistance-trained males.

Results
After 8 weeks, the 2 Way ANOVA (Time * Diet interaction) showed a decrease in fat mass in TRF compared to ND (p = 0.0448), while fat-free mass, muscle area of the arm and thigh, and maximal strength were maintained in both groups. Testosterone and insulin-like growth factor 1 decreased significantly in TRF, with no changes in ND (p = 0.0476; p = 0.0397). Adiponectin increased (p = 0.0000) in TRF while total leptin decreased (p = 0.0001), although not when adjusted for fat mass. Triiodothyronine decreased in TRF, but no significant changes were detected in thyroid-stimulating hormone, total cholesterol, high-density lipoprotein, low-density lipoprotein, or triglycerides. Resting energy expenditure was unchanged, but a significant decrease in respiratory ratio was observed in the TRF group.

Conclusions
Our results suggest that an intermittent fasting program in which all calories are consumed in an 8-h window each day, in conjunction with resistance training, could improve some health-related biomarkers, decrease fat mass, and maintain muscle mass in resistance-trained males.