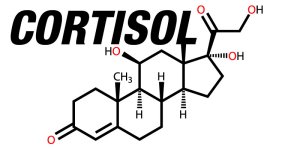 We don’t need to tell our regular readers that cortisol, the hormone that’s released when we’re under stress, can have a disastrous effect on your body. The epidemiological study that British researchers published in Obesity confirms this yet again. The Brits were able to show that a chronically raised cortisol level dramatically increases the chance of overweight.

Study
The researchers measured the BMI, waist circumference and cortisol concentration in the hair of 2,527 people over 50. They analysed 2-cm lengths of head hair. Because the hair on our heads grows 1 centimetre per month, these measurements provided a picture of the cortisol concentration in the bodies of the participants over the previous two months.

The relationships between cortisol, overweight and a thick waist were statistically significant.

Mechanism
“Chronic stress – and thus chronically elevated levels of cortisol – may promote obesity through effects on fat accumulation,” the Brits wrote. “The effects of cortisol are mediated via glucocorticoid receptors, which have a particularly high density in visceral adipose tissue.”

“In addition to absolute changes in energy intake, functional MRI studies have indicated that the sensitivity of central food reward circuits is lower during times of stress, which may increase cravings for ‘comfort foods’. [Int J Obes (Lond). 2010 Jan;34(1):172-81.] Under stress, there is a shift in preference toward more palatable, energy-dense foods irrespective of whether total energy intake increases. [Physiol Behav. 2006 Apr 15;87(4):789-93.] [Psychosom Med. 2000 Nov-Dec;62(6):853-65.]”

Conclusion
“These results provide consistent evidence that long-term exposure to elevated levels of cortisol over several months is associated with higher levels of adiposity,” the researchers concluded.

“Hair cortisol offers a suitable and easily obtainable measure for assessing chronically elevated cortisol concentrations in obesity research and may therefore aid in further advancing understanding in this area.”

“While cross-sectional studies have provided a good starting point from which to explore the role of hypothalamic-pituitary-adrenal axis dysregulation and chronic cortisol exposure in the development of obesity, longitudinal research is needed in order to clarify the direction of associations.”

Hair cortisol and adiposity in a population-based sample of 2,527 men and women aged 54 to 87 years

Objective
Chronic cortisol exposure is hypothesized to contribute to obesity. This study examined associations between hair cortisol concentrations, a novel indicator of long-term cortisol exposure, and adiposity in a large population-based sample.