The Dawn of the Dirty Syntholosaurus Rex 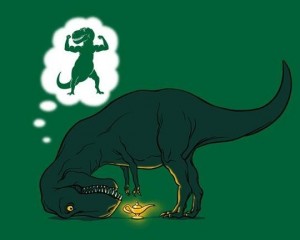 During the early 90´s one of the first famous examples of the Syntholosaures roomed the earth. One night during this decade I was watching the channel “Eurosport” when I saw the first and more famous specimens. This example was a German strongman and retrospectively he is one of the first alleged to use the subject of this article, namely Synthol. I remember the occasion very well, the German was wearing a purple bandana, fanny pack and the baggy pants covered in a star spangled banner pattern. The t-shirt he wore was meant for a baby syntholosaurus – but he didn’t care. He had cut-off the sleeves of the shirt to show his giant 27 inch biceps – while he ran around screaming as he struggled to lift the atlas stones during the strongman competition.

Since then, fashion like baggy pants, smart bags and bandana has died out unfortunate not the syntholosaurus though, no it still rooms the world and screaming worse than ever.

What is Synthol Used For?

For the new comers – the compound is basically used for cosmetic reasons to bring up more fullness and size to the muscle bellies or “fascia”. Thereby, injecting synthol does nothing to increase muscular performance for instance – some even say it’s the other way around – synthol makes the muscle weaker in the long run. When it comes to reasons behind why people choose to use it there are certainly many different ones.

One example is by trying to improve their symmetry by injecting the oil into the weaker muscle groups. The most common muscles are calves, biceps and deltoids but others too if needed. One of many problems as I see it with synthol is for example that it seems at times to bring muscles a bizarre and a funky. The true definition isn’t really there and the shape looks alien at times. The trained eye in the bodybuilding community can close to always distinguish synthol-use.

Then there are other issues involved which is worth mentioning. I’m thinking about the strange addiction part of synthol use. As a parallel many of us in the bodybuilding community has seen the orange tanned colored melanotanosaruses from time to time. The males are often quite tall, fat or as they call it bulky and have a shaved head or are completely bold. Also tribal tattoos are common among both sexes and the women prefer to dye their hair blond and tattoos like the so called “tramp stamp” in the lower back is showing alpha status in the female group.

Together both males and females go crazy at times when it comes to looking orange.

Some of the users of this substance called “melanotan” appears to lose touch with reality due to their tanned or orange addiction in the end. The same principle goes with synthol due to the increasing intake of the substance in some cases. It seems to get a kick of adding the fake inches to their so called guns and want to get the same affirmation over and over again – du to this their perception is lost and as a result in many cases it seems like their bodies have the same DNA as the elephant man in the end.

There are also those unique dino’s in the context who actually combine all these substances at the same time. Talk about a utterly unique specimen to put in the history books of – losers. 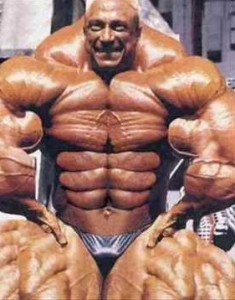 The Man Behind Synthol

Synthol was designed by the German bodybuilder Christopher T. Clark. According to Clark himself he got the idea to create Synthol when he was sitting on the toilet day. Sitting there waiting he came to think about that the syntholian forefather Italian “Escilene” or Formebolone. He knew that Esquiline was out of production and realized that he had a business plan in the making. Something that from a straight business side was very lucrative.

The oil compound is made up of 85%-medium-chain triglycerides, 7.5% lidocaine (pain killer, because you are going to be in pain) and 7.5% benzoyl alcohol.

When Clark introduced Synthol made the product gained popularity very quickly. Additionally this made the German a very rich man and his been years and have sold very well globally and still does but the difference today is that Clarks formula has been copied by different companies. Additionally the compound is sold on the market by many different names, Pain free lumps, pumps and lump, hump and pump, you name it, there are many different names out on the market.

Who Are The Users of Today?

Everyone from non trainers to IFBB Pros. Some uses it more wisely others don’t. Notable and very proud users of today is for example the young bodybuilder Bostin “3 CC’s” Lloyd who is widely known for his usage and speaks freely about it.

Contemporary nests for synthol are countries like Brazil and the Middle East like Iraq or Syria. In these countries, Synthol is almost more highly ranked than the war cause number one the black golden oil itself. Users in some of these war-torn places seems to inject it into their bodies because of some sort of Macho man syndrome going on or rather a retarded man syndrome in full effect. Youtube is full of examples for those who are curious.

The Risks of Use

An example is famous person that comes to mind when the substance is talked about usage is IFBB Pro Milos Sarcev. According to himself he was close to die because of this when oil actually started travel from his biceps to his heart. Anyone can imagine what would have happened if oil started to move around inside the heart.

Additionally who knows about what happens to the inner organs when the large ammounts of oil passes through them and especially the kidneys.

I do agree with those who say that AAS might not be the best things to inject in high amounts into the body either. But AAS increases strength and stimulate muscle growth and is actually for example used as medication for depression or importance for instance. While synthol is simply oil that creates 100 % fake and blown up muscles and were the side effects are at times nasty and in some cases very unclear for the medical world.

My hope is at least more people re thinks their possible use of this substance and watch its side effects throughout media a read more facts around it before you might become the next Syntholosarus Rex.