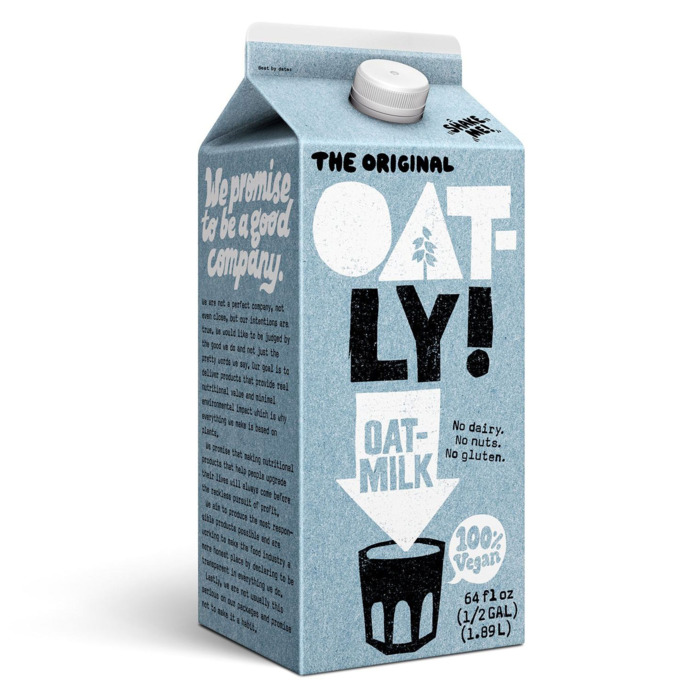 Back in the day if it had a tit, we were milking it. Goat milk, cow milk, women’s breast milk, you name it. Then came the shift to dairy-free options such as soy milk, cashew milk, almond milk, coconut milk, etc. Well, if you’re allergic or sensitive to any of those you now have a new option – oat milk. While I am all for new products coming to market, I can’t help but eyeroll over everything that is being turned into a milk these days.

Listen, when I was born, I was allergic to both milk and sugar. I would break out in hives like you wouldn’t believe. When I finally outgrew my allergies, I could never get used to the taste of milk or even sweets. To me they were awful. Long story short, to this day I still hate milk and anything that resembles the taste of milk. So, what am I getting at with my personal story? Well, if you’re allergic to milk and never drank it, or you’re allergic to nuts and never ate them, why would you even want to try a [fill in the blank] milk product? I’ve tried almond milk – hated it. I tried soy milk – hated it. I tried coconut milk – hated it. Everything just seemed to have somewhat of a taste and texture of real milk – which again, I hate.

If you’ve never had milk or never had nuts due to an allergy, you’re really not missing out on anything as you’ve already found alternatives to all of the above that you’re allergic to or were allergic to. Not once when I was allergic to milk did I say, “Damn, I really wish there was something that had the taste of milk that wouldn’t make me sick.” It never happened. And I can’t be alone in my thinking here. As they say, you don’t know what you don’t know and if you don’t know the taste of milk you can’t miss it. Yes, I understand the nutritional value with such products and alternatives, but there are real food options that you can consume and get the same nutritional value and micronutrient profile.

Is oat milk simply the next fad or trend?

There are a few brands out that have launched oat milk as a dairy and nut-free alternative. Are the sales doing well? Yeah, they actually are. But this could just be another fad similar to what happened when all of the nut milks started popping up claiming to be better than regular dairy milk.

The numbers are hard to argue though. The search term “oat milk” skyrocketed 186% on search engines in 2018. One of the top brands out there when it comes to dairy-free milk is Silk. It was reported by Nielsen that in 2018, Silk’s sales of soy milk were down year over year (-59.6%). What did they launch to keep up with the trend? You got it! Oat milk.

The claims for oat milk are that it is similar to dairy milk with its smooth and creamy texture but allows those who suffer from allergies to enjoy a refreshing and nutritious nut and dairy-free milk alternative. They mention it goes well in your favorite cup of coffee (similar to milk or creamer), in a bowl of cereal, or even a protein shake or smoothie.

FreshDirect, an online grocer, says that nut milk is out and that the new oat milk is taking over. They were quoted saying, “Oat milk is more sustainable and not as water intensive as other non-dairy milks, while also more abundant and inexpensive, which will help keep high-quality products at lower costs. Oat milk will continue to evolve in 2019 into new dairy-alternative products, such as oat-based yogurts and cheeses.” Personally, I’d be more willing to try an oat-based yogurt or cheese versus a milk, but that’s just me.

It’s hard keeping up with dairy-alternative milks these days. Everyone is coming out with their own version of a nut milk or now oat milk. Do I think dairy milk will eventually become obsolete? No, I honestly don’t. However, I do believe that there are many people out there, regardless if they have an actual allergy or if it’s all in their head, who will continue looking for dairy milk alternatives and when the next one comes along, they’ll follow suit and jump on that trend like they have all of the others.

Do I think these milk alternatives are junk? Nope. They have a place in the market for sure. However, each trend cannibalizes the previous. Look at the Silk example. Silk was down nearly 60% year over year with soy milk due to the advent of oat milk and other alternatives. Then when the next diary alternative hits the market you will see a dip in oat milk sales. It’s a constant ebb and flow of an up and down cycle when new innovation comes and goes.

Is that to say brands shouldn’t come out with an oat milk? By all means, go for it and make your money while you can. But don’t rest on your laurels thinking the trend will be here for any great length of time. By the time you blink something new will already be in the works.