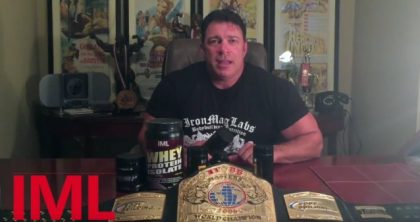 Studies looking into the screening of ProLensis™ reveal the presence of saponins, tannins, alkaloids and anthraquinones. These phytochemicals are ultimately responsible for the effects of ProLensis™. It has long been known that saponins enhance androgen (such as testosterone) production, and that alkaloids increase the dilation of blood vessels in the sexual organs.

ProLensis™ is a multi-faceted compound in all of the ways it exerts its positive effects on the hormonal balance of the body.

In regards to testosterone, ProLensis™ increases GnRH-LH signalling, and also increases cholesterol in the testes. These distinct processes are important for testosterone synthesis. GnRH, or Gonadotropin-Releasing Hormone, is released from the hypothalamus in the brain. In turn, this stimulates the release of LH, or Luteinizing Hormone, from the pituitary. LH is the hormone that directly stimulates cells (called Leydig Cells) in the testes to release testosterone. Evidence shows that ProLensis™ can stimulate LH 169% compared to study controls.

By enhancing GnRH-LH signalling, ProLensis™ amplifies the process by which testosterone is stimulated, akin to turning up the volume on a stereo.

In cooperation with this, ProLensis™ also elevates levels of testicular cholesterol. Cholesterol is the equivalent of raw material in the testes job of creating testosterone. The cholesterol is taken up into the mitochondria of the testes where it is processed into pregnenolone. From this stage it is converted into sex steroids and glucocorticoids. Due to cholesterol’s status as a raw material, it’s uptake into the testes is the rate-limiting step in sex steroid synthesis.

This manifests into a marked increase in testosterone of 347%, as shown in research. In other words, testosterone creation can only be enhanced if testicular cholesterol levels are elevated. In doing this, ProLensis™ increases testosterone output.

ProLensis™ has also been shown to act as an aphrodisiac. Studies involving mammals given ProLensis™ show a significant increase in frequencies of mount, intromission, ejaculation and ejaculatory latency. This effect is believed to be due to the increase in acid phosphatase (ACPT) in the testes. ACPT is widely distributed in the testes and plays an important role in the physiology of sperm. Increased levels of this enzyme are associated with higher testes output. Researchers believe this effect suggests an enhanced mobilization of carbohydrate and lipid metabolites which are used by the accessory sex structure and/or spermatozoa in the seminal fluid.

In addition to the effects on blood flow to sexual organs that the alkaloid phytochemicals exert, researchers have hypothesized that other constituents of ProLensis™ may act directly on the central nervous system, modulating the action of neurotransmitters. Unbeknown to some, neurotransmitters such as serotonin play a very large role in the complicated science of sex drive.

By influencing neurotransmitters, the bioactive agents present in ProLensis™ further augment the aphrodisiac effect of the extract.

Investigation into ProLensis™ has also demonstrated a marked decrease in estrogen levels in mammalian research models. This decrease is as much as 35% in comparison to study controls. While the researchers do not speculate why this may be the case, they do speculate that this reduction in estrogen may be partly responsible for the increased testosterone.

In summary, ProLensis™ exerts several favorable effects on the hormonal milieu, documented in the table below.