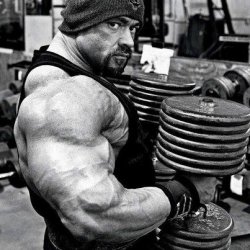 The large majority of my previous articles have focused on the needs of the steroid using BB’r and his/her unique goals, but there are plenty of other steroid using athletes out there whose goals do not reflect those of the typical BB’r. One frequently asked question that routinely applies to this demographic is “What drugs can I use to help increase my strength without adding bodyweight?” You might be expecting me to write out the perfect steroid cycle for accomplishing this objective, but it is a bit more complicated than that. You see, just as steroids are diverse in their effects on the body, so to does personal response to these drugs vary considerably. Just because one steroid might work great for one individual does not mean the next guy will encounter the same degree of success.

Nonetheless, when it comes to strength enhancement, decades of real-world experience in the BB’ing & strength communities have provided us with a pretty good idea of which drugs work the best for the largest percentage of individuals. While personal experimentation and occasional adjustments will likely need to occur before settling in on your ideal protocol, you can be sure there is a steroid or combination of steroids which is best suited for you. When careful selection is matched with proper application, the desired results are achieved.

It is important to understand that there is more to adding strength in the absence of bodyweight gains than drug selection alone. Diet and training will, by necessity, play a large role in bringing this to fruition because in truth, almost any AAS can add muscle tissue when added to a surplus of calories, along with intensive resistance training. In fact, diet is the single most important factor in maintaining bodyweight in the face of strength gains, regardless of the type of steroid(s) used. First and foremost, the key principle in maintaining bodyweight is to consume an amount of calories which does not exceed your metabolic requirements. One of the foundational rules of weight gain states that if you take in more calories than you burn, you will gain bodyweight…period. Therefore, it is an absolute requirement that your caloric intake remain commensurate with your metabolic needs. Since metabolism can vary so significantly among individuals, it is up to you to determine what your caloric requirements are if you are serious about maximizing strength gains without adding bodyweight.
In terms of training, the type of stimulus delivered can have a substantial impact on muscle mass accrual. By relying in muscle hypertrophy training in order to increase strength, you run a larger risk of increased bodyweight, compared to individuals who rely mostly on nervous system training. However, not all athletes are best served by relying predominantly on nervous system training, but require a hybrid system utilizing both training styles. It is possible to use hypertrophy training programs without adding additional body mass, as long as caloric intake is closely monitored and adjusted as necessary. Still, for those who desire to maximize their absolute strength without adding body mass, a heavy reliance on nervous system training may prove the most fruitful. This is why so many lighter powerlifters attempting to remain within a predetermined weight class frequently rely on a combination of nervous system training and technique over traditional hypertrophy programs.

I would like to side step one minute and address the issue of AAS-induced water retention and weight gain. All steroids can potentially result in water retention ranging from minor to severe. Obviously, this will lead to some degree weight gain. Regardless of how much water is retained, all of it is transient and will subside upon discontinuance of the offending steroid(s). This water retention can be either subcutaneous, intramuscular, or a combination of both, depending on the drug. Sub-q (subcutaneous) water retention is clearly visible and is what we normally refer to as “water retention”, as it is stored directly beneath the skin and results in a soft and puffy look. Intramuscular water retention is an equally common occurrence, but is stored directly inside muscle tissue. For this reason, I.M. water retention is undifferentiable from genuine muscle growth from a visual standpoint and is often interpreted as such, leading some athletes to slash calories unnecessarily in an effort to avoid permanent weight gain. Therefore, it is important to be able to differentiate between I.M. water retention and genuine muscle growth, but this knowledge can only come by way of self-education and personal experience with a particular steroid. Once the individual understands how he is affected by a specific drug, he will be able to determine with greater accuracy how much of the weight he has gained is muscle or just plain water.

It should also be noted that under the right circumstances, many steroids are often able to increase lean body mass when eating a maintenance amount of calories and sometimes, even when in a caloric deficit. This is due to the nutrient re-partitioning abilities of steroids, in general. So, if the lifter’s bodyweight begins to rise above and beyond what is due to simple water retention, he will want to discontinue the drug, lower the dosage, or reduce his calories in order to maintain his bodyweight. Some steroids do this better than others (Trenbolone is a good example), which is a dream come true for ranchers raising livestock for slaughter, but for athletes attempting to maintain bodyweight, this characteristic is potentially disadvantageous. This does not mean that all steroids which function in this capacity are unfeasible for use. In fact, some AAS in this group have performed impressively when it comes to improving strength without adding bodyweight (Trenbolone is an example yet again), but one should be aware of this issue, so it can be avoided if it starts to become a problem.

The circumstances a lifter/athlete finds himself in will determine which cycle might be optimal at any given time. For example, let’s take a look at a powerlifter. An off-cycle powerlifter who weighs 180 pounds and is seeking to remain within the 181 lb. weight class at competition will be able to utilize most of the different water retaining compounds during the off-season, as temporary water retention is of little concern. However, as the lifter approaches his competition, these drugs are often phased out in favor of AAS which lack this side effect. A lifter’s bodyweight in proximity to his weight class limit will usually have a significant bearing on what type of changes he makes to his pre-meet cycle.

The following is by no means an exhaustive list of AAS for this purpose and one should always keep in mind that variances in personal response and diet can have a dramatic influence on any steroid’s ability to build muscle mass and therefore, increase bodyweight. Since almost any steroid can be used off-season without fear of permanent weight gain (assuming diet is properly monitored), I am not going to list any AAS other than those which have built a reputation for increasing strength without adding bodyweight. In terms of oral AAS, Halotestin, Anavar, Winstrol, and Methyl DHT are some of the best, with Cheque Drops sometimes being employed as a last minute touch to a more complete cycle. When it comes to injectables AAS, Trenbolone, Masteron, and even higher dosed Primobolan have proven effective.

While the above AAS can certainly be used pre-meet and regularly are, I feel the need to point out that many powerlifters do not adhere strictly to this list pre-meet, but instead choose to employ water retaining steroids, while relying on various methods of dehydration in order to make weight. There are many different ways to go about making weight as a powerlifter, so the limited drug list here is designed more as a reference for those who haven’t yet learned all the ins and out of effectively making weight and need a fool-proof drug plan so they don’t accidentally go over their weight limit.

Now, when we are talking about athletes such as boxers, MMA fighter, etc, the need to maintain optimal cardiovascular performance for an extended period of time is crucial. In this instance, any excess water retention…or the dehydrating measures commonly employed by powerlifters to make weight, will negatively impact performance and for this reason, are usually avoided. Therefore, most of the water retaining drugs, especially in larger dosages, are not a good idea for this type of athlete right before a fight. In addition to the hindrance of excess water weight, some steroids are well known to decrease cardiovascular performance to a significant degree. Trenbolone serves as a prime example. In a powerlifter’s case, this decrease in cardiovascular output is of little relevance, but it can be devastating to athletes such as MMA fighters, boxers, sprinters, wrestlers, etc. For this reason, pre-comp cycles need to be tailored differently for athletes whose sport demands the utmost in cardiovascular endurance. Some of the very best drugs for the above mentioned athletes in the last few weeks leading up to their competition/fight are Halotestin (a very potent androgen which is good for strength and aggression without weight gain), Anavar (a strong anabolic noted for improvements in strength and muscular endurance without weight gain), Equipoise (another anabolic which in moderate dosages, will lead to considerable improvements in muscular and cardiovascular endurance due to its proficiency at increasing red blood cell count, with little to no weight gain), and testosterone propionate in lower dosages (which will help maintain normal physiological function, moderately improve RBC count, enhance recovery, and impart an alpha male mind-set similar to, let less dramatically than more potent androgens).

In the end, there are many ways to go about increasing one’s strength without affecting bodyweight, but listing a single best cycle is not possible, due to the presence of multiple variables which can impact the ultimate result. The above guidelines are designed to serve only as a reference point as you learn through personal experience and ongoing self-education what works best for you.