Big Waves in the Supplement Game 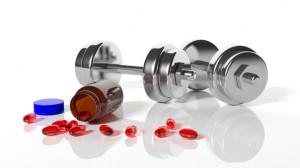 The bodybuilding industry is not exactly robust with breaking news. Aside from the occasional motorbike accident or mysterious arm wrestling tragedy, the only gossip that makes the major media outlets is usually tied into the supplement industry. We see the major players drop athletes, decide to not renew contracts, and throw money at new prospects on a regular basis and it’s basically a world of “what have you done for me lately”. While we tend to hype up these roaster changes like they are equal to an NFL team throwing millions of dollars to swallow up a new star, the fact is supplement companies are not teams in any functional sense and which Olympia competitor is signed to which company has very little effect on us as spectators and fans.

In the last week we have currently seen two plotlines unravel in the supplement industry pertaining to sponsored talent, and while they both involve a major bodybuilding star leaving a company they were synonymous with, the common threads end there. First off, Mr.Olympia Phil Heath announced he had parted ways with long time sponsor Muscletech, which came as a shock to many but not all, as Muscletech has been rumored to be removing themselves from a bodybuilding focus. Several days later, “Gifted Nutrition” was announced and so begins the first supplement line launched by an active Mr.Olympia title holder . Usually, this would be considered huge news in our small-town esque landscape of an industry, but coincidentally another set of announcements by a much smaller company has managed to cast a shadow over the Gifts new deal and steal the spotlight.

While those still stuck in the mid 2000’s are thumbing through 8 page ad-reports laden with brutally photoshopped training pictures in their monthly subscription magazines, a new generation of supplement companies has risen in the depths of online social media and shown us a glimpse into what the future of the business might very well look like. Forward thinking pioneers in the game such as Ironmag Labs, Blackstone Labs, and Prime Nutrition (and several others) have discovered that the old process of throwing large sums of money to reach out to an out-dated market might not be the best route, and that the online community gives instant access to your fans and also their feedback. This level of connectivity has brought these companies very close to their fanbase, and the old guard of businessmen locked up in board rooms taking 5 years to develop a marketing strategy which targets 18 year olds is going the way of the dinosaur.

Previously mentioned Prime Nutrition made gigantic waves recently by announcing the signing of ultra-popular Mr.Olympia competitor Evan Centopani. The news of this signing was a shock to many people and for several reasons; There was zero speculation or rumors floating around that Centopani was leaving his existing gig at Universal Nutrition, a company which he was considered by most fans to be the face of. This just added to the punch of the signing, which many also found shocking due to the infancy of Prime nutrition as a player in the supplement game. While we have seen brand new companies such as Gear Nutra sign several big name players in the fitness industry before even having products due to the fact they started through channels built from money earned previously in the supp business, Prime ceased to exist just a mere 10 months ago. The power of social media is a very real thing, as it helped this brand new company build into one that could overshadow industry giant Muscletech losing Mr.Olympia in record time.

It’s no coincidence that a company that uses ground-level personal marketing like Prime teaming with a bodybuilder such as Evan Centopani who has a 5-digit post count on online forums gets many bodybuilding fans excited. These guys are all bodybuilding fans who came into their roles while simultaneously being part of the audience, and it’s evident that this is a new breed of partnership between athlete and sponsor. To be frank, most athlete endorsement deals are basically paid permission to use a likeness to sell products, with the added stipulations of guest appearances and being present at their companies booth for any big expo. Centopani’s deal goes far beyond that, as press releases claim he will be an active executive within the company and not only have input in regards to business choices, but will also have creative control over upcoming formulations and products to be released. If these claims were made about almost any other bodybuilder, it would be easy to dismiss as a marketing tactic and assume their contributions wouldn’t extend past taste testing new flavors of pre-workout and choosing grape or orange. But Evan C. is different, known as a “thinking man’s bodybuilder”, his new role has been met with almost unanimous optimism.

Just to further solidify the fact that they are not toying around, not even a full work week went by without another bomb dropped from the Prime Nutrition camp, as ultra popular training and nutrition expert John Meadows was brought on board as a first move from the newly reinforced team. Meadows is an elite level amateur bodybuilder who has managed to build a following on par with the highest echelon of the IFBB while still on the quest for his pro card, and his popularity is only going to increase the momentum behind the upstart supplement manufacturer. Known for his dedication to maximizing muscle growth and his experimentation with “peri-workout” nutrition, it is safe to assume we are about to see a line of products geared towards John’s beliefs which will allow a much wider array of the bodybuilding public to utilize his methods and ideas.

For the first time, there is a level of honest excitement amongst muscle-building fans pertaining to roster shifts within sponsors. If you need any proof that a new generation of company and a new standard of fan interaction have come to the forefront and set the bar higher than it has been before, the fact that 13th place finisher Evan Centopani is a bigger news story that 3 time Mr.Olympia winner Phil Heath should be enough to convince you.