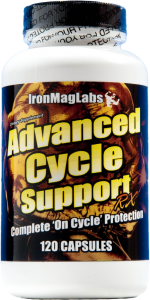 These days PCT has become such an integral component of steroid use, that it is nearly considered part of the cycle itself, but things were not always this way. It wasn’t until the 80’s that the concept of PCT began to emerge, although by and large, most did not engage in the practice at that time. For those who did, programs were simplistic in nature, typically utilizing a single S.E.R.M. for 4-6 weeks at the conclusion of a cycle.

As we moved into the early part of the 90’s, PCT was still used by the minority. It wasn’t until around the turn of the millennium that it became widely accepted as a standard part of cycling. Single drug S.E.R.M. therapy was still the norm, but soon we would start seeing BB’rs combine S.E.R.M.s and HCG in order to further expedite recovery. Originally designed as a fertility drug for women, HCG was used either on-cycle or introduced at the tail-end of one’s cycle in preparation for the S.E.R.M therapy to come.

Right around this time we saw another class of drugs rise to prominence in the PCT world. These are the aromatase inhibitors. Although 1st generation A.I’s entered the market decades prior, BB’rs did not immediately recognize their potential as a treatment option for testosterone restoration. However, within the last 7-8 years we have seen multiple clinical trials prove their testosterone boosting ability, with several studies demonstrating an increase in testosterone comparable to S.E.R.Ms, such as Clomid and Nolvadex. Now validated by science as a legitimate PCT drug, we began to see BB’rs everywhere start including them in their programs with regularity.

Throughout the last 30 years our understanding of PCT and the drugs available to us have improved considerably, yet with each new development, BB’rs have made the restoration of testosterone the sole focal point of recovery. While there is no doubt that restoring levels of this hormone is crucial to the maintenance of off-cycle muscle mass and will minimize our chances of requiring testosterone replacement therapy later in life (there is no guarantee), little attention has been given to sperm production-motility.

This can cause a real problem for long-term BB’rs who desire to start a family, but also wish to continue pursuing their BB’ing dream. In days past the only thing that could be done was go off all AAS, hit PCT hard (particularly Clomid), and remain off until conception. Being that even normal couples with fully functioning reproductive systems can take months or even years to conceive, this can be devastating to those with serious competitive ambitions. Of course, there are many BB’rs who are not yet ready to start a family, but who none the less wish to maintain functioning of the reproductive system, rather than make an attempt to restore it after years of shut-down.

Unless you are an older BB’r who already has a family, common sense dictates that the maintenance of both testosterone & sperm production is superior to the maintenance of testosterone production alone. However, it would be unfair to lay the blame for fertility issues entirely at the foot of BB’rs. The absence of drugs capable of maintaining on-cycle fertility have certainly played a role, as have the steroid habits of modern day BB’rs, in which taking little to no time off throughout the year has become commonplace. While many BB’rs perceive this as necessary for competitive success, it doesn’t bode well for reproductive health.

Up until just recently, the only drug we had which was capable of maintaining testicular function in the presence of AAS was HCG, but this compound is incapable of initiating the type of comprehensive recovery needed to maintain full functioning of the testes. For those of you unfamiliar with HMG, allow me to introduce you to this exciting new product, as we compare the differences between HCG and HMG below.

For decades BB’rs have been using HCG both on-cycle and off-cycle to prevent testicular atrophy, as well as help re-grow the tests prior to commencing PCT. HCG, known as Human Chorionic Gonadotropin, accomplishes this function by mimicking the actions of LH (leutinizing hormone) within the body, which is the hormone responsible for stimulating testosterone production. Aside from the obvious cosmetic benefits associated with testicular maintenance, retaining function of the testes helps set the stage for a more rapid post-cycle recovery by retaining the organ’s ability to respond optimally to circulating LH.

While restoring testosterone production is an important step towards restoration of the HPTA, it is in only one aspect of total recovery. In addition to testosterone, the testes are also responsible for the production of sperm. In the same way that AAS suppress LH release, they also suppress FSH; the hormone necessary for sperm production. The bad news is that HCG doesn’t do anything for sperm count or motility. Its only function is to increase testosterone levels. Because of this, many HCG using BB’rs suffer from fertility issues.

Enter HMG (human menopausal gonadotropin). Unlike HCG, HMG has the distinct ability to normalize/maintain both testosterone and sperm production simultaneously. Unlike HCG, HMG does not rely on mimetics in order to achieve the desired result. Rather, it promotes production through natural means. HMG is actually a dual-drug, being comprised of the pituitary hormones LH and FSH. LH, which was mentioned above, is the hormone which simulates testosterone production, while FSH (follicle stimulating hormone) is the primary hormone responsible for the manufacture of sperm. Both hormones must be present in order to maintain/regain full functioning of the testicles.

Taking this information into consideration, it is hard to see HMG as anything other than the superior recovery/maintenance agent. After all, HCG only provides a partial recovery and it does so through un-natural means (as a mimetic). HMG can be employed with good effect at any time, but like HCG, it should be discontinued prior to starting S.E.R.M therapy (Clomid, Nolvadex, etc), as the continued presence of exogenous LH & FSH will have an inhibitory impact on the endogenous production of these hormones.

While this drug is still new, its popularity is rapidly increasing and I am confident that within the next few years, it will replace HCG as the recovery/maintenance product of choice. Regarding dosing & duration of use, the jury is still out on this one. Like HCG, HMG was originally formulated for women, so dosing guidelines recommended by the manufacturer are not applicable to men. I have seen multiple online recommendations for this drug, some of which vary significantly, but not a single one of them have been accompanied by any type of anecdotal, let alone clinical evidence to support their claims. I would imagine a brief look into male physiology would provide us with a good starting point, though.
In conclusion, if you are looking for a more comprehensive recovery than what HCG can provide, you might want to consider trying HMG next time out. The price is reasonable and availability is currently moderate-high. For those specifically interested in fertility, it is a no-brainer.