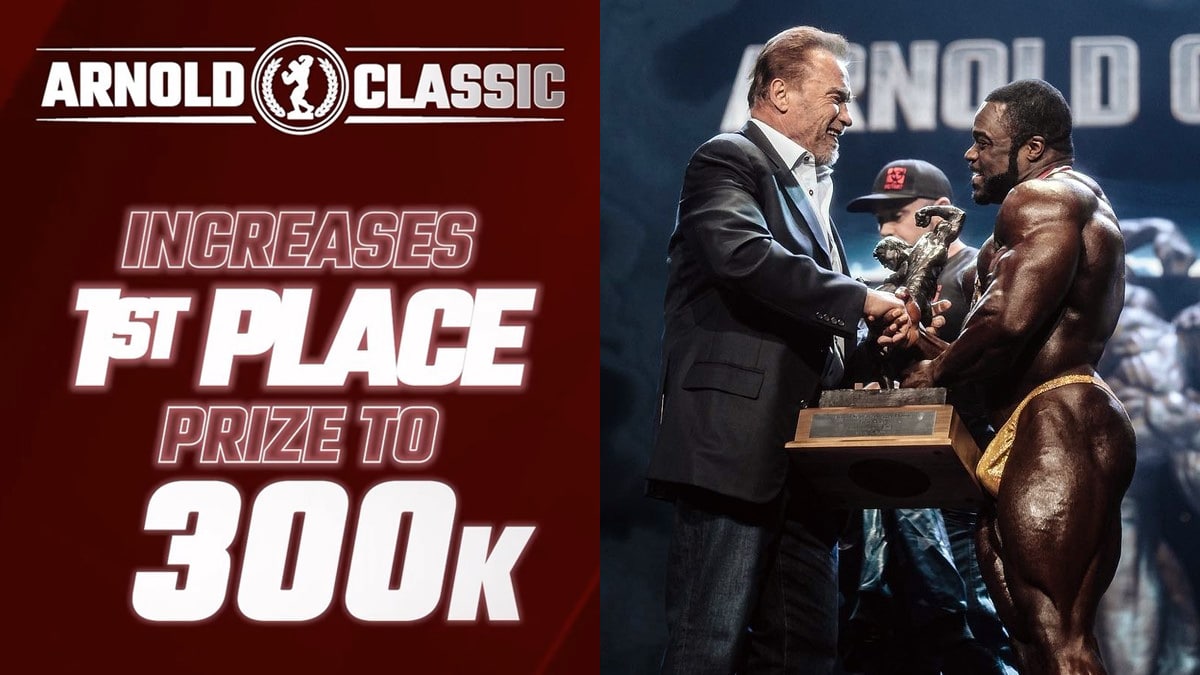 The 2023 Arnold Classic is in big trouble. Just a few weeks ago, the 2023 NPC Arnold Amateur was “indefinitely postponed,” then put back on schedule a couple days later. In the ensuing weeks the Arnold Classic Men’s Open Bodybuilding roster was at 9, then 8, then 7, then 6. Then Anold added $100,000 to the pot, making the total payday for the bodybuilding champion $300,000.

As a result of that measure, former Arnold champion and 2023 Mr. Olympia second-runner-up Nick “The Mutant” Walker jumped in. To date, there’s 9 guys doing the show, but the contest remains in trouble because out of the 9 guys they have, they only have two from last year’s Olympia Top 6. And while there’s two 212 Mr. Olympias in the mix, this lineup may be an easy pay day for Walker.

Will there be any real battles ihere besides Nick potentially facing off against William Bonac and Samson Douda? That remains to be seen. What is abundantly clear is that the Arnold Classic no longer has the draw that it once did. $200k isn’t exactly chump’s change, but for Arnold to have to dig into his pockets and add $100k six weeks out is a very bad precedent to set.

The fact is competitor numbers are down. They’re down with local shows, regional shows, and some believe the same might be said for national shows. When it comes to the amateurs, there’s contests where classic physique numbers are exceeding bodybuilder numbers. There’s also a number of contests where males are outnumbering females. That’s unprecedented since the days prior to the introduction of the Bikini category. That’s why so many promoters are alarmed and why it’s anyone’s guess why less and less people are signing up to the contests. Cost might be a pretty obvious culprit. Depending on what federation you compete in, some are charging for absolutely everything imaginable. And with the chance to compete in various classes and even divisions, cross-overs are accounting for a lion’s share of the proceeds. A competitor could easily do several classes, as well as one, two, or even three divisions. Then they have to pay for their card (which allows them to compete) and then they have to pay for all the extras (e.g. hair, tanning, makeup, etc). If you compete nowadays, you can only use the official tanner and/or the official MUA. If you’re caught using another tanner on the premises you can be disqualified and a little dark cloud will follow over you wherever you go. It’s serious business if competing is where your heart and soul is.

Cost might be a major culprit for the amateurs, but let me assure it is one for the pro’s as well. When you turn pro, it’s not like you have sponsors pounding on your front door. You don’t suddenly hear from countless people screaming “let us sponsor you!” That’s just not how the cookie crumbles in physique-based sports. Pro cards are being given out like candy and company owners who are old enough to remember what the sport looked like when it was only bodybuilding and figure, aren’t too impressed today. The pro card might be the icebreaker but they want to see social media numbers. They want to see a prospective sign as someone who has a giant following, who has real influence over their followers, and who can put numbers on the board before the ink dries on their contract. Anything short of that is hot air and smoke. Companies are more than keen today; they’re downright skeptics and athletes who want a shot need to prove them wrong. This is why there’s such a scarcity of contracts for actively competing amateur and even pro competitors.

The companies would rather see the athlete use the time that’s required to prepare for a contest, used to grow, maintain, and expand audiences on social media. They care very little for trophies, placings, and accolades from the stage. And that’s because these distinctions do not translate to sales. And spare me on “good will.” Companies are keen to that hustle too. You can’t pay the rent, keep the lights on, or pay staff with good will. So I’d say this accounts for a great deal of why so many top paid athlete-influencers are in great shape and plugging away on social media but not competing. If they wanted to compete they’d have to self-fund themselves. Even if they won the show, their sponsors still wouldn’t reimburse them, much less give them bonuses. Most supplement companies are totally over the whole show thing.

Adding to cost is the exhaustion factor. I know that many purists of the sport would have laughed at the contention that athletes who do one show (the Olympia) per year could be exhausted. But it’s a totally different age. Forget the days of guys like Darrem Charles who could do ten shows in a year and still be ready for more. Most of the top guys today will do the Olympia, take a vacation, and then prepare for six months for the Super Bowl of Bodybuilding. And even with Arnold adding $100k to the mix, it’s still unlikely to get them to budge. You must understand that they want to be the best and winning the SECOND biggest show, the SECOND most important show, is of little interest to them. Besides most of the guys from the Olympia Top 6 have either already won the ASC title or would rather give 100% to winning the 2023 O than sacrificing even 10-15% to win $300k. And even though the Olympia is some eight months after Arnold, call it superstition, but they just don’t want to chance not giving the Olympia 100%.

On the one hand this unreasonableness may seem absurd, but on the other hand it shows a very real commitment to being the best. You can win the Arnold, the NY Pro, or the Tampa Pro. That would make you a champion, but it wouldn’t make you the best in the world. The Olympia Top 6 are all automatically qualified so why chance it on any other show? $300k is big money, but who is really going to beat Nick Walker or William Bonac at 100%? If they could, they’d have to really push themselves and if they accomplished that, could they push themselves equally as hard eight months later in Orlando, FL? Guys from the 90’s needn’t be asked such a silly question, but guys today, that’s a whole other story. It’s a totally different time in the sport of bodybuilding.

I’m sure there may be more guys throwing their hat in the ring and who knows the 2023 Arnold Classic may have double-digit numbers, but a great many of them will be scrubs. Many of them will be guys who would’ve made second, third, or fourth callouts at the Olympia. The Arnold may have the quantity, but they certainly won’t have the quality. And paying out $300k for a weak lineup is bad business. I’ve said it many times and I’ll say it many more, the Arnold Classic franchise is in big trouble.