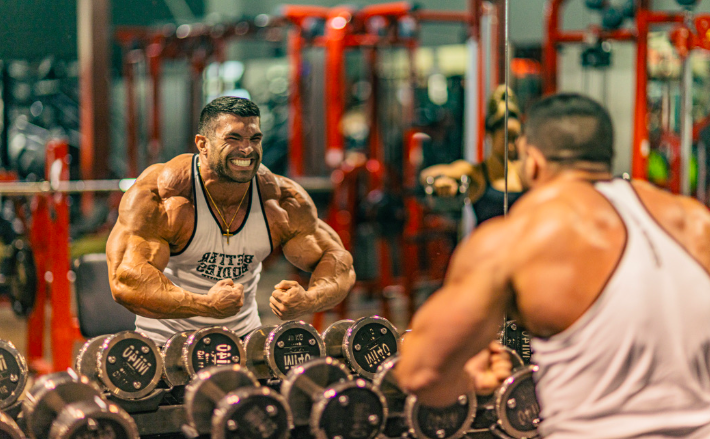 Ever since Derek received the special invite – or special handout as I like to call it – so many people have been in my DM’s and in my email trying to make the case that the young 212 champion may in fact win the open. While I always appreciate feedback and I always listen to what the readers have to say I must admit that I have always believed he could win the title. I just felt that he should have qualified for it like everybody else.

I have been a Derek Lunsford fan for a long time and in fact we did many appearances together here in Louisville; however, that does not change the fact that I believe that the Mr. Olympia is the Super Bowl of bodybuilding. What that means is that every single person on that stage should have either automatically qualified, qualified because of being a former Mr. Olympia, or qualified through points. That being said Derek will be one of the most dangerous bodybuilders on that stage alongside Brandon, Nick, and reigning champion Big Ramy. That as much as we can agree on. Further emails on this matter are not needed. Lol.

With regards to how he will place will have a lot to do with the final 48 hours. I have seen Derek have a fantastic contest prep only to get sabotaged the final 48 hours. But that’s not exclusive to him. Many bodybuilders will make ridiculous progress in the off-season and maintain much of their muscle during prep but something they do may deviate from the plan & may cost them the entire effort. Sometimes it can be something like cheating on a diet, not getting enough training in, or something totally out of their control.

For example when you look at what happened at the Recent Arnold UK you can see how the world around you can and will affect how you prepare for the stage. No competitor can tell me that they were in such deep tunnel vision but they were not affected by the possibility of the show not happening or of not getting paid. Every competitor is human; therefore, external factors do contribute to how they end up looking on stage. Cortisol levels, in particular, should be monitored and be kept in check at all costs.

While I don’t think Derek wants to relive 2019 by any means I think that the exposure he received that year toughened him for battle in years to come. Back in 2019 he had so much pressure on his shoulders that it made his preparations for the biggest show of his life all the more daunting. Although much of the blame fell squarely on the media‘s shoulders a lot of it was on his as well. He wasn’t thrown into the spotlight he also helped himself get put into that position. He was enjoying the buzz and he was enjoying being the center of attention. Unfortunately it created such a level of stress that I believe it directly sabotaged him for that year‘s Olympia.

Moreover the special invite has also allowed for him to have what no other competitor has been able to have and that is a peaceful and uneventful contest prep. His only obligations for much of the year have been those to his sponsor and to maintain his social media. He has done many fun appearances like Pittsburgh, he has created some amazing content with some of the best photographers on the planet, and he has been able to maintain strong ties to the fans. Beyond that everything has been about eating, taking his supplements, and training hard. This is why he was able to transform his physique in just a matter of months. That being said m, however, now the spotlight is back on him. Everyone is looking at him because he can realistically stand next to Brandon or Ramy and walk away with the victory. And no one knows that more than the competition.

The one thing that we can say about Derek is that he’s not a dark horse by any stretch of the imagination. The media knows what he’s capable of, the judges know what he’s capable of, and every man on that stage knows that he is extremely dangerous. One gentleman in particular who has definitely become aware of the risk factor of Lunsford’s presence is Nick Walker. The Mutant was the hottest thing since sliced bread up until the special invite to Derek was announced. He should have known when he posed next to Derek in Pittsburgh that the 212 champ would be standing next to him in Las Vegas Nevada at the Zappos Theater this December. And if you ask most people the fight is not between Lunsford and Walker rather it’s between Lunsford and last year‘s top three. The reality of the matter is Derek can beat Hadi, Brandon, and maybe even Ramy. Not only can he beat them in reality but I think he can beat them on paper as well which is something that I don’t think will ever happen again for Brandon.

In my estimation there’s a difference between the people’s winner and the actual winner. In my opinion last year Brandon wiped the floor with Ramy. I have made no secret about that. Everybody and their mom knows that I believe Brandon was robbed last year. To a great many people Brandon won the competition in 2021 much like Nasser won it 97, but in actuality the defending champion kept the title. I believe that in a similar situation between Lunsford and Ramy that Lunsford would actually walk away with the win. You can call that politics or you can simply call that reality. I personally don’t believe in politics and I don’t believe in favoritism I just believe that life has a funny way of playing itself out. For whatever reason I don’t think Brandon will ever regain his title even though he has been the best man on the stage.

Derek on the other hand I think it’s clear has the support of powerful people and is a people favorite as well. I don’t think we can argue that point since he received a special invite when he could’ve perfectly gone out and qualified for a show. He didn’t have a pandemic to deal with, he didn’t have to serve in the military, and he wasn’t coming out of a long retirement like Kai Greene. He was just a guy who won the top title in his division and wanted to try a new division. There were no extenuating circumstances or change circumstances that created a substantial need for Lunsford. The promoter simply wanted to sell more tickets and they invited him. End of story.

That being said this is an invite that has some teeth to it. Very much like the invite for Ramy back in 2020 where the guy brought his absolute best physique to the stage and walked away with a victory so too is Derek doing his homework. He is taking this competition probably more seriously than any other show in his entire life. Just one look at the shots with professional photographers and you can tell that he has vastly improved his look. What’s insane is that his starting point was already leagues ahead of many of the guys he will be up against in Las Vegas come December. What he has done is nothing short of a calculated road to victory. He is going to Las Vegas because he wants to be the next open Mr. Olympia. He is not looking to just make a good impression or to get a decent placing. He is going there with victory in mind. And the reality of the matter is that the defending champion for as big as he is has been just a complete disappointment as an ambassador. I believe Derek could actually grow the sport by leaps and bounds as compared to his predecessor.

That being said as much as I like him as a person and as great of a physique I think that he may have I will not respect him the same way that I respect Mr. Olympias that earned their place in history. This is why I have major issues with Big Ramy and why I am often times a little hard on him. He is a very nice person but he is not someone who can say won the title after qualifying like everyone else. Special invites, bail outs, handouts – these are all things given to people that cannot do it on their own. History is not kind to folks who cut to the front of the line.

That being said when it’s all said and done and there’s 15 guys on stage I do believe Derek will be an automatic top six. Beyond that it will only be a question of his prep, his mindset, and how badly he wants it to see how high up the Top 6 he will be. He could totally win the show or place top three or top six. Where do you think the former 212 Mr. Olympia will place at the 2022 open Mr. Olympia?