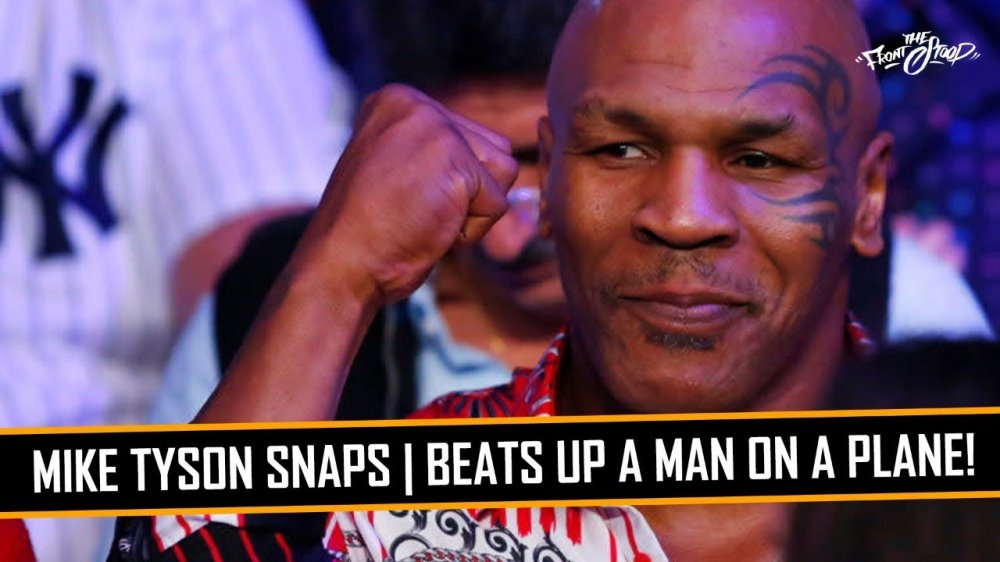 Anyone who was around in the 80’s, especially if you grew up watching TV at the time, you know firsthand about the stopping power of Iron Mike Tyson. He dropped some of the biggest names in boxing during his heyday. Some guys didn’t even last a round. Hell, some guys got knocked out in just a minute. He was fast, hit hard, and could take a punch. His victories were indisputable. He used street-smarts and technique, and was just straight-up dangerous.

A lot of times when someone has a win, there’s a certain element of luck involved. It might not play a major role, but it’s there. With Iron Mike, there was no luck. When he was going strong, no one could hold a candle to him. And if he didn’t like you, you were basically SOL; he was going to destroy you. Just one look at him, and you just knew better. That said, he had a sense of humor. Everyone knows Mike has a high voice and plenty of comedians liked to write jokes that would exploit that. But Tyson had a sense of humor; he understood that this wasn’t personal and that at the end of the day, all comedians are trying to do, is make a living. Not only could Mike take the joke, but he’d laugh too.

So having established all that, it should be abundantly clear that the former boxing champ was tough as nails, but was down to earth as well. That said, let me reiterate that he was a badass, is a badass, and could obliterate a lay person. But if that wasn’t obvious enough, some punk on a flight pressed his luck. A fellow passenger on a flight shared with Tyson, who may have been drunk, started taunting the former undisputed boxing champion of the world. The man, who was seated behind Tyson, was on his feet, practically talking into the champ’s ear. This went on and on for quite some time, until Tyson snapped and began slapping him. The troll had a couple small cuts on his face, but it seems his buddies were taping the whole thing. Needless to say, it went viral, making the rounds on TMZ, other paparazzi programs, and through the net, from message boards to Pinterest. It seems everyone was talking about this story, especially once the Smith/Rock slap news fizzled out. What’s worse is that unlike that other slap issue, Tyson couldn’t walk away. He was in the air, in a cylindrical tube, and the trolling was taking place at his seat. Where was he to go? He could have asked that guy a million times to stop, but if he was drunk and his buddy was taping, what could have come from that, that didn’t. Maybe the whole thing was a set-up. Maybe they figured it’d be a great way to get famous, their video goes viral, and they sue and settle with Tyson.

This is a problem facing countless movie stars, famous musicians, and maybe even big-enough members of the fitness industry. Actually, what am I saying? Of course it happens to mega famous fitness stars. Who can forget what Propet Muscle did to Rich Piana? Who can forget Eric Kanetsy or Cassidy Campbell doing skits at fitness expos. Some of these performances can go to some pretty uncomfortable lengths. And sure, they end up telling the victims what’s up at the end, but I’ve seen goofs that have to go so far to be believable, that the victims might snap (like Tyson did), long before the comedic actor is able to say the whole thing is fake. What happens then? It’s like that TV show, What Would You Do on ABC. I’ve often wondered what happens if the people that are unaware, just snap and go apeshit, before the show tells them it’s all a social experiment. I wouldn’t want to be one of those actors, I’ll tell you that; however, what if the skit isn’t a skit? What if you have a troll who thinks they can abuse a celebrity, in front of tons of people, and bank on the fact the poor A Lister will be forced to just take it. It could range from false imprisonment to assault and even battery, but the celeb is expected to just take it? I’ve seen celeb’s parents and kids get hit by aggressive cameramen, but if a celeb snaps, the public outcry, not to mention the litigation, is overwhelming.

I honestly think the guy who was trolling and taunting Tyson, figured he could bully him, with a captive audience, while his friend taped, and the champ would just have to take it. He’d have to sit there, trying his best to ignore the provocations, staring into the seat in front of him, powerless to do or say anything for the remainder of the flight. That right there is what should be prosecuted, but that’s not how the legal system works.

All that troll was doing, was compounding the level of anger and frustration in Tyson. When Tyson snapped, he just lost it. He didn’t slap the guys once or twice – it was just a series of them. I couldn’t even count how many times Tyson slapped the guy. In a very real way, he was lucky Mike wasn’t laying in punches. Could anyone imagine the kind of damage an angry Tike Tyson could inflict throwing punches at a seated individual who probably wasn’t guarding his face effectively at all? Also, the former champ is shredded, lifts often, and has a boxing school. You know he’s hitting the bag at least two or three times a week. This could have been far, far worse, but he showed restraint on some level. Maybe it was conscious, maybe it was subconscious, but this guy should be thankful. Yeah, I said it– thankful.

We’ve seen other celebs snap. Like I said, the paparazzi don’t care about kids, elders, or even the disabled. They need pictures, video, and they’ll stop at nothing to get them. They’ll impede traffic, jump fences, and even use drones. And in those situations, it’s not a punk instigator with his buddy taping with a phone, rather, the whole mob “media” are the punks and the celebrity has very few means of recourse. This is why so many of them live behind high walls, fences, and have guard dogs and security personnel. Some A Listers have built homes that resemble fortresses and communities that have numerous stars (e.g. Beverly Hills, South Beach, Nashville) have great compounds that mirror The Green Zone in Baghdad. Even the most exclusive and restrictive of gated communities – islands even – still have vulnerabilities and eventually, they too, get overrun by trolling fans and aggressive media.

That said, this case here was probably one of the worst. I can honestly say, I’ve never seen a lone celeb, heckled, in such close proximity in a situation where the celeb has nowhere to go. I’m actually surprised that airline staff didn’t intervene. Maybe they had or maybe they were planning on it, but I’m not exactly sure what Tyson could have done, besides snap. He wasn’t going to be able to reason with the troll and I don’t think sitting in a lavatory is a reasonable option, either.

I wonder if this guy is going to press charges, even though he instigated the whole thing? I wonder how many people, from media to fans to elected officials, will try to publicly condemn Iron Mike. What say you? Should we throw the book at the former champ, in the court of public opinion, or is that something understandable given the scenario? I never believe violence – of any sort – is the answer, but everyone has a breaking point. This troll may not have put his hands on Tyson, but he was intentionally tormenting him. Thoughts?