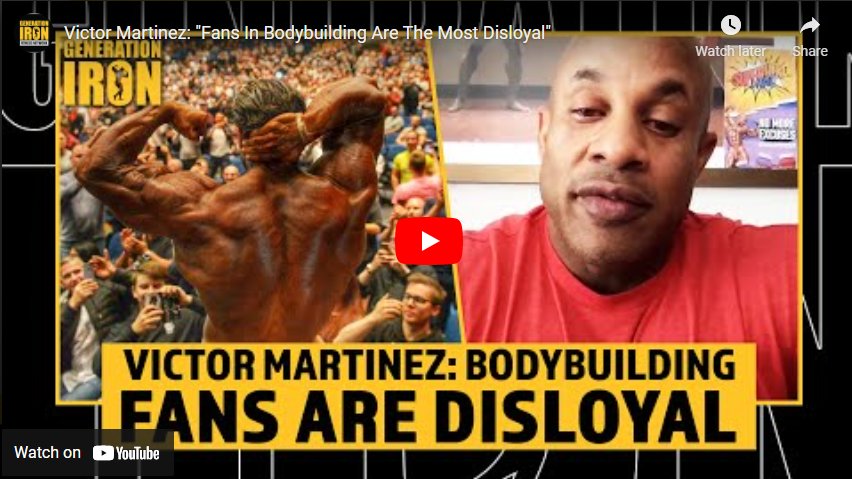 I’ve always been a fan of Victor Martinez, and when I would travel to New Jersey on business, I would always make it a point (even if it were out of my way) to drive to Edgewater to eat at his Muscle Maker Grill location.

Victor doesn’t know me from a hole in the wall as I’m not some fanboy who is going to bother him at his business when he’s trying to get stuff done or hit him up on social media like some crazy stalker. I simply support the guy and appreciate what he’s done for the sport of bodybuilding. But I recently saw an interview with him that I really don’t agree with.

Again, I want to reiterate that I have nothing against Victor. This article isn’t a personal shot at him, but more of a difference of opinions based on what he said.

In a recent Generation Iron YouTube video, Victor was questioned about his thoughts regarding the bodybuilding fanbase and if he felt pressure from fans following his prison sentence and loss of size.

The first thing Victor said was, “hell no.” Which I’m glad he wasn’t bothered by some people thinking he was done and will never do well in the sport ever again. But in the next breath, he started talking about the comments he would read on websites about him. To be honest, that doesn’t sound like someone who doesn’t care what people think. Why go out in search of comments if, in the end, they mean nothing to you? So, from the start, that made no sense.

He then gets into Arnold’s comments following his “Screw your freedom” statement and mentions that further shows that fans are disloyal. I’m going to voice my opinion here, and people can obviously disagree, but were Arnold’s words taken out of context? Some may say so. But for an immigrant to come to the US and be in his position, his choice of words (in my opinion) was horrible.

To ever say, “Screw your freedom,” when your following and financial freedom were built off the ability to live free, capitalism, etc., he should have never had those words come out of his mouth. If bashing Arnold for saying that is being disloyal, then Arnold is disloyal to the US and what it was built upon. But this article isn’t about Arnold.

Moving along with Victor’s interview, he then said that maybe other sports have more loyal fans than bodybuilding. Here’s my take on that. I have never seen anyone completely flip who they follow in the IFBB. Those who follow Phil Heath are diehard Phil fans. Even after he lost the Olympia, no one turned their back on him. Did people question his future? Sure. But that’s all opinionated and speculation. It’s not a matter of someone being disloyal or turning their backs on him. And people have the ability to follow more than one bodybuilder, which leads me to my next major point.

You Were in Prison… Bro.

What I think happened with Victor is that after his arrest, people moved on. Why would someone necessarily stick with him if he’s not competing? They have other bodybuilders that they also follow and support.

I think one of the hardest things to go through was what Shawn Rhoden experienced. He went from winning the Olympia to allegations of rape in a matter of months. The IFBB banned him from competing, and the bodybuilding industry was questioning what the right decision to make was and whether or not Shawn was innocent or guilty. Regardless, fans moved on and started following competitors who were able to compete since there was really nothing to follow with Shawn other than his life since he wasn’t able to step on stage.

Victor’s situation is (kinda) similar to Shawn’s in that he couldn’t compete when he was locked up, and therefore, fans moved on. If someone followed Michael Jordan and was a fan, they’re still a fan to this day, but they may have moved on to being a fan of LeBron now since he’s actually playing. That doesn’t mean people forgot about MJ, and they’re disloyal.

I don’t think anyone would argue that Victor was anything but a great competitor. Whether they moved on or not, when was the last time we saw Victor on stage? There’s my point.

Jay Cutler, after retiring, is doing just fine. His fans still follow him, they buy his stuff, they listen to his podcast, and they watch his YouTube channel. What is Victor doing? *crickets*

If anything, Victor bailed on his fans, not the other way around. He’s doing nothing for his fans right now other than trying to sell things on his Dominican Dominator website. So, what real value is Victor providing fans? Does he have a YouTube channel or podcast to provide his fans with the ability to follow him and get value and information from him? No. Everyone has to pay for something in order to engage with him. That’s not what other people are doing. So, what’s the point? It’s not like we are talking about an Olympia winner who took home a Sandow and is in the history books.

People are judged by their actions, not their words. Victor can say whatever he wants, but the majority of IFBB pros never went to jail or had issues with the law. And that’s not a knock at Victor, it’s just the truth. Victor went to prison, which is why it seems like all of a sudden, he feels that people turned their back on him and said his career in the sport was over.

Moving along, he continues to say he doesn’t care what people say about him. Then he rolls right into how people on the internet were saying he’s going to get deported back to the Dominican Republic, which he then said, and I quote, “I want you bitches [sic] I’m a citizen, you know, screw you mother*ckers.” Does that really sound like someone who doesn’t care what others say?

Listen, all in all, I have nothing against Victor Martinez. If he comes back to the stage, I’ll still support him. If he stays away from the stage, focuses on his health and longevity, and wants to build his various businesses, I’ll support him. But to say that bodybuilding fans are disloyal is not accurate.