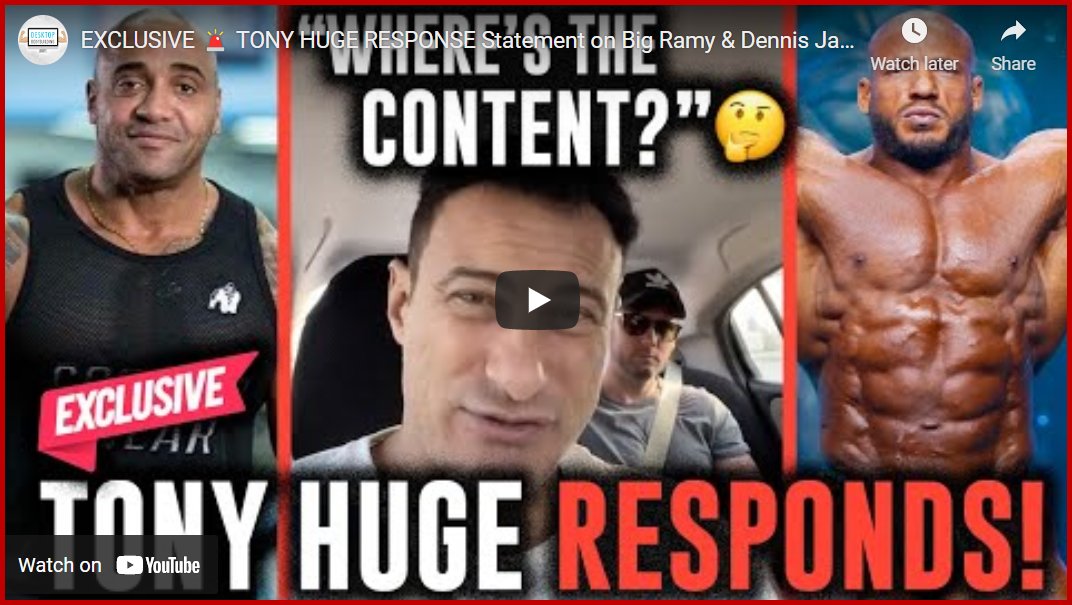 Sometimes in life you really have to choose your battles. If you feel like you got the short end of the stick you need to take some time to take a step back. I’m sure you’ve heard the expression “cooler heads will prevail” and take a look at “the big picture.” Well this is definitely something I’m sure Dennis James wishes he had done prior to doing a video with some unsuspecting fellow pro’s trying to throw shade at Tony Huge and Enhanced Labs.

While the story got the hits and several media hubs jumped at the chance to report its contents to the bodybuilding masses I don’t think Dennis could have anticipated where the chips would fall. Everything was going according to plan. From Dennis breaking his silence to the expected backlash from hardcore Ramy fans. Many of these folks have been in the dark for months. They visit all the bodybuilding websites. Some have even rejoined dormant forums and Facebook groups all in hopes of getting some info on where the reigning 2x Mr. Olympia is. I suspect that James was banking on this restless bunch in his quest to turn public opinion on his former sponsors. I’d say it worked for a few hours but that all came to an end with Tony Huge’s response.

Dennis severely miscalculated how his adversaries would respond to his attacks. Had this been a feud with a fellow lunkhead it might have gone one of two ways. There’d either be a decisive win or it would drag on to the point of being shelved as a stalemate. Tony, on the other hand, is not your average competitor or business owner. He’s a real influencer with a real following and a lawyer’s mind. I knew from the moment Dennis struck first blood that he would end the match on his back.

The key to winning a social media battle rests largely on assessing the situation closely. First of all do you have the facts to support you? It isn’t necessary to be factually correct in order to win a fight but it doesn’t hurt. That said those that have been done wrong are not the only ones to lash out. There are many situations when someone who is totally in the wrong will still pick a fight. The motivation might center on notoriety and/or relevance.

A lot of time trolls go into a fight knowing that they’re wrong and knowing they will lose. If they manage to get attention out of it that’s a win. If RX or MD cover the story or I write an article for Iron Magazine for example – that’s a win. Now I’m not suggesting that a former decorated IFBB Pro with employment links to the Olympia Weekend would be a troll, but I would say what Dennis did amounts to bringing a knife to a gunfight. It was all over the second Tony gave a response. The only way James would have prevailed would have been if Tony stayed silent. In reality that would have been taking the high road, but Tony/Enhanced already did that once before. When Dennis took a swing he was asking for it.

Let’s not forget a couple of key points. Number one, Ramy was dropped. By Dennis’ antics we all now know that the break wasn’t mutual. Dennis thinks he was screwed and thinks Ramy was taken advantage of. That alone takes any concept of an amicable, mutual break off the table. That said even though Ramy and his sidekick were kicked to the curb Enhanced sold it as a mutual break. They could have said Mr. Olympia was a bum. They could have said he breached his contract. They also could have trashed Dennis.

His only job was to get Ramy to produce content. Whether you want to call that a liaison or a gopher is entirely your call. He wasn’t signed because of his physique or his knowledge on training. They didn’t want him to talk about optimum ways to use Enhanced supps to burn fat. They also didn’t give two shits about his weekly YouTube show or his favorite restaurant choices in Thailand. They didn’t care if he wore Enhanced shirts or tagged Enhanced on his posts. Dennis wasn’t the star. He was the guy who reminded the star to put the fishing pole down, take a selfie, and post it. Lord only knows how much he was being paid for basically doing nothing. In any event Ramy ended up ghosting the sport and that was that. It’s not even that DJ couldn’t get Ramy to post – he didn’t even know where Ramy was. It’s like the guy could mess up boiling water.

Enhanced could have had a field day with these two. They could have told the world why they were canned but they opted to put them in a good light. You’ll notice Ramy hasn’t said a thing. He was the star and he was the reason they even looked twice at Dennis. He was also the one making over a million a year. If he wasn’t upset doesn’t that say something?

Even with James and Enhanced sparring Ramy still hasn’t said anything. Maybe he wasn’t into the deal and maybe he’s pretty much done with the sport. What’s in it for him? He could probably make a million in a month so why does he need half a million when it requires him traveling and staying in America for a week and having to kiss tons of ass and diet down? It doesn’t make sense for him and that’s something Tony Huge has stated on two separate occasions. Ramy has no trouble making money. His sidekick might however. Therefore it might be time for Dennis to find someone new to leach off of. I mean “help.”

Once Dennis struck second blood then Tony responded. Not only did he reiterate his previous statement but expounded on the fact that Dennis and Ramy didn’t deliver. They were essentially useless to a company shelling out major dollars. He did use the opportunity to note that Dennis put in great effort at trashing him and his company and that if he could put similar effort into promoting the company that he and Ramy could find a home with EL again. Who does that? Who gives someone another employment opportunity after they tried to trash your character and that of your brand? It’s an easy answer.

None of this was personal. Enhanced is a company that makes a lot of money. They don’t do hurt feelings. Tony Huge is larger than ever, with millions of fans all around the world. James’ insults bounced off of him. Tony is also not in the hurt feelings dept. He doesn’t analyze and study them. He analyzes and studies PED’s and looks for new ways to get jacked. He’s about making money and seeing the world. That’s why he didn’t respond to DJ in anger. There’s no ill will there. It’s simply a question of making money.

I suspect Dennis will continue to take shots at Tony and Enhnaced just like he does with Oxygen Gym. Eventually I could even see Dennis turn on Ramy. Imagine if Ramy had taken the new deal that cut him out. Does anyone think DJ would have taken that well? As Ramy withdraws more and more to being a Middle East star, the language barrier alone will keep DJ from sharing in the proceeds of Ramy’s starpower.

Everything comes down to money. Everything. It’s Tony’s motivation, Dennis’, and Ramy’s. Money is what makes the world go round. Some work for it and others have their hands out for it. When it comes to the Enhanced deal the gravy train came to a screeching halt. When both sides put their cards on the table there was but one winner. The rest is endless bullshit.