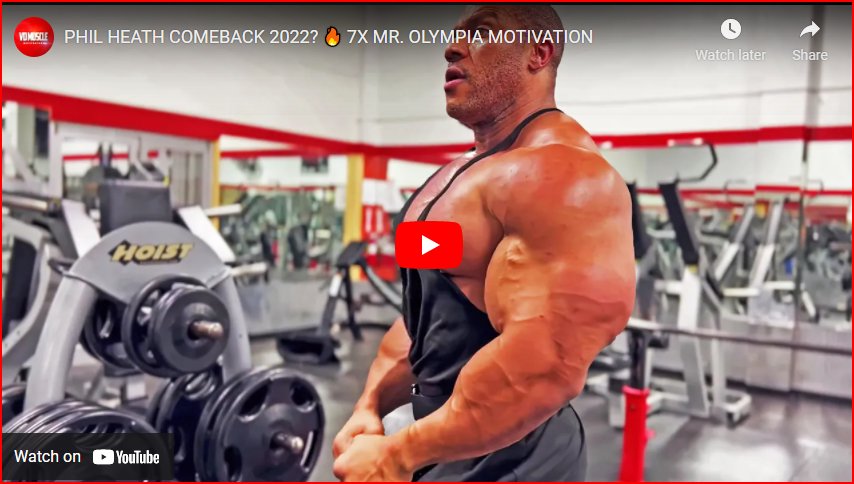 Let me just say that Phil Heath is looking absolutely awesome. He seems to be training with real intensity and loving his time in the gym. Before delving into his physique or his level of training, I think it’s very important to note that he’s having fun. Whenever you talk about a living legend in bodybuilding, I think where they are, mentally, is huge.

A lot of times these guys are burnt out on competing. They’ve done it for so long that returning to the stage is the last thing on their minds. A lot of guys don’t just stop competing, they don’t stop training. They might be bodybuilders at heart, but they’re so over preps and rumors, that they literally change body types to eliminate even suspicions they might secretly be eying a return. Those who still train but are deep in retirement, might still pump iron and keep their size, but they make a point to avoid social media.

Guys who are happily retired don’t post physique updates because doing so feeds into the fans’ and media’s obsession with asking about hypotheticals, where if the stars aligned, they would be back in trunks, posing down for the biggest titles in the sport. This is, especially, the case now, because we’re at a point in time where it seems Big Ramy is invincible. I mean, you all know where I stand with regards to Brandon, and where I stand with regards to 2020 and 2021. I think a case can be made for Curry having retained the title in ‘20 and I most definitely think he won the show in ‘21; however, what I believe and what reality is, is totally different. The reality is, the judges don’t seem to think Brandon, William, or even younger guns like Nick or Hunter can unseat the 2x champ. Phil, on the other hand, totally recovered and rested, maybe could. A very big reason there’s so much interest in The Gift is because people think he could potentially unseat Ramy. And it’s not because people dislike The Egyptian Phenom, rather, it’s because the fans dislike multi-year runs. By Phil’s 2nd or 3rd title, people wanted someone, anyone, to knock him out.

It’s interesting to see Phil, a 7x champ, in the challenger’s spot. After 2020, I feel, he earned a lot of his critics’ respect. He certainly earned mine. He came back from defeat and while he was unable to win his title back from the guy who put the brakes on his run, he still took the contest very seriously. He looked incredible, battled hard with Brandon, and won some poses. Taking 3rd and being a good sport about it in 2020, made for some really good PR opportunities. I think his critics started to look at him in a different way. I think the fact he sat out 2021 also added a dimension to the idea he could come back in 2022, 2023, or maybe even beyond that.

Phil’s 2020 look and placing was key. Taking Top 3, being bested only by Mr. Olympias was further interesting. If you stop to think about it, he managed to beat everyone else, so if he was to get on stage in 2022, his chief competition would be the same as it was in 2020 – Ramy and Brandon. The only question is, has he improved dramatically over the course of the last two years?

I think it’s very noteworthy that Phil has partnered up with a TRT clinic, as opposed to a supplement company, moving forward. From a marketing perspective, I think it’s a lot more believable for a top bodybuilder to promote exogenous synthetic hormones and peptides than, say, protein powders, creatine, and pump agents. Heath is essentially selling two things with a clinic. He’s selling the service and he’s selling the product line. He’s also promoting products that directly assist him in overcoming post-op procedures to correct injuries, working against the aging process, and helping with muscle growth and recovery. There’s far less of a bullshit-factor when it comes to working with this type of sponsor.

If Phil talks about testosterone therapy, for example, he can choose how transparent he wants to be. Right now, I think he’s keeping it pretty vague. For example, he’s clinging to the fact he’s on TRT and using peptides, but he’s not specifying dosages and/or what peptides he’s taking. This disclosure, alone, has many outlets weighing in. In fact, many big names in the industry have raised concerns about just how effective peptides are, as opposed to stronger anabolic/androgenic compounds. The fact Phil is openly citing them as key to his look, may draw a second look to these treatments.

Guys like Dave Palumbo, for example, are openly dismissive insofar as peptides effectiveness for elite level professional bodybuilders. Not only do they fail to subscribe to the science behind them, they don’t understand why anyone would dabble with experimental drugs, when there are tried and true options which have worked for decades. Proponents of peptides have argued they can be less stressful on the body and even healthier. While these arguments could be persuasive ones, they don’t fare favorably for the top 5% of bodybuilders – guys wanting to win the top titles in the world. In reality, there’s nothing super healthy about contest prep, to begin with. Even fully natural preps involve caloric manipulation, varying hydration and sodium levels, and drying out periods. For the enhanced athletes, throw in anabolics, insulin, hgh and diuretics. To mix and match with peptides could prove cumbersome at best – or – chaotic, at worst. There’s so much on the line, that most competitors simply won’t leave anything to chance.

With Phil’s case, it’s got a twist. Are Phil’s updates nothing more than a top guy flirting with the notion for a comeback to promote a clinic or is he coming back? Is he really all that surprised with how his body is responding – or – is his physique the vehicle to promote customer service, patient care, doctor expertise and pharmaceutical grade therapies? Also, are his physique updates just an opportunity to get the word out that he’s part of this clinic?

The choice of words in Phil’s posts is key. Typically an athlete refers to sponsors as “they,” but Phil talks about the clinic as “we.” That’s definitely noteworthy because it automatically means that Phil is sponsored, but could also mean he’s a part-owner – or – the main owner! Fans and potential clients might take the social media posts to mean, if they needed a consult or therapies, that they might get to talk to Phil. They might also take it to mean that Phil might have a hand in their care. They could also potentially take it to mean that they could get therapies much like Phil gets. In reality, Phil nor the clinic have any control over how people react or what they think, but a reaction will be made. That as much, they can rest assured of.

The content Phil is putting out is impressive. He’s in tight shirts and even tank tops. It’s perfectly clear that he’s grown and that the shape of his muscle is very much in line with the best looks he’s brought to the stage. Plus, seeing him happy, and giving it his all in the gym, most definitely is enough to get the nostalgia effect going. That’s the vibe that keeps message boards and Facebook groups buzzing.

Unlike other sports, bodybuilding is a sport that’s driven by memories. Fans still watch Pumping Iron as if it were a new release; they also watch it because they know it, inside and out. We are as much fans of the past, as we are of the present and the future. Guys will spend hours arguing over the 1997 or 2001 Mr. Olympias. They may have read the same points over and over again over the course of 20yrs, but that won’t stop them from having the debate one more time. They’ll reach for the same comparison photos, they’ll create memes, and they might even launch polls. The magazines are no different. How many times can you recycle a story? Your guess is as good as mine. It never gets old – at least not in bodybuilding.

There are countless fans who think Phil at 100% can beat anyone. They never accepted his defeat to Shawn Rhoden, they probably think he got screwed in 2020, and they patiently await his return in 2022 or beyond, where he’ll reclaim this title, tie and beat Haney and Coleman, and go down in history as the GOAT. Some might argue they’ll be waiting a long time, but others might, simply, point to Phil’s recent social media updates and predict he’ll successfully return in nine months to claim what’s his. Either side has a strong case to make, but it could also just be marketing hype. You all know what I’m getting at.

Ironically, Phil may be taking a page from his biggest nemesis from his competition days. Kai Greene has banked on flirting with comebacks. Much like Phil as of late, Kai has always looked the part of a champion who could come back anytime he wanted. He’s large, ripped, always in shape and, seemingly, always ready to throw his hat in the ring. He’s successfully mastered the comeback angle to the point the media still write about him, fans keep asking, and whatever he’s involved with, sells bigs. We’ve seen Kai use this angle to promote podcasts, pump-up Stranger Things, sell ebooks, supplements, personal training and posing classes.

To date, Kai hasn’t so much as done a $10k show, much less an Arnold Classic or Mr. Olympia, but his demand has never waned. If anything, he’s figured out ways to get more people drumming up support for him. There’s even people, now, actively calling for a Kai Greene comeback who weren’t even fans of the sport when he was competing. These are younger fans who are calling for a comeback from a guy they never, even, saw compete. How’s that for pushing the envelope? I’d say Kai Greene has created a perfect blueprint for Phil and Phil is taking the ball and running with it.

Do I think Heath will ever compete again? No. I think that was 2020 and that ship has sailed. Other outlets have floated the possibility he might do the Arnold, or even Athelticon. While there’s a chance of that, I don’t see a guy who won 7 Olympias contenting himself with winning lesser titles. While Phil’s ego is a lot more in check than it once was, he knows what being the greatest bodybuilder in the world feels like. I just don’t think he’d prepare for a title that was less than that. Plus, if he did a show besides the O, he would basically have to come to grips with the fact, that even at 100%, he wouldn’t be good enough to contend for the top title in the world, thus the reason to compete at a lesser stage. I don’t think a paycheck would be worth enough for Phil, psychologically, to do that to himself. But I might be wrong.