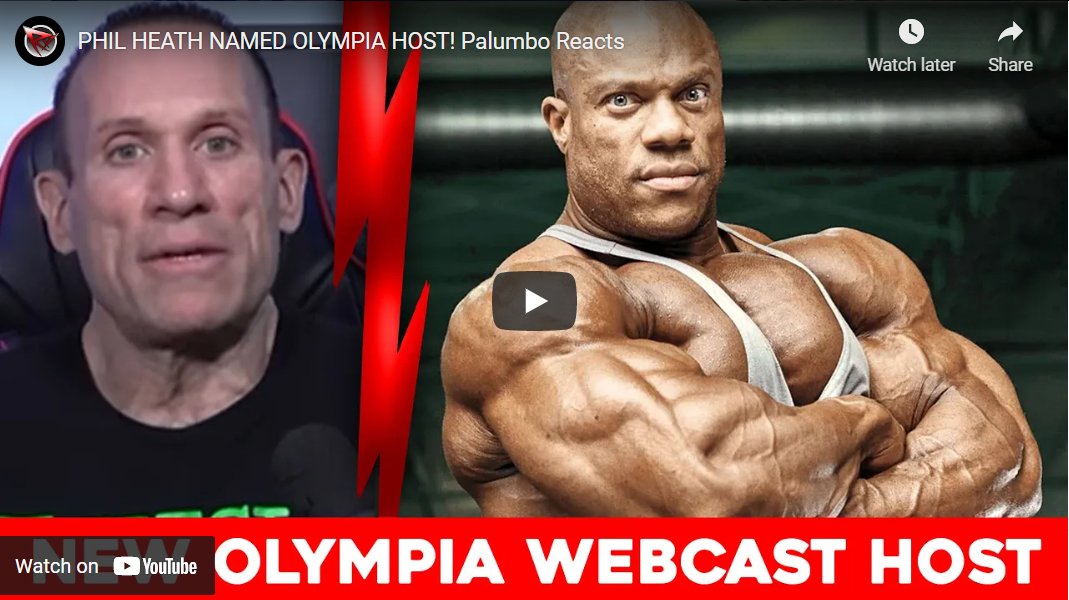 It’s no secret that I’ve been critical of 7x Mr. Olympia Phil Heath over the years. Initially, i was a big fan of his. From when he turned pro to when he won the Iron Man against a shredded Gustavo Badell; however, when he became more and more arrogant, I became less and less of a fan. From his feuds with myself, Luimarco, Shawn Rhoden and others, it was very difficult for me to take him seriously. It became more of an issue when he was blocking media outlets and journalists who questioned his ability to tie the great Lee Haney and Ronnie Coleman. But that’s all in the past, right? He’s a changed man and I suspect these changes began to take shape after he lost the Olympia in 2018. Much like Ronnie in ‘06, I think Heath had to come to grips with defeat. He was unstoppable for years and no one ever thought he wouldn’t go for 8, 9, or beyond. There were years when he didn’t look so good but the judges just kept rewarding him. By 2018, I thought the only thing that could stop Phil – was Phil retiring. He’d beaten Kai several times, he beat BIg Ramy, he beat Culter. Who else was left? The fact of the matter is Phil was done in 2018, but then he came back in 2020.

The 2020 comeback is where the world got to see the new Phil. He had a bigger picture mindset. He didn’t have to win in order to have fun. He worked hard for the contest and while he took some minor digs at Brandon, he was a very good sport for the most part. When he got on stage the fans gave him a lot of love and he pushed everyone – including Brandon and Ramy. Ramy looked to be the winner but Heath was in such great shape that many thought he could potentially take his title back. When he got third he was very gratuitous and supportive of his competition. There weren’t any tantrums, he didn’t trash the guys after the contest like he kind of did after 2018. The fact is, he said he had changed and he really did. I, myself, cheered for him and even though I wasn’t rooting for him to win, he regained my respect. That’s really big of him. He didn’t have to do that, but I think he saw what would happen to his legacy if he didn’t.

While Phil was able to successfully reinvent himself, he tried his hand at various different things, only to come back to bodybuilding. Yes he’s college-educated and yes he has close ties to The Rock, but his future doesn’t lie in speaking to mortgage broker conventions or motivational speaking. I suspect his future will be in bodybuilding. Again, could he do other things? Sure. But why spend years creating a completely new fanbase in areas outside of bodybuilding? He’s a 7x Mr. Olympia it only makes sense that he works in the sport he helped make famous. He’s been a promoter, a guest poser, and worked for various companies. He could always start his own supplement line, buy some gyms, or do things like Dexter Jackson and train athletes. There’s no shortage of things he could do to make a very good living. There are career paths, like journalism, that would require some effort and some training before going all in. The ideal way to get into media, whether it’s MCing, commentating, or reporting, would be to take some time, work with the greats, and develop his own style. None of that was the case, however. Instead, Phil was given platforms and has been basically winging it.

Just a week ago I saw Phil and Chris Bumstead do an Instagram LIVE for the Olympia Weekend account. To say the show was boring would be the understatement of the century. Not only did both hosts ignore 8,000 viewers, but they tanked. By the end of the LIVE they had lost nearly half their audience. That’s right – 4,000 viewers simply logged off. And why did they leave? They left because Phil and Chris spent the whole episode talking about how great they were, complimenting each other, and totally ignoring the fans. There were some really good comments posted – all ignored. There were some great questions asked – all ignored. And while both of these decorated champions could have sold the event and the PPV intensely, they only mentioned the feature a couple of times. It was a huge missed opportunity and it showed me that while these guys are very accomplished champions, they don’t know the first thing about being journalists.

To simply give a person a mic or a platform and bill them as seasoned commentators, writers, or content creators is an insult to people who actually make a living in media. I wish Phil would have started out small, maybe done some MCing and/or contest commentating first. To give him the Olympia PPV hosting spot is a huge feather in his cap but also a huge risk for the contest.

I wish Phil the best and want to see him do well. I just hope it’s not as boring as Instagram LIVE was from last week. Hopefully, he’ll be joined by some other superstars and he’ll talk about the current Olympia competitors. It would be pretty lame if the show he hosted was all about himself and downplaying the achievements of the current crop. Only time will tell. I can’t imagine he’s going into this blind, but it wouldn’t surprise me either.

How do you think Phil will do? Do you plan on getting the Olympia Pay Per View? I look forward to reading your feedback in the comments. This Olympia Weekend will be one for the record books – that’s for sure. As always, thanks for reading Iron Magazine.