Not Natty? Why Lie? 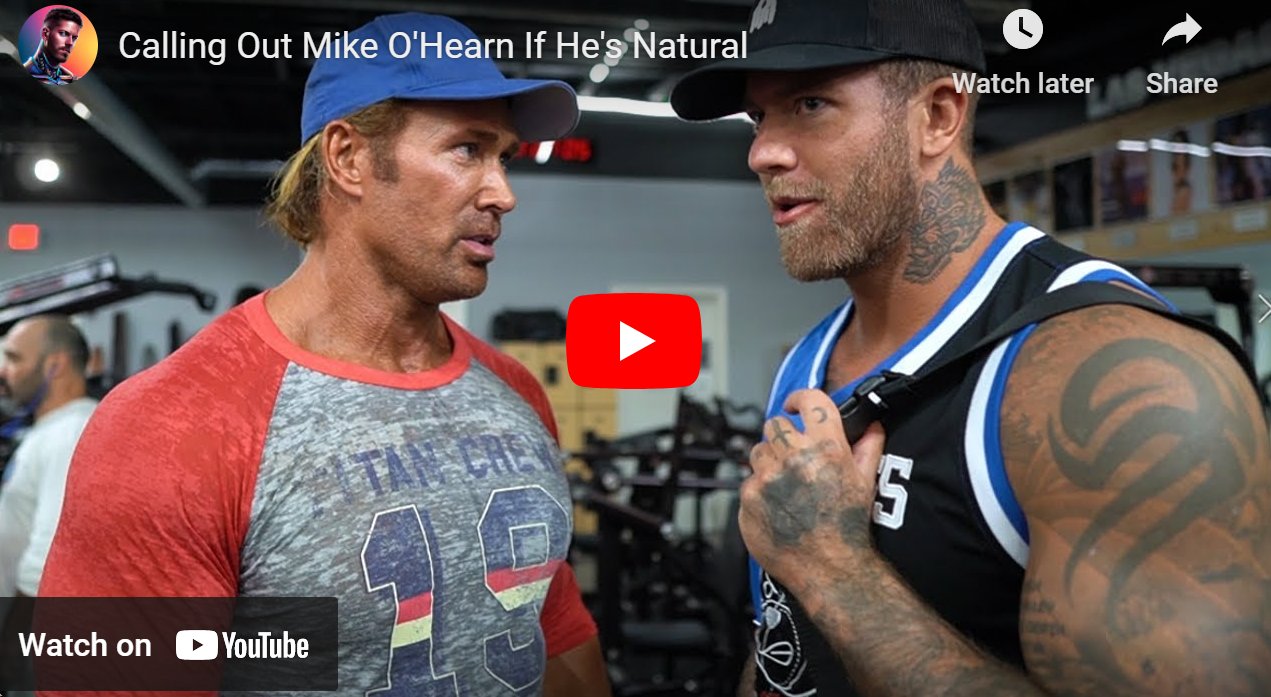 Countless Youtubers from More Plates More Dates to Kenny KO are hard at work on Natty Or Not videos and the fans just can’t get enough. Canadian bodybuilding legend Greg Doucette has also gained considerable media fanfare by including much of this on his commentaries. He also has stand-alone videos on this topic, usually targeting major influencers.

While the topic of PED use should be a personal one there’s no shortage of nosy people who feel entitled to know everyone’s business. They want to know what their favorite competitor is taking and how much. This may be because many top athletes are sponsored by supplement companies and it’s possible that fans think if they take what their idols take that they may be able to duplicate those results.

These would be the innocent/gullible fans who believe that whey options and PreWorkout powders actually help create the physiques they love. Other fans know better and get a kick out of athletes being on the spot and having to tell all. Some fans actually like hearing the compound names and dosages; it’s like tech talk.

Most athletes are using PED’s. Whether it’s Bikini, MPD, or Bodybuilding, everyone is on something. This isn’t the case with natural federations but when it comes to untested ones it’s pretty safe to say that athletes will do whatever it takes to win. There isn’t much money to win but it’s all about respect.

Elite level athletes know there’s many ways to hustle and no one who knows how to make moves will ever starve. The reason competitors push themselves as hard as they do is because they want the respect. They want recognition and validation – especially from their doubters. They want the cutting edge photos and they want heads to turn at contests and big expos. They want to go grocery shopping or out to dinner and they want to shock the mainstream public. They want to make jaws drop and they want people to notice. Physique based athletes live for attention, but they don’t want attention as to what they take.

Much has changed since 1990. When steroids became controlled substances no one wanted to be associated with them. There was even a tested Olympia and the WBF tested as well its final year. During the 90’s and early 2000’s it was incredibly bad for business to talk about gear. Even in the late 80’s Lee Haney talked the subject down.

The crazy prohormone bans of the 2000’s didn’t help make PED talk any less taboo. In fact, many supplement companies discouraged their sponsored athletes and ambassadors from admitting to use them. Not only was this point of view promoted because of legalities but also because of supplement companies own interests. If athletes were known gear users then how much of their gains would the fans believe were attributable to the legal, food-based products they were being paid to promote?

As the 2000’s came to a close more influencers started to emerge. When the late Bostin Loyd took to YouTube no one had ever seen anyone that open with gear use. He accused pro’s of taking boatloads of drugs, he himself admitted to taking unreal amounts of steroids, and the fans just couldn’t get enough. If there’s one thing Bodybuilding fans can never get enough of it’s brutal honesty. And seeing Bostin pin himself on camera just sent the physique audience into a frenzy. Although there were guys like Dan Duchaine before Loyd, Bostin was probably the single most controversial figure leading into the social media age who turned the fans’ penchant for answers on. He showed them a glimpse of a world many suspected of, but few ever saw.

Sometimes the question of natty or not doesn’t even warrant an answer. In some cases it’s so obvious that the question isn’t if they’re on something, but how much are they taking. If a woman sounds like a male truck driver then something’s up. If a guy who’s in his 50’s is over 200lbs and has single digit body fat percentages with 20+” arms that person is probably on gear.

There are exceptions in all things – I’m certainly not a fan of absolutes; however, my feet are well planted in reality. While there may be one or two genetic freaks per generation, that too, has its limits.

A genetic freak may be able to be a little better, recover a little faster, and maybe hold onto a bit more size without fat, but it’s not going to allow for an extra 10, 15, or 20lbs of lean muscle tissue. To suggest otherwise is absurd – regardless if the athlete admits to use or not. There are things that are just physiologically impossible. Most people realize this, but they still want to hear it from the horse’s mouth.

I believe certain fans may get a kick out of prying into their stars’ lives. It’s no different with rockstars, actors, or elected officials. It’s a cat and mouse game that’s never going to end.

There’s an undeniable demand and certain YouTubers are answering the call by totally switching gears and putting prime emphasis on ambush interviews looking for sensational sound bites and getting top talent looking like deer in headlights. Like I said, I don’t think it’s about knowledge, rather, I think it comes down to a desire for real tv, awkwardness, and pushing the envelope. It’s about crossing lines and pushing peoples’ buttons.

If an athlete uses and doesn’t want to talk about it, they can say just that. They can also use humor to deflect; however, when fake natties like Liver King market themselves as being 100% natural, then it’s just a question of time until they’re exposed. Similarly are those who have obvious signs of use but choose to deny use on the fly. At that point public opinion – all on its own – will crucify them in the comments and reposts.

Unfortunately social media has created a voracious, unquenchable appetite for this type of content. The PED questions won’t stop. How you choose to address them will determine what comes next.

You can admit, deflect, or deny. Admitting and deflecting seem to be the best choices. Denying is lying and it seems to be the worst choice, but it also depends on what you’ve got going on and how much you’re willing to risk to keep the secret.

What say you? What’s the best approach and why? I look forward to reading your feedback in the comments.

Newer Post
Kali Muscle Biggest Secret Exposed!
Older Post
What is Stomach Stretching and What Benefits Can You Experience?