How Should Fans Approach Bodybuilders? 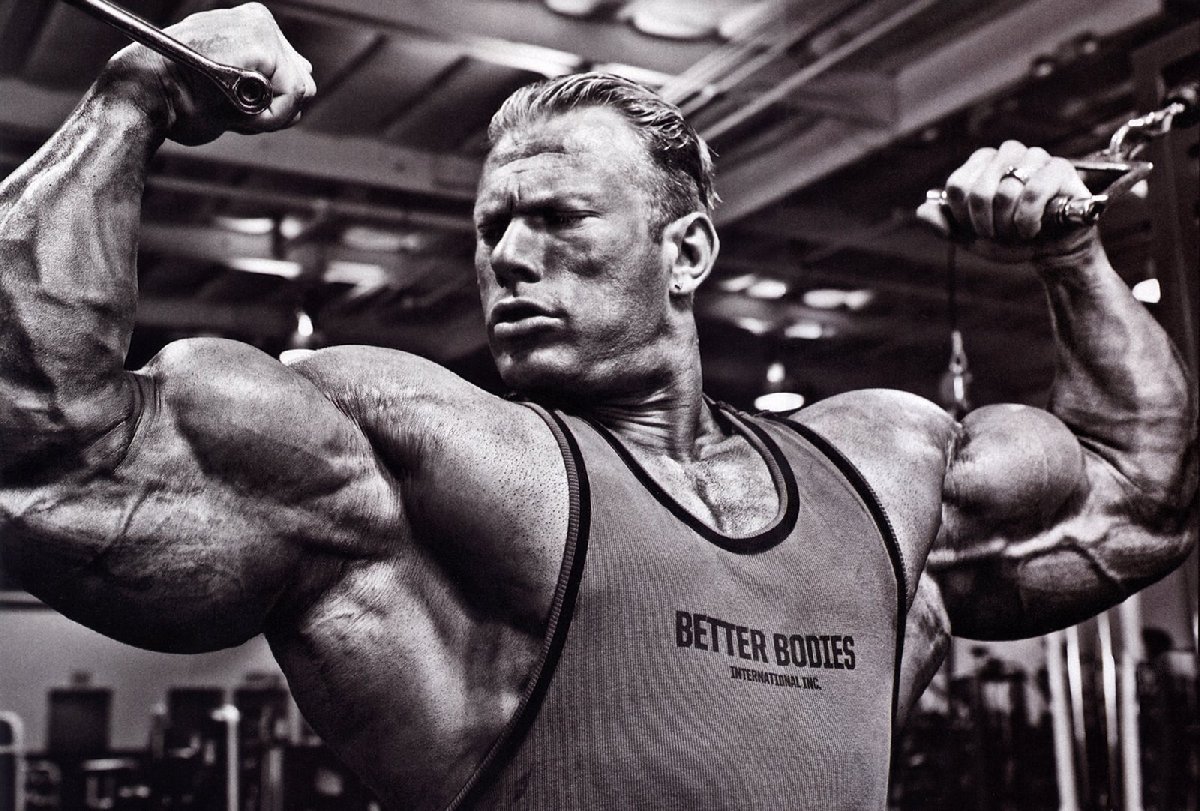 Bodybuilding fans can be very touchy feely and have zero concept of personal space. They don’t care about the pandemic and they don’t care if they come off as looking weird AF. For some it’s all about being as close to the bodybuilders as possible. Some want to be so close they can smell what they ate for lunch. Very quickly each fan interaction could be its own psychology case study. And although we have some pretty big fitness celebs the only one I can think of that actually has security would be Arnold. I’ve seen some top guys walk with company reps or a small makeshift entourage but that’s either to get from Point A to Point B in a crowded expo or maybe something cheesy for the cameras.

Over the years some brands have been promoted as gangs and in that case it might be fitting to have what resembles an army. They might not be able to fight worth a shit but it’s all about appearances. Nonetheless we’re not an industry where our most recognizable have any sort of bodyguard detachments. The most aggressive fans might hear is a booth worker threatening to send them to the back of the line. Also most of the fans are ok – maybe a little weird – but generally ok. If muscular women can deal with the schmoes then a 260lb shredded bodybuilder might be a little shy about asking the bikini girls working the booth to take care of business. Ultimately what happens is weirdo fans with the clammy cold, sweaty hands will shake any number of fitness celebs’ hands and ask them how much protein they eat and how they got their biceps so big.

Most of the top stars have heard these questions and have rehearsed answers down to a science. They can’t say they’re walking pin cushions and/or have nearly doubled over in agony from cramps backstage. Instead they say it’s all in how you boil your sweet potatoes and the joys of eating sugar-free syrups and sauces that either taste like crap or make you want to crap. The truth is, it’s pain and agony with a big, bright smile.

Most of the schmoes don’t want to hear about the actual work. They may not even care about their favorite stars’ own trials and tribulations. Remember I’ve been doing this work for well over a decade. I have thousands of interviews to my name and I can tell you firsthand how many of these folks think. I know because they tell me and I know because I read their comments. I have interviewed cancer survivors. People that for all intents and purposes should be dead. It’s like full medical teams have given them six months to live and here they are, promoting a bodybuilding show and looking like a million bucks, eight years later. That kind of story inspires people. It motivates them to train. But if I have seen many comments from people who would rather have seen that survivor pose than speak. They want to see the crazy physique they built, they don’t care about the sleepless nights or the powering through what seemed to be endless sessions of chemo and radiation. These are the type of fans that truly objectify physique-based athletes. They don’t see them as people much less do they care about what they’ve been through. If that sounds selfish and deranged then so be it. It’s who they are. And their money is as good as that of the real fans who love the sport and care about the athletes. Sadly, it takes all sorts and we’re in an industry where we can’t turn too many away. We’re a niche sport by circumstance, certainly not by choice!

The fact of the matter is you just don’t know who’s who at large expos. I remember when we worked the Iron Mag Labs booth at the 2018 Arnold Classic. Folks would come by with huge garbage bags looking for free supps and clothing. They didn’t know a thing about who was competing or that bodybuilding was even a sport. They were just there for the freebies. Others were there for other things. At the time we had some major talent linked with us. We had legendary fitness icon Gregg Valentino and The King of Buffalo BIG FRANK! Both of these guys had a huge following and their fans ran the gamut.

There were folks there who were impressed by their physiques and others who wanted some info on how to get jacked. You could always pick out the weirdos though. Whenever a heavily muscular athlete is conversing to a fan there are those that look at the person’s face and there are those who are fixated on the muscle. Whether they’re staring at biceps, pecs, or whatever, they’re watching the muscle and arguably listening to what the star is saying. While some of these people get a sexual thrill out of it others are totally asexual. It’s a thrill but not necessarily a sexual one. This is why there are muscle sites in the industry that are just that. There’s no sexuality to speak of, rather, they’re all about muscle. There are people who get something – I don’t know what – from seeing muscle whether it’s cold or flexed. They will pay top dollar for it and if they’re in close proximity to someone they find impressive, they really can’t help themselves. This article really isn’t for them. I don’t like to judge but when it comes to the weirdos – that ship has long sailed. There’s no reasoning with them. They’re in it for the thrill of the hunt.

In a weird way, the really successful champions and influencers have found some common ground with their bizarre fans. In many cases they’re able to set limits and boundaries rather efficiently. They seldom if ever have to say anything but they make their point. Others simply have no patience for these characters and word gets out fast. There’s guys who simply won’t put up with any nonsense and thus the sketchy fans know to stay away. That said, so long as bodybuilding remains a niche sport, top talent will avoid turning anyone away. Sometimes it’s the oddballs who buy the most and who are the most loyal. Sometimes in order to be super famous you have to be strategic in choosing your battles.

That said there’s a huge number of great fans and this article is really intended for them. They’re fans of the sport and they respect the commitment the athletes make. That being said, many of these folks also could use a lesson on etiquette and knowing each person’s boundaries. If a fan asks a bodybuilder to take a photo and they get the green light that does not mean grab at the athlete. You get permission for a photo – not to put your arms around the celebrity! You also didn’t get permission to take multiple shots in order to pick your favorite. If someone else is going to take the photo be mindful of the line and the athlete’s time. Again, this isn’t a photoshoot and you were given the green light for one photo. Further to that, fans who ask for a pic but then use the opportunity to get autographs and ask a million questions should also be discouraged from doing so. Time is money and often when a bodybuilder green lights a photo they’re doing it for free. Therefore if you’ve been given the privilege to get a shot don’t then try to drag out that goodwill by hogging said star’s time all for yourself. This goes for conversations too.

If the athlete wants to talk to a fan longer, let him/her initiate. Many times they will stop the fan from leaving and/or they might ask the fan into the booth. More often than not, however, it’s fans who won’t let the star leave. They’ll employ passive but effective ways at either trapping the star or making his/her exit awkward. They do this while a line of people behind them wait patiently. This type of behavior isn’t only inconsiderate for the athlete but it’s inconsiderate for all the fans waiting patiently in line. What’s more is that just because an athlete happens to be at a booth does not mean they’re supposed to be there all day.

In 2022 most athletes who do bodybuilding for a living require 3, 4, or 5 sponsors. Gone are the days when a supplement contract would be enough to pay all the bills. There was a time when if you were good enough you could stack a lucrative supplement contract with a magazine one and then just coast along. The magazines might use you 6-9 months for 1-2 day photoshoots and the rest of the time you had your column ghost-written and you got a deposit every month for basically doing nothing. Today athletes have to sign with multiple companies in order to make a living. So if a bodybuilder happens to be signing stuff at one booth his/her time there might only be 1-2 hrs. At that point he/she needs to get to another sponsor’s booth and be there for another 1-2hr shift. Again, this is real work, and each sponsor wants to get those lines moving. Happy fans buy more stuff. This is how the companies earn and it’s how the athlete does too. Inconsiderate fans who throw a monkey wrench into that process are not only doing their fellow fans a massive disservice but they’re stopping people from making a living.

In addition to grabbing at the stars and playing with their time, there are also things that should never be said. Social media has effectively narrowed the gap between fan and celebrity but it’s also allowed for some to take liberties they have no business taking. Asking a total stranger about PED use for example is really weird. Just because you watch all their Day In The Life videos and just because you watch all the interviews they’ve done doesn’t mean you know these superstars. Even if you exchanged a few DM’s or hired them to online coach you, that still does not mean you’re friends on a level where you could approach them in a crowded expo and ask that sort of question. That’s akin to asking a married couple how many times they have sex. It’s none of your business! But sadly, social media has given certain people the shamelessness to ask things that are totally inappropriate.

Further to that, fans today have a surreal sense of entitlement. Even if you hire an athlete as a coach, even if you buy their apparel and buy supplements from the companies that sponsor them, you’re getting what you pay for. You don’t get to behave any kind of way or ask any sort of awkward question. Unfortunately there are fans who think the athletes owe them something and that is why they take the liberties they take. They are dead wrong!

I literally could go on and on and maybe I’ll write more on this topic at a later date. As I see it, the most pressing instance of fans overstepping boundaries is at expos and public appearances. That’s why I chose the title I did and why I focused on one specific area of fan/star interaction. What’s your take on how certain fans interact with athletes? Do you think they know what they’re doing is wrong – or – do you think they just don’t give a f*ck?