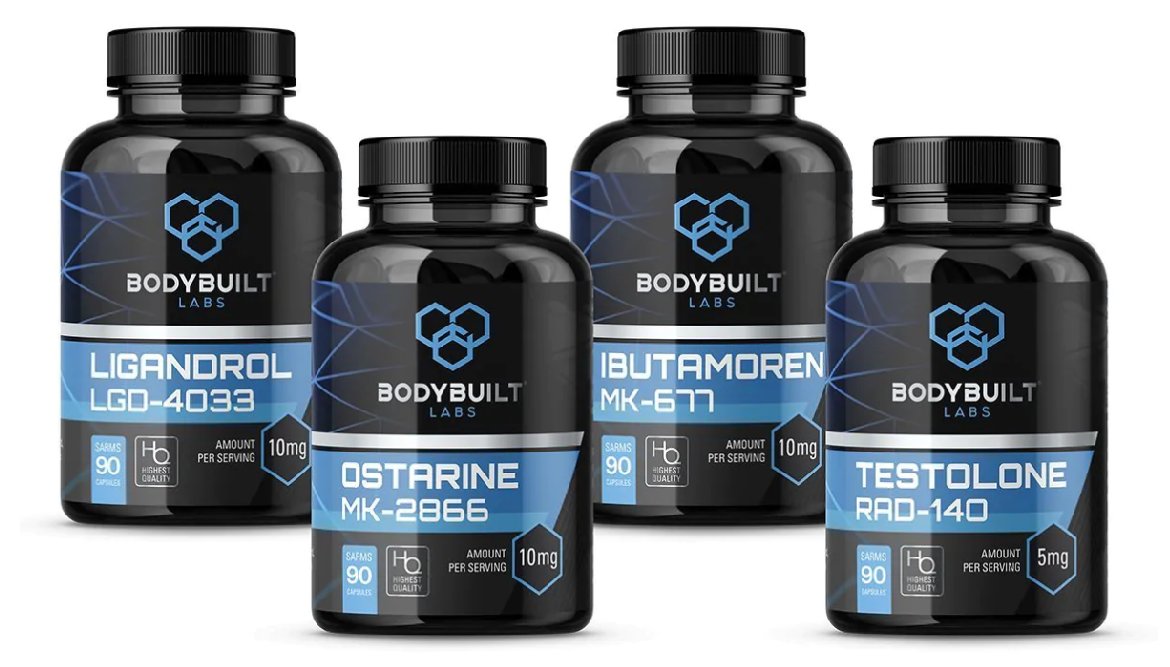 Is there someone at Facebook or Instagram that’s physically approving all these SARM ads? I’m really curious because the ads are everywhere and yes I already wrote an article about this so I’m just getting this out of the way. The article I wrote was from maybe a month or two ago and since then I’ve only seen more ads pop up. The companies in question aren’t being low key at all! And that’s what makes this article different from the last and why I know you’ll be glued to every word.

The ads are so much more bold! There’s no more mention of rats, lab coats, or the silly disclaimers of “not for human consumption.” Vials are out! That’s so last decade, right?! Now the SARM companies are putting out capsules in various different colors. Branding has certainly not missed a beat. The bottles have extravagant labels with cool fonts and colors.

Again why is any of this necessary for “research purposes” is beyond me. The fact is the companies in question are racing to market because they know that there’s a time frame during which they will possibly get away with this. It’s a money-grab at this point and it takes venture capitalism to a whole new level. Gone are the days when they might get an FDA Warning Letter. Things are way past that point. It’s abundantly clear that SARM’s are not dietary supplements and should not be described as such. This might explain why the disclaimers are no longer as prevalent as once upon a time. I think that SARM’s companies have come to the realization that that disclaimer offers them little to no protection.

The government isn’t stupid they just had more pressing matters to deal with than chasing after lunkheads selling research chemicals out of their homes or cars. With the pandemic largely controlled and life returning to normal we’re seeing the FDA take more proactive measures. These proactive measures include raids like that seen on Rats Army. What’s interesting though is how much people love money. Many of these companies are based in America. They openly distribute to supplement stores and gyms. They actively recruit ambassadors and advertise wherever they can – Facebook and IG are cases in point. If they could advertise at bodybuilding shows or media outlets then I’m sure they’d do that too. This new age of SARM makers directly contrasts from their predecessors. Remember, many of the biggest companies of yesteryear would only make their presence known on hardcore bodybuilding forums. Much like the old Mustache Petes of the mob – they were low key, in the shadows, not bringing attention to themselves. The SARM makers of 2022 are more like the John Gotti’s and Joey Merlino’s of the mob world. They want everyone to know they’re rich and they laugh all the way to the bank. In a very real way, they’re thumbing their noses at the government.

I think it’s safe to say that SARM producers are being watched. And those that aren’t, are basically asking for it. The same Facebook and Instagram ads that inspired my last article, are going to be one of the strongest pieces of evidence in cases probably being put together as we speak. Imagine that. Imagine being indicted and convicted based on your own advertisements!

Maybe in the grand scheme of things these companies think they’ll come out on top. Maybe they figure that if they plead out, pay restitution, and even give up a ton with forfeitures that they’ll still come out on top. I’ll tell ya folks – that’s not only a hell of a gamble but a horrible way to live. Imagine knowing what you’re doing is illegal, imagine playing with peoples’ health and well-being, and imagine always wondering if that knock on the door is a swarm of agents coming to arrest you. Is money really worth it? To some, it clearly is.

And I know what some of you are going to say. I read your emails, I see your DM’s. Trust me, just because I don’t always respond doesn’t mean I don’t look at the readers’ feedback.

Many of you will tell me that SARM’s aren’t dangerous. Some of you might still believe that they’re safer alternatives to gear and there are even still a few of you that think taking SARMs means you’re still natty. No, you’re not, but I digress. And whether SARM’s are safe or not is another topic of discussion. What you’re actually getting from SARM makers is a totally distinct conversation. Whoever sells and promotes SARM’s is essentially doing so on the black market. There’s nothing gray about it. You have the same means of recourse with a SARM’s maker in 2022 as you do with a corner drug dealer.

And while some of these companies might also hang their hats on purity tests – there’s no way to fact-check anything. No legitimate laboratory is going to put its stamp of approval on unapproved chemicals being marketed as dietary supplements. They’re not going to risk losing it all for that – and – they’re ethically going to object to testing these chemicals as well. Therefore, many (if not all) of the lab tests and purity results could be totally doctored. And they probably are! Don’t be a sucker!

Again, I don’t know how Facebook and Instagram are allowing these ads. I don’t know how the ads pass their muster, but wouldn’t it be something if the Feds went after them for it? And please folks, please don’t tell me “Facebook is too big.” Give me a break! The fact is I would venture to say – and It wouldn’t be that much of a venture – that most of these companies are generating the majority of their sales through social media ads.

This would explain why they’re advertising as much as they are. It’s one thing to advertise to have expenses and it’s another to pump boatloads of cash in short amounts of time. The only explanation for the acceleration in the number and frequency of Instagram ads is that the companies are making a killing. And I don’t know that the social media platforms are exempt from prosecution.

I can honestly say that I have never seen the sheer number of SARM ads like I have today. It’s like they’re everywhere and there’s about 6-10 companies that are behind most of the ads. What’s even crazier is that new companies could be forming! And raids are having very little impact. I wouldn’t even be surprised if the Rats Army tries to restart operations. The money is [probably] that good.

I don’t know if lawmakers will step in or if the status quo will become the new normal. Whether these chemicals work or not isn’t the point of this article. Why social media outlets are allowing these ads to go up is insane! What’s crazy to me is the boldness of the ads, the claims being made, and the general disregard for consequences that have inspired this article for Iron Magazine. Even some supplement stores and gyms have taken the plunge. They no longer hide SARM’s or have to go to the back to get them. Instead SARM’s are on the counter! They’re placed right beside the energy drinks and protein powders!!

I get that money makes the world go round, but it’s getting really crazy. For SARM’s sake! What’s next?

Newer Post
High-Intensity Interval Training (HIIT) & Cortisol Creep: Is HIIT Bad for You?
Older Post
Is Mushroom Coffee Growing on You? Here’s Why You Need It