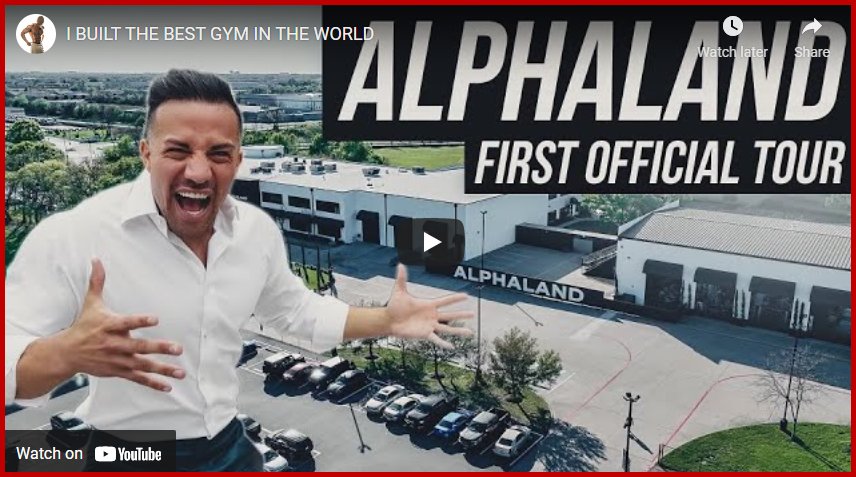 For over two years now, Christian Guzman has poured his life, soul, and bank account into his Alphaland project. This could be the largest fitness headquarters on the planet with everything from multiple gyms, a retail location, a restaurant, a hotel, and more. If you’re a meathead or fitness enthusiast, Alphaland seems like the promised land.

With all of that being said, did Christian Guzman bite off more than he can chew? Well, after launching this year, the numbers don’t lie. Let’s dive deeper into everything Alphaland-related and understand if this business venture is on an upward trajectory or if it’s financially burning to the ground by hemorrhaging money.

Alphaland is ON FIRE

Being an entrepreneur, I understand the ups and downs, both mentally and financially, that starting a business can have on someone. There’s the element of the unknown when it comes to starting a new business, and you never really know how things will pan out until you’re deep in the trenches and feeling the effects on a daily basis.

Creating Alphaland has taken several years, a lot of money, and an amount of stress that could wipe out an entire planet (not to mention the build-out for everything was being done at the height of the pandemic, which put a hold on many of the projects and pushed timelines back).

The turnout at the grand opening was huge. In fact, huge may not even be the right word for it. Maybe massive? I don’t know, insert a word that is bigger than massive, and that’s what it was. People from all over came to Texas to see what Christian Guzman created.

While Christian documented much of what went on behind the scenes on his YouTube channel, one can only imagine what was going through his head at all times when he witnessed one setback after the other prior to opening. But the showing at the grand opening seemed to have set the tone for what Alphaland was set out to accomplish in the health and fitness arena.

In a recent YouTube video, Christian Guzman laid out the financials from January through April 2022. He categorized everything, showed how much each category made, and then projected out the rest of the year.

According to what he showed everyone, Alphaland is on track to do around $10.5M in its first year — nearly 10x what Alphalete Gym was doing. That figure is nothing to shrug your shoulders over, and quite frankly, Christian should be incredibly proud of what he’s built. What many may not realize is that two of the biggest segments of his business are the retail store as well as the day passes (for now at least). As mentioned earlier, many people come from all over the globe to visit Alphaland, and they charge $25 for a day pass.

People have the ability to travel to Alphaland, buy a day pass, load up on merchandise, get in a workout, grab some food on-site, and then rent a room at their very own hotel on the compound. Not to mention, various athletes, influencers, and public/online figures show up to train at Alphaland and give fans an opportunity to meet some of the people they idolize.

I’m not sure how much time people actually get to see Christian himself, as I can only imagine how hectic his schedule is, but visiting Alphaland itself is well worth the cost of entry.

Speaking of the cost of entry, I’m not sure how much money Christian put into building Alphaland, nor how long it will take to pay it off, but I think what he’s created is nothing short of amazing.

How Will the Business Play Out Over Time?

In his video, Christian broke out a few more years down the line, and I feel that he was very conservative with his numbers. Some of which was only an increase of $1M year-over-year.

If Christian is on track to do $10.5M in his first year, I can see that number doubling as the business and brand continues to gain attention and build its overall brand presence.

Alphaland is now a major attraction for those in the fitness community. For those into everything fitness and bodybuilding related, I don’t see why anyone who visits Texas wouldn’t make sure (no matter how far out of the way it is) to visit Alphaland.

I don’t have any current plans to head to Texas, but you can be certain that when I do, I’m going to visit Alphaland and hopefully get the opportunity to sit down with Christian for a little and chop it up.

The journey of Alphaland will outlive Christian Guzman, and I think that’s the coolest part of this. So many business owners make the journey about the now versus the future. Even when Christian is long gone from this Earth (as morbid as that sounds), his legacy will remain not only through his YouTube videos where he helps people online but also through Alphaland.

Should Christian ever have kids, how cool would it be to pass Alphaland down to his kids and keep the legacy of his family intact without a third-party coming in to purchase and own the brand? I tip my hat to what Christian Guzman has done with Alphaland and think what he’s done should motivate others to go out and build something special around their passion. It’s not every day that you see someone as young as Christian winning at such a high level. Congrats, young man!

Newer Post
How Should Fans Approach Bodybuilders?
Older Post
The Benefits of Kombucha Tea and Why You Should Drink It