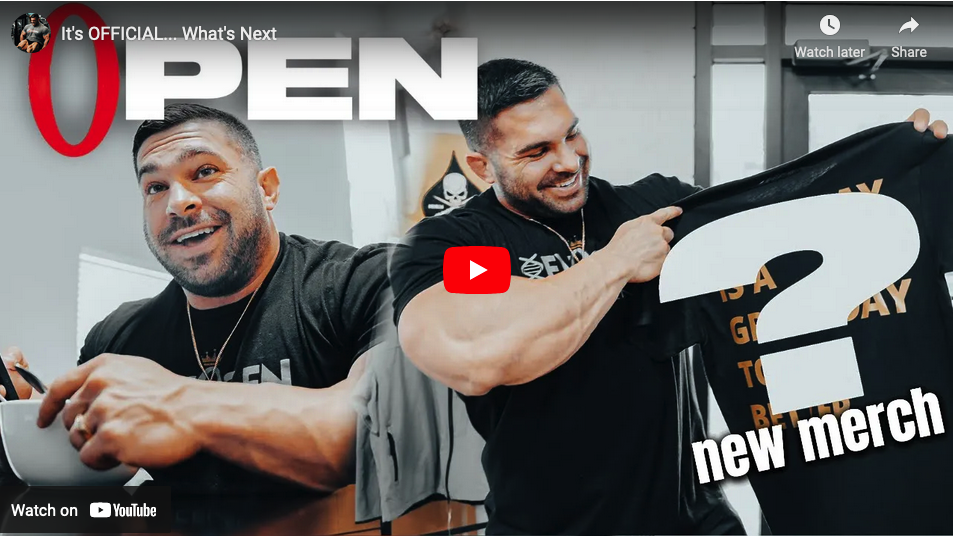 Derek Lunsford got the Special Invite to the Mr. Olympia. Apparently there’s an application for it and he submitted his application and he was picked. The 212 Mr. Olympia then accepted the invite he applied for. It seems like he must have had a pretty good inkling that he was going to get the nod because not only didn’t Lunsford try to qualify by doing an open show, he just ate and trained. He never even picked a contest to prep for. If I didn’t know any better I’d say that amounted to the gamble of the century.

Here you have the 212 Olympia champion, eating and training and probably hitting the creatine hard and he doesn’t have the faintest idea if the stars are going to align and he’s going to get to cut to the front of the line and compete among the best bodybuilders in the world. If the invite didn’t come, imagine all the money that would have literally gone down the drain?

I’m just glad things worked out for Lunsford. That said, I don’t know what kind of a narrative this creates in terms of the future. Let’s say Derek took a spot in the Top 6 and thus automatically qualified for next year’s O. That’d be great for him, but what about the guys who earned the right to be on the stage. I can tell you one guy who knows the feeling all to well and that would be 2019 Mr. Olympia Brandon Curry. Not only did he lose the Sandow in 2020, but he lost it to a guy who didn’t earn the right to have a spot on that stage. Imagine the deja vu moment if Ramy lost the title to a guy who didn’t qualify, but worst yet, didn’t even try to qualify. In 2020 The Egyptian Phenom took 3rd at the Arnold Classic and was in the process of qualifying by doing another show. The invite gave him the chance to prepare for the O, but Derek literally guest posed at the President’s show and the rest, is as they say, history.

But who wasn’t at that show? Who was supposed to be there and told no one he wouldn’t be there? Well that would be 2x Mr. Olympia Big Ramy. Sure, he tried to make nice some 10 days later with a bs apology video but he was unable to cite any extenuating circumstances that led to him skipping the contest. Pittsburgh is the most important show of the calendar in terms of being strategic. Pittsburgh is the power hub of the sport of bodybuilding and absolutely everyone knows it. The greats from all eras come out. You’ve got guys from the 60’s, 70’s, and today simply going to socialize. On top of that you have the very best in the world trekking to the city with over 400 bridges because they want to show respect to the president. Jim Manion is the modern day father of bodybuilding. He’s taken up from where Joe Weider left but without the magazine empire. His life’s mission has been to grow the sport and take it to the big leagues.

When a guy who makes half a million dollars to work for a weekend can’t make it to the President’s contest and lets the whole fitness world speculate for ten as to why, that’s not a detail that will go unnoticed. During the period of uncertainty in question many people had theories ranging from Ramy retiring to Ramy switching federations to Ramy directly snubbing the powers that be for whatever reason. And when even Dennis James – the guy’s coach – is clueless as to what’s happening, that’s a problem. Also let’s not forget Ramy got dropped by Enhanced Labs for essentially failing to meet his obligations as a sponsored athlete. He’s a nice guy but he’s proven to be a poor ambassador for the sport, snubbed the President, and lost the support of a major backer in purportedly one of the largest contracts of the modern era. Some say Ramy was being paid over a million dollars a year. His international appearances have been far less than Coleman, Cutler, and Heath. Even when compared to Curry, who held the title for just one year, Ramy’s inactivity has curtailed even the best efforts of those promoting the Olympia Weekend.

Derek on the other hand is American, he speaks fluent English, and he can run circles around Ramy in terms of promoting the sport. Ramy’s coach Chad Nicholls has a good amount of juice (no not literally) and Dennis James is a pretty big-name coach as well, even though he’s not technically not Ramy’s coach. James is more like a trainer but he’s also not in the zip code of a Charles Glass. He’s basically a very well-placed friend, not to call him a caddie. DJ has some undeniable media credentials and his ties to the Olympia are strong. That’s pretty much who’s in Ramy’s corner.

That said Hany Ramrod is a major mover and shaker in terms of being a guru, supplement company owner, and being super connected. Chad has considerably less sway than Hany today and that’s no disrespect to him. Back in the Coleman era Nicholls was a major shot caller but today I’d argue that his pull is far less.

So why are we talking about pull and coaches and influencers in an article about a guy who got a special handout without even trying. Well that’s partly why we’re talking about someone who didn’t do a damn thing and will be on a stage where he could potentially win it all. That’s not to suggest there’s anything nefarious afoot but in a sport as small as ours – and it is small – influence does go a long way. With Hany in his corner Derek won the 212 title and now has a very solid shot of winning the Open Olympia. Let me put it this way, if Derek brought the quality of physique that Brandon did in 2021 and Ramy looked as he did then, come December 2022, Lunsford wins it all. Again, I’m not saying anything beyond that. If you choose to interpret what I’m saying according to your own instincts that’s more than fine. Afterall, this article isn’t news – it’s Op Ed commentary. I raise points, lend some insights, but ultimately you decide what your outlook is.

I can tell you that the competitors don’t respect Derek’s invite. And it’s not because it’s Derek. The fact is only Ramy, Brandon, and the rest of last year’s Top 6 are up there automatically. Everyone else (save for Derek) had to earn their spot. Anyone who’s up there had to have competed. The lucky ones won a contest early. Others who are accumulating points may have to compete right up to December.

I will tell you this. It’s my opinion that Ramy shot himself in the foot by his behavior with the Pittsburgh Pro. Snubs like that – and it was a snub – don’t just get brushed off. I also think Derek will do the business of bodybuilding better. I think he’ll do what he’s told – when and how he’s told. He’s just enough of a meathead, just cocky enough, and young enough as to where they (whoever they may be) can get a great value out of his run. Other guys fit this mold like Nick Walker, but Nick lacks the popularity factor. I know on IG it seems like he’s more popular than sliced bread, but when I was at the Natural Vitamins event CBum stole the event. Everyone was there for him. Walker has a lot going for him but who can grow bodybuilding more? Walker or Lunsford? Again, it’s Lunsford all day. I can’t put my finger on it because to me their personalities are pretty similar and the only main difference between them might be a couple fingers of height. Still, I think the power is behind Derek.

Think about it. Flex Lewis – 7x 212 Mr. O – was left to wonder if he’d get the nod. He even made a joke post about it on an IG story. He got tired of being played with and retired. Derek on the other hand was acting like the invite was – whether Flex was in the mix or not – his. I’m not saying he knew he was going to get it, but maybe Jesus came to him in a dream and said “bro, slam that protein and maketh Tik Tok videos because thy application shall be approved.” LOL And maybe I’m being cast in the Braveheart remake. Whatever the case may be if it’s Ramy and Lunsford as the two last men standing, we’ll have a new Mr. Olympia.

And THAT you can take all the way to the bank!!