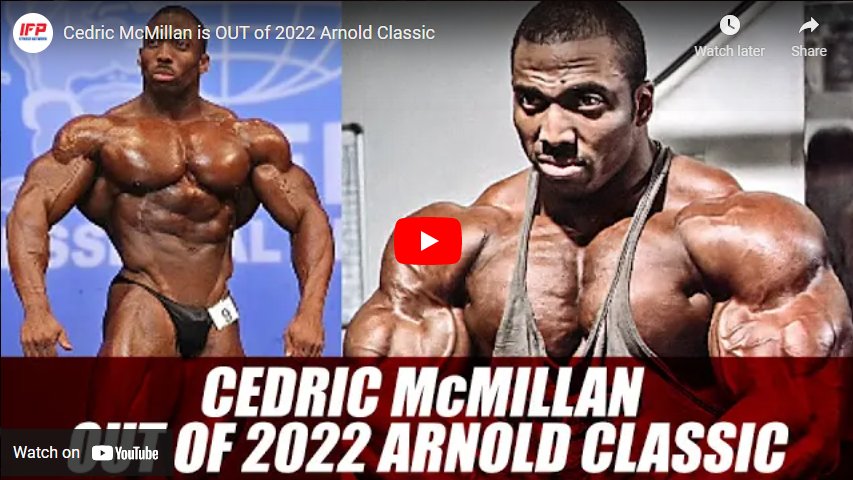 I was tagged in a story by my good friend, Kevin Grech of EvolutionOfBodybuilding.net, that seemed to be about 2017 Arnold Classic champion Cedric McMmillan. I knew Cedric was out of the 2022 Arnold Classic, but I wasn’t really sure why. To be honest, I didn’t really care, and I know that as a member of the media, I should.

To be frank, I didn’t like a video McMillan had put out some time ago shooting snapping turtles for fun and I also can’t really say I’ve ever been a huge fan of his. Besides the video in question, I never had anything against him and always recognized his amazing posing abilities, wonderful structure, and the many great packages he’s brought to the stage over the years. I also really dug the camaraderie he enjoyed with The Oak.

When I say I wasn’t a fan, though, I feel it’s important to clarify what that exactly means. I think to a lot of bodybuilding enthusiasts, the sport is either black or white, positive or negative – you either love a competitor – or – you must hate them. That’s not how I look at it. I’d say the vast majority of athletes fall into the category I have Cedric in. I don’t like or dislike them. I recognize they’re on an elite level and I celebrate their many achievements. I also report and weigh in on things they do that I disprove of.

So being totally real, I wasn’t all that curious insofar as why the former Arnold champ wasn’t doing the show. I will admit that in the back of my mind, when I saw the news, I thought maybe he should retire. I had this thought because of his issues in Reno at the Legion Sports, but also because he received a special invite to the Olympia when there was really no reason for it. Yes, I know, he serves in the military and yes, I’m very grateful for his service; however, there’s contests he could have done while being on active duty. There’s plenty of pro’s who do both, so why did he need a special invite? Then he gets the special invite and he doesn’t look like he really took his prep all that seriously. Nonetheless, what the f*cK do I know? Apparently not much and it’s not like I had a burning desire to find out more. Therefore, when Kevin tagged me on this post, I watched the video. Interestingly, Cedric talks about a health situation he’s dealing with, insults the media for doing its story, and gets a reaction from Grech, that I echo.

A post shared by Cedric McMillan -The One (@cedricmcmillan)

Apparently, there was a report about why Cedric wasn’t doing The Arnold, which aired on Jay Cutler TV. The coverage included Jay and legendary guru Milos Sarcev. For those living under a rock, Cutler has launched a full-fledged media hub, complete with supplements, clothing, coaching and more. The 4x Mr. Olympia and 3x Arnold Classic champion has always maintained a massive following and that has only continued, as he’s become a much sought-after commentator. The only difference between what Jay is doing and many other big-name Pro’s Gone Media, is that Cutler owns his platform. The same is said about most of the companies he promotes. For whatever it’s worth, I find JCTV’s content to be unbiased, very professional, and quite cutting-edge.

But what about privacy? What about letting the athlete make the determination if he’s going to discuss his health or not? These are all valid arguments, if we’re talking about the athlete speaking on the matter. That said, Cedric is an extremely popular champion, who was invited to do The Arnold, accepted the offer, but then was unable to compete. It’s the job of the media to report the news, rely on credible leads, and weigh in. Kevin Grech hit the nail on the head when it comes to his post in response to Cedric’s expletive about today’s fitness media. When he was riding high and getting favorable coverage, he didn’t seem to have an issue with it; however, when he’s in the news for his health and/or why he was unable to compete, perhaps he doesn’t like it so much.

Cedric was 100% correct in his assessment that he should come out and set the record straight. Many times, the media is relying on 50, 75, maybe 90% of the story, but seldom, if ever, do they have the full story. This is especially true for outlets that are working to break stories. While it’s the athlete’s call to speak or not to speak, sometimes the news coverage and commentary warrant it. After all, it seems the 2017 Arnold champ was getting a flurry of DM’s, texts, and phone calls from concerned friends and fans. That’s totally understandable and he could have privately set them straight – or – he could have taken to social media and done it that way. Perhaps, if he’d been upfront from the get go, no outlets would have tried to break the story. You can’t break something that’s public knowledge. On the flipside, it’s really not anyone’s business and athletes shouldn’t feel compelled to put everything about their private lives out for the world to see. Still, though, as a public person, he really can’t be all that surprised that in his silence, media outlets would try to figure out what’s going on. To a private person, this might all seem unfair, but to a public person, it’s kind of the way it goes. I’m not saying it’s right or wrong, it just is what it is and name-calling the media is a bad look.

Again, I’m not hanging on Cedric’s every word, not to say Kevin is, but Kevin probably noticed Cedric’s video and felt the need to sound off and tag me. To tell you the truth, I probably would have done the same. Fitness media, rarely, gets love and a lot of times we’re on the receiving end of a lot of abuse. I don’t fault Jay or Milos for weighing in. If anything, Cedric should be happy they even cared. I could see where a former Arnold champion could be offended that no outlet at least tried to poke into his business.

I know that if Brandon, William, or Brett couldn’t do the contest – for whatever reason – that Iron Magazine, StrengthAddicts, EVOB, MD and others would want to know why. And even if there was an official reason, many (if not all) of these outlets would still not be satisfied. I mean, how many times is the official reason, nothing more than a cleverly worded alternate narrative. All of the sites I just listed, plus several others, are investigative journalists. Bodybuilding fans are a hungry bunch and if you want to have loyal readers and viewers – you give the people what they want!!

All in all, I’m not going to talk about Cedric’s condition, even though he put a lot of info out there. I’m not a doctor, I have no medical training, and I hated science courses in high school and college. My motivation for writing this article is the fact Kevin shared Cedric’s little lash-out at the press and how I think it was both misdirected and not entirely called for. I could almost bet that neither Jay or MIlos care, but it’s the principle that matters. The media are the unsung heroes of the sport. We get no love, but for the love of God, don’t curse us on top of it all, for doing our jobs!