Can Tai Lopez Save Bodybuilding.com from Their Struggles? 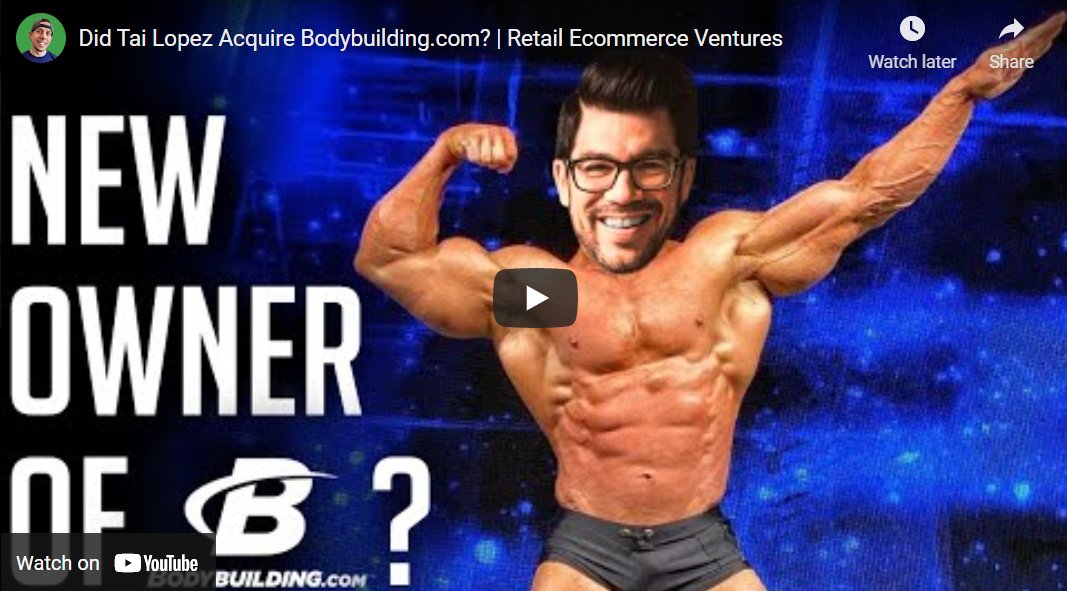 Tai Lopez is no stranger to building online businesses. For many, the name may not ring a bell, but I’m willing to bet if you Google “Tai Lopez Here in My Garage,” you’ll know exactly who he is.

Now, many of you may be wondering how Tai Lopez, who started out as a social media influencer, got involved with Bodybuilding.com. In a recent video, Tai mentioned that not only was his dad a professional bodybuilder, but he has been a fan of Bodybuilding.com for about 20 years.

Moving on from his social media influencer status, Tai Lopez got into real estate and cryptocurrency, that further helped him build his wealth. Unlike most millionaires, Tai Lopez wasn’t handed a silver spoon growing up. He lived in a trailer and basically came from nothing. Eventually, his wealth grew, allowing him to acquire big brands at a discounted price due to their revenue slipping when physical retail locations began drying up, and e-commerce started taking over.

When looking at his current portfolio, Tai Lopez currently owns brands such as Modell’s, Dressbarn, Radio Shack, Pier 1 Imports, Stein Mart, MentorBox, Linens ‘n Things, Ralph & Russo, Franklin Mint, and FarmersCart. Essentially what Tai did was acquire these brands and help them improve their online sales to adjust to the changes in consumer purchase behaviors.

So, how does Tai Lopez actually fit into the equation with Bodybuilding.com, did he actually purchase the brand, and is it possible for him to save them from their struggles?

There seems to be some confusion out there on what exactly took place between Tai Lopez and Bodybuilding.com. When the deal broke, I was getting texts left and right asking what my thoughts were. I had to go do my own investigating to understand what took place since there was some confusion.

Tai Lopez went to his social media and mentioned he bought Bodybuilding.com while returning from a trip to Spain. However, none of the press releases that I’ve read said anything about him “acquiring” or “purchasing” the brand, but rather “partnering” with Bodybuilding.com.

While I don’t have all the exact details (I’m not sure anyone truly knows how the deal was structured), it seems that Tai Lopez may have purchased part of the brand and not fully acquired them. In all the statements I’ve read, executives of Bodybuilding.com have mentioned they are thrilled to “partner” with Tai Lopez and his company Retail Ecommerce Ventures (REV).

The strategy of REV is to take struggling brands and utilize their name to recreate them online through affiliate marketing programs.

Bodybuilding.com CEO Karl Walsh said, “REV’s expertise in e-commerce, digital marketing, technology, and community-building is a significant value-add to our platform and will further catalyze our growth both domestically and internationally.”

This is interesting to me as I’ve worked with Bodybuilding.com for many years as a writer and on some behind-the-scenes work where I was labeling contest posing images and such, and then again with them when I controlled their account while I was working for MET-Rx. Honestly, at those points, Bodybuilding.com was running like a well-oiled machine before the wheels seemed to fall off after Ryan Deluca departed the company and sold it off.

I slowly started to see people I was working with and knew personally either leaving the company or being let go. These were brand and account managers, content managers, and part of their marketing team. When you look at those jobs that were eliminated, it’s pretty easy to see why things went downhill fairly quickly. Those aspects were their bread and butter to get traffic over to the site and bring in revenue.

Then you had Amazon slowly becoming a monster in the industry and selling sports nutrition products on their website. Honestly, every conversation from a brand perspective when talking with the Bodybuilding.com team involved Amazon and their pricing and how they’re selling way below their own website prices. Amazon became a real threat to Bodybuilding.com, and when the luster and hype of Bodybuilding.com faded, so did its sales.

Can Tai Save Bodybuilding.com?

I’m fairly certain that Tai Lopez is only interested in their database. With that, he can do a lot of different things. Unfortunately, I don’t feel like Bodybuilding.com has the appeal it once did. With so many online stores selling products, brands and competitors creating content for their own website, and the term “bodybuilding” being considered very niche, I’m not sure the brand can be saved.

Tai would need to do a bunch of celebrity collaborations through Bodybuilding.com to get more people over to the website, leverage their social media better, and create better content for their website and YouTube channel. If he can get BodySpace up and running to the point where people actually use it (it has pretty much sucked from day one), that may be a way to get people to frequent the site more often.

So, my thoughts? I’d look at Tai Lopez as the underdog in this fight, and I’m always one to root for the underdog and never count them out. Will this be a challenge and an uphill battle? I think so. But at this stage, what does Bodybuilding.com really have to lose after its revenues have been tanking? I hope Tai Lopez brings Bodybuilding.com back up to the top of the game, and while he’s at it, he can bring me back on to write for Bodybuilding.com once again (just saying).

Newer Post
Aaron ‘The Rat’ Singerman Out of Prison in 2024!
Older Post
The Benefits of Using Vitamin C Supplements