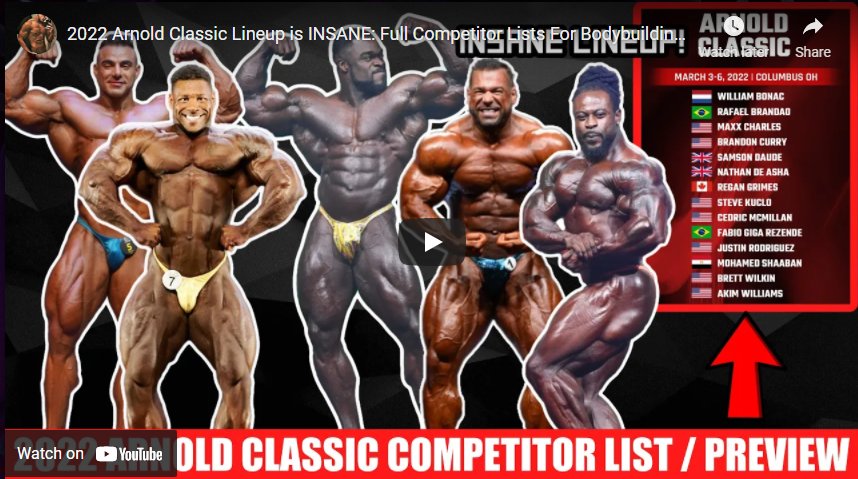 The 2022 Arnold Classic is already shaping up to be one of the most epic bodybuilding contests of all time. After what I saw at the 2021 Mr. Olympia, it seems that Big Ramy will rule the sport indefinitely. When Brandon Curry hit the stage, bringing 20lbs of added muscle, ripped to shreds, against a guy who was holding water and made no significant improvements, it really said a lot. The fact that Curry led Ramy in the prejudginging, yet was behind by a point on the scorecards, was also very telling.

It’s one thing if the odds are stacked against the challengers, but it’s quite another, where toppling the champion seems all but impossible. After the 2021 Olympia, that particular contest has lost a good amount of its edge in my opinion. I’m still dying to see the 2022 O, like fans all around the world, but there’s just a lot less suspense with regards to the placements.

The Arnold Classic, on the hand, is the next best thing. To see a guy like Brandon come back, accepting the invite, and bringing his best to Columbus, OH, certainly has me thinking that I have to be there! I almost always attend, but since the chaos of Covid, it’s been less of a priority. Now, however, I find myself counting the days before the big contest. In this article, I’d like to talk about why this show will have a powerful impact on the direction of the sport in 2022, why Brandon and William are competing, and why I suspect Nick Walker is not.

I think a great many people are still scratching their heads after the 2021 Olympia. To say that many fans were left dumbfounded, would be the understatement of the century. If you were to have looked at what people were saying during and after the prejudging, you’d know what I meant, Everyone was banking on Curry toppling Ramy; in fact, few thought Ramy could save face at the finals. No one, however, thought he could win.

Bodybuilding contests have always been decided in the prejudging and it looked to most, myself included, like Ramy had been annihilated early on. These conversations weren’t limited to any particular forum, group, or page. These commentaries were being made everywhere. The media followed along, with pundits and handicappers reaching a consensus, and that was that Ramy didn’t take Curry seriously enough. It was looking like his blunder would cost him the title, but in the end, we all know the narrative that was forced down our throats, that Ramy came back looking absolutely amazing for finals, suggesting Brandon must have faded (which he did not), and that the champ was able to miraculously retain his title. If that sounds like a steaming pile of horseshit to you, I’d concur.

This is why so many people are excited to see Brandon no longer putting all his eggs in the Olympia basket and looking to the Arnold Classic. After two back-to-back runner-up’s, The Prodigy may have had it. Maybe he’ll follow in Kai Greene’s footsteps. I’m sure he’ll do the 2022 O, no matter what, but what if he gets screwed again like in 2021? Let’s say Curry wins in Columbus and takes another 2nd to Ramy in Vegas? Another 2nd where the world thought he should have won… At what point does Brandon’s camp bid the Olympia farewell, for good?

If Brandon wins the Arnold in 2022, coupled with two consecutive runner-ups to Ramy, then 2022 may be the year when the judges judge him correctly because that might be it. He may do just like Kai and never come back. In fact, 3 might be the magic number. Kai did the runner-up thing at the O, 3x, then did one more Arnold and never came back.

With Brandon, he already has an Olympia title, so one might be enough. If winning is simply not in the cards, he could just as easily market himself as Mr. O and simply compete once a year in Columbus, holding that title for the next few years. Between working with 015 Nutrition, Carbon Culture, and his many other sponsors, there’s simply no need to push himself to the limit, if Ramy winning is nothing short of a forgone conclusion. Perhaps, Athleticon will come right, and court Curry, correctly. Ramy can “dominate” at the O, while Brandon could [really] dominate, everywhere else.

The Arnold Classic is special for another major reason. It was here that Brandon and William battled. They both have won the title, they both have gone head to head, and they have both forged an ironclad friendship that has survived the test of time. Both guys have also been consistently overlooked by bodybuilding media outlets, despite their stellar contest records and track records for making gains. In fact, the year Ramy won his first Olympia, Bonac shut him and Dexter Jackson out in Columbus, OH. No matter how much taller and heavier Ramy is, when Bonac was on, he couldn’t hold a candle to him.

And last year, many believe that the only reason Nick Walker was able to win the Arnold was because Bonac wasn’t there. While I won’t take anything away from The Mutant or from the amazing package he brought to Ohio, my prediction to win, was Bonac and after seeing what Nick brought, my prediction wouldn’t have changed.

When Bonac is on, very few can stop him, and while I think him being ignored at the O has taken a toll on what he brings to the Superbowl of Bodybuilding, when he hits the stage in Columbus, you’re seeing him at his all time best.

This, too, is why I think bodybuilding fans will be in for a very special treat, to see Brandon and William, giving 100%, on a stage where they both feel like they can win. I doubt either of these guys think the same about the Olympia. It’s not that they can’t win based on their physiques, it’s just that Ramy’s place seems so cemented, that knocking him out (whatever that means), seems totally out of the cards.

With regards to Nick Walker not defending his Arnold title, I have a few things to say. For starters, I texted him immediately after the O and we talked a bit on IG. I basically told him that the key for him was to focus 100% on the 2022 Olympia. That meant, no Arnold defense, definitely not doing other contests, but also reducing stress as much as possible. I told him that I thought his priorities should be the Olympia prep, getting out and meeting fans all around the world, doing guest posings and working closely with his sponsor. So far, he’s done all of these things, including his announcement not to defend his title in Columbus. This approach puts Nick in the best position to give his body a rest, focus his efforts on peaking just once in 2022, and making the necessary improvements to, hopefully, move up the rankings. That being said, I don’t think anyone would ever have expected Brandon Curry to throw his hat into the ring.

Moreover, while Walker placed one spot higher than Bonac at the ‘21 O, that hardly quieted the fan demand for a rematch between the two. Many who trekked to Columbus in 2021 to see the epic showdown, were left with the anticipation, but never got to see what they came for. While it’s conceivable that Walker could beat Bonac in Columbus, it would take everything out of it to do it. But then, he’d have to beat Curry, as well, not to mention new talent wanting to make a name for themselves by placing in the money at the second most prestigious bodybuilding show on Earth. The fact is, skipping Arnold is probably the best thing Walker could have done for his career. He doesn’t want any part of Bonac or Curry at 100% in Columbus. Trust me. He’d get his ass handed to him.

All that being said, the upcoming Arnold Classic will have an undeniable impact on the sport of bodybuilding in 2022. If Brandon wins, then between that victory and his two runner-ups, he will force the Olympia marketing teams to make it a two man show. If William wins, he will force the Olympia to take him seriously, but will they? He won the Arnold in 2020 and got virtually no attention. Perhaps a Curry win won’t mean much come the Olympia, either.

Either way, the Arnold will be an epic battle and unlike with Walker, Arnold would stick around for a speech from either The Prodigy or The Conqueror.

One thing’s for sure, the 2022 Arnold Classic will be one for the record books!! Will you be there?