Blessing Awodibu and Nick Walker: The Feud’s Back On! 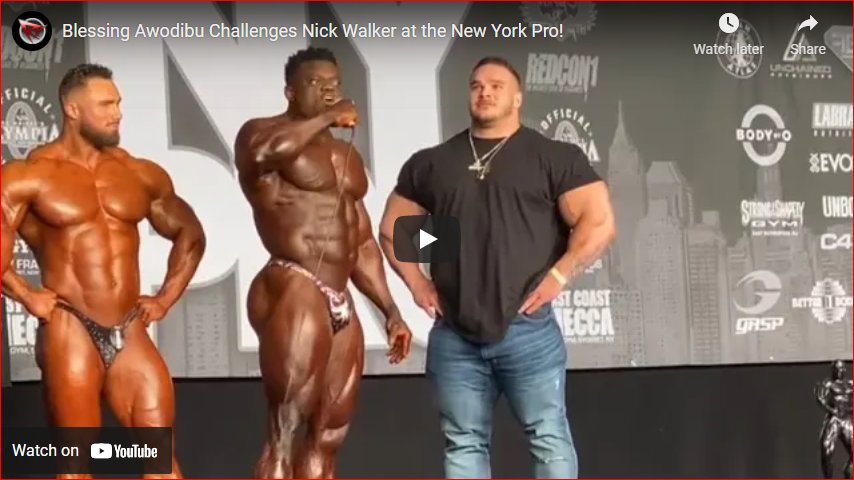 Feuds make bodybuilding fun!! There I said it. I said what everyone’s thinking but no one actually ever likes to admit. Rivalries bring about the true competitive nature that so many fans of muscle and size can’t get enough of. The reality of the matter is that countless bodybuilders and supplement companies get it way wrong. Sure we all love to see the freaks chowing down and lifting huge poundages in the gym but how much of that can you give your viewers? It’s gets old and fast.

The main issue with feuds is when they go too far. We’ve seen some of these wars go no holds barred. Everyone is fair game and nothing is off limits. That’s when things can turn personal. Some rivalries can even result in the participants coming to blows. Although many have said that the rivalries between guys like King Kamali and Craig Titus were all for the cameras, others have said that if these guys were left alone in a room, all hell would’ve broken loose. Whatever the case may have been, it brought more eyes to the sport.

The purists will argue that negativity doesn’t bring about the kind of growth that will help catapult the sport into the mainstream. That may very well be the case but what if your goal isn’t merely that bodybuilding takes its place next to basketball and baseball? What if you couldn’t care less if bodybuilding becomes accepted by people who otherwise wouldn’t know it if they tripped over it? Real muscleheads want to enjoy the here and now and nothing gets people more excited than two elite-level bodybuilders committed to outdoing the other.

Nick Walker has won a NY Pro and an Arnold Classic. Blessing Awodibu has won the Indy Pro and the NY Pro – in back to back weeks – without a major supplement sponsor. Nick left his longtime sponsor for a new one just months ago. The similarities between the two hulking muscle men are undeniable. In 2021, Walker bested Awodibu, but will 2022 be different? The best part is that both champions find themselves in rather unique aspects of their careers. Blessing is also in a far better spot to challenge The Mutant than ever before.

A lot has changed in a year. Nick Walker was far more decorated in terms of top honors than Blessing this time last year. Nick was staying busy, amassing the biggest titles in bodybuilding. Meanwhile Blessing was banking almost exclusively on catchy sound bites and the huge amount of buzz his then-sponsor was creating. Everyone had seen the Irish bodybuilder in skits, commercials, and ad campaigns that saw him shoot to the top. It seems that everyone had Walker in their crosshairs for winning the biggest title in the sport. In fact, a great number of insiders and handicappers put the young North American champion in their Top 3 picks. Blessing on the other hand didn’t have much in terms of wins so the rivalry was more in the imagination of fans than anything else.

As of this past weekend, Blessing can now lay claim to Midwest domination, as well as having the bragging rights of having won the 3rd most important bodybuilding contest in the world. The NY Pro (formerly The Night Of Champions) is second only to the Arnold Classic and the Mr. Olympia. For a great many future champions the NY PRO / NOC was the springboard to their success. Let’s not forget that that’s where The Shadow got his first big break in the United States. Not only did Blessing win this prestigious title in the Big Apple but he used that very opportunity to reignite a very special rivalry with a longtime friend.

Unlike rivalries of the past these two great champions never took it so far as to where it became personal. They were able to keep their heads in the game while still giving the fans something to talk about. And when Walker more or less won the race, he didn’t gloat, instead he extended an olive branch and the two became friends. It’s from that friendship that this next chapter in their competitive journey begins. That’s really important because even the purists may recognize that this next race between the two may see some very positive marks for bodybuilding. Some of the obvious wins would include more interest in the sport and renewed interest in the Olympia.

At a time when many believe Big Ramy has grown bored with his title and with no clear successor in sight, bodybuilding fans need something to preoccupy themselves with. Just one look at Facebook groups and the popular message boards and it becomes patently obvious that the fans are becoming bored. Even popular YouTube channels don’t know what’s going on with The Egyptian Phenom so another Walker/Awodibu rivalry is just what the doctor ordered.

The back and forth between Blessing and Nick was humorous at times but at others it seemed like Awodibu was forcing it a bit. The fact is Walker is still a bigger star than Awodibu but the two have history. On the flipside, Nick seems to have a real beef with The Butcher Brett Wilkin. Many of the fans and influencers have been circling over this potential news story with great interest. There the beef has more of a likelihood to get personal and while both guys there have similar credentials and even similar looks, more fans seem to prefer the rivalry with Awodibu. For many reasons, Blessing having some laughs with Nick, may reignite a fun feud and kill any chances of a toxic one with Wilkin from really getting underway. Afterall, I’ve never seen a top pro embroiled in two active feuds simultaneously – but hey – this is bodybuilding! Anything can happen here.

Speaking on Blessing I have to say that I find it very interesting that he won back to back contests without a supplement sponsor. An entire week has passed since my article on the break at Iron Magazine. Almost two total weeks have transpired since the story became news. To date, nothing from the Redcon1 camp and nothing really from the Awodibu one. Will we ever know why the two parties decided to go their separate ways? And if it wasn’t Blessing’s idea then how silly does this whole thing make RC1 look? I mean they dropped one of their most recognizable athletes and then he goes to Indy and wins big! The very next week he goes to the internationally acclaimed NY PRO and wins again! Right now every company on the planet is looking at Blessing. He’s not only got the personality to generate interest but he’s got the titles to boot. Whereas last year he was just a great physique with a lot of buzz, now he’s all those things plus has the titles that make him a true contender for the Olympia Top 6. Now is the time to sign this fantastic athlete!

Speaking of buzz, who can forget that Nick is signed to Hosstile Supps? Who can forget that Nick is part of the biggest podcast in the sport – BroChat. At what point does Fouad Abiad say “let me give Blessing a look?” I mean this is a guy who could make a fine addition to both the supplement company roster and/or as a guest on the most popular program in the sport. Why have Blessing and Nick battle it out on Iron Debate or for a Desktop Bodybuilding type program when Abiad has the platform where they can both appear? It would almost seem nonsensical to me if Fouad hasn’t at least contacted Blessing. At this point I’d imagine a who’s who of company CEO’s and star athletes have been in the rising star’s ear. And while companies are no longer signing bodybuilders to huge contracts like in yesteryear, there’s no question that they’re glued to social media and well aware of who’s hot and who’s not. Right now Blessing Awodibu can write his own ticket but is he done?

With the Olympia in December – anything goes. Normally most top guys would stop competing by May or early June at the latest. This was because the Olympia was always held in September and the top guys wanted to rest up and get to work with their coaches. Having the biggest contest in the year in the last month of the year, gives competitors that much more time to compete and earn. What if Blessing isn’t done yet? What if he wants to do another show? What if he wants to do a few more? The fact is he could snag another win or two and still have ample time to give his body a rest and go 110% in for the O. On the other hand, what’s Nick going to do? To date, he hasn’t done any shows in 2022 and he may be giving his body a full rest for the O. The danger there is, at what point does he get tired of seeing Blessing win it all? Will he have the willpower to sit on the sidelines while his rival gets all the accolades? I say we see Nick on a stage before the O. The question is will he share that stage with Blessing?

The more likely outcome is that the next time Blessing and Nick are on stage together will be for the 2022 Mr. Olympia at the Zappos Theater in Las Vegas, NV. I have a feeling both men will be pounding on the Top 6 door and that both will have a very real chance of breaking into the Top 3. What say you? Where do you see these guys ending up when the smoke clears and the dust settles? Could either of these guys be your 2022 Mr. Olympia?