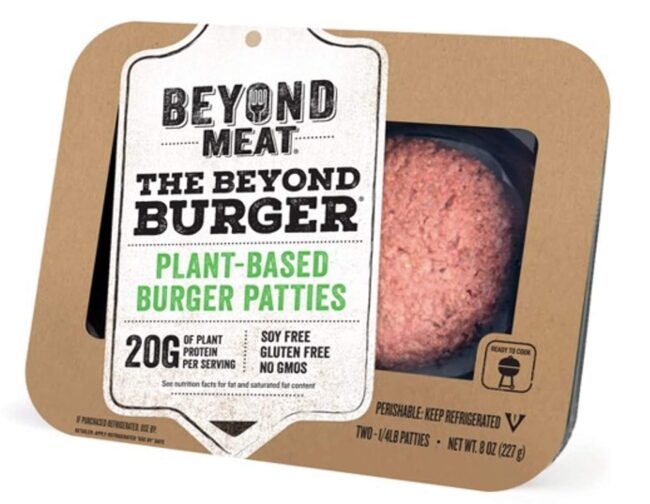 There are times when articles seem to just write themselves, and this is one of those articles. You can’t even make this up, and it’s too funny of a story not to share with you. But if you follow nutrition and “innovation” in the industry, you’ve most definitely heard of a brand called Beyond Meat.

Beyond Meat is a plant-based, vegan-friendly brand that creates meatless products that imitate real meat options. For instance, they have burgers, sausages, jerky, etc. If you work for such a company, you’re probably someone who follows a meatless diet that does not contain animal products (or one can assume since you’d want to believe in the product you’re selling consumers).

Well, the COO of Beyond Meat, Doug Ramsey, seems to be missing meat in his diet as he went straight cannibal on a guy’s face.

No, you can’t make this up.

You probably also can’t make up for the falling sales from a business already going down the tubes. Beyond Meat has watched its stock fall 73% this year alone and has witnessed dismal sales and operating challenges during its downward spiral. This incident may be the icing on the cake of a business that has been having some major challenges.

Also, for what it’s worth, Kim Kardashian is a spokesperson for Beyond Meat. She went from beating meat in a sex tape that made her famous to telling people to stop choking the chicken and go plant-based? Isn’t that a strange turn of events? (Come on, I know you laughed a little over that)

According to police records and about 1,000+ websites now reporting on the incident, Doug Ramsey was arrested for biting a man’s nose in a parking garage after an Arkansas football game and was released on $10,000 bond. Last I checked, a nose wasn’t part of a plant-based or meatless diet.

The incident took place in the parking garage outside of Razorback Stadium after the game between Arkansas and Missouri State ended.

I mean, what type of person bites the face of another human being? I have gotten furious at people, and never has it crossed my mind that I should bite someone in the face — that’s just odd, but who nose?

Oh, but it gets even better. Ramsey was charged with terroristic threatening and third-degree battery. At the time of writing this article, neither Ramsey nor Beyond Meat has made a statement regarding the incident and arrest.

Let’s get back on track with the incident. You could say Ramsey had a real “beef” with this guy, no? A little humor to go along with such a crazy story.

You’d be naïve to think that people don’t take their college football seriously but come on now — who does this?! This wasn’t just some minor altercation either. Reports are that Ramsey punched through the back windshield of the defendant after the defendant’s car allegedly made contact with the tire on Ramsey’s Ford Bronco. So, a fender bender turned this guy into Hannibal Lecter?

The defendant exited his vehicle when this all took place, and it was then that Ramsey allegedly grabbed him and began punching the defendant, and bit his nose — ripping flesh from the tip of the defendant’s nose. To add insult to injury, Ramsey told the defendant that he was going to “kill him.” That’s definitely a no-no and will get added charges tacked onto your arrest.

Passengers from both vehicles jumped out of their respective cars and broke up the altercation.

Was there alcohol involved? I have yet to find any source saying Ramsey was intoxicated (not that it would make things better or let him off the hook).

All in all, Ramsey has some anger issues he needs to figure out (perhaps he’s angry that he hasn’t been eating meat), and he is scheduled to appear in court on October 19, 2022. We shall see if Beyond Meat keeps him around or tells him to get lost.