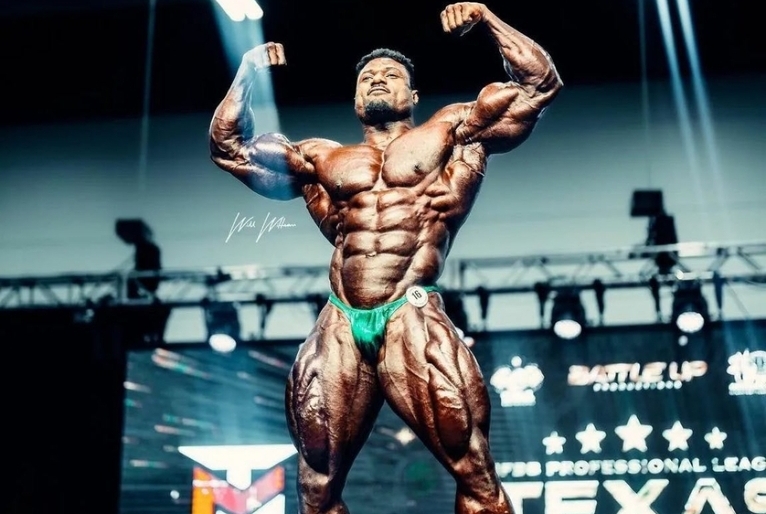 It seems everyone in the world of bodybuilding is talking about Andrew Jacked and the utter domination he unleashed at the Texas Pro this past weekend. In fact, even Arnold commented on a social media post of his which is absolutely unheard of. And further to that point every single bodybuilding outlet has had nothing but raving reviews about his performance in the Lonestar state.

The fact is the judges gave Andrew straight 1st’s for prejudging and finals is a huge piece of news in a sport as subjective as bodybuilding. Everyone in the audience also knew what was up. The real decision was between Martin and Steve, but the winner spot was secure. Kamal also did this contest and was banging on the door within the Top 5, but the top spot belonged to Andrew all day.

At 290lbs and towering over the competition at 6’2 he’ll be hard to miss at the 2022 Mr. Olympia. As a result of his big win the bragging rights he’ll get will provide him with a huge advantage over a great many competitors who maybe have been on top for longer and/or who are perhaps living off their pasts to a certain extent. There’s certainly no shortage of guys who command a lot of conversation but haven’t really done much in the last 2-3 years.

Andrew’s big win in Texas ensures that he’s going to go into the biggest show in bodybuilding with a huge amount of buzz. Further to that he’s competing again at the Arnold UK which might explain why Arnold commented on one of his posts. Could this be the beginning of another great relationship like that of The Oak and the late great Cedric McMillan?

The fact is AJ is 6’2 and at 290lbs that will dwarf guys who are tipping the scales at 300+. If the former IFBB Elite superstar Michael Krizo does in fact qualify for the O and takes the stage with Andrew then you’ll have some freaky tall bodybuilders looking over heavier guys like Big Ramy and possibly Nick Walker. Although bodybuilding is not a tall man’s sport and does tend to favor shorter guys, there’s just something about that 6’ – 6’2 window that’s not only reminiscent of Arnold but if filled out properly in the modern age creates a certain look that makes the more compact guys look small. And looking small is never a good thing in the muscle game.

That being said, there is such a thing as being too tall. Guys who have pushed 6’4, 6’5, and beyond just can’t fill out enough. They either look lanky or they just lack the freak factor. This isn’t the case with the subject of this article.

Jacked has insane wheels so much so that they’re almost like his calling card. His quadriceps hold ridiculous size and when he poses he leaves many guys in the dust when it comes to lower body development. Interestingly this is an area where taller guys miss the mark. Tall guys don’t always have the biggest legs but Jacked certainly does! His hamstrings are also very impressive and his calves are pretty decent as well. That’s very important considering that legs are the largest muscles in the body and they are so on point that it’s scary to think about what he can do come December.

The fact is December is more or less right around the corner so what can he do? What I’m referring to isn’t adding more size rather it’s getting more separated. If I was to critique the Texas champ on anything it would be that. He was peeled and looked great, but he could stand to get more peeled and bring better separation. I suspect we’ll get a preview of that for his next and final show before the O.

Again, I don’t know for sure that the Arnold UK will be his last show until the Olympia but I certainly hope it is because while the hype that comes with winning is pretty addictive the last thing I’d like to see is this great champion burn out. The fact is he’s already made the commitment to compete at the Arnold so to pull out would look very bad; however, if he’s committed to any shows beyond that I’d strongly advise him on pulling out. I’d like to see more lower back condition as well but these are things that can be easily fixed. The hard part is building a great physique and he’s already done that.

With regards to his posing – the man knows what he’s doing! When the judges give you straight 1st’s for both the prejudging and the finals you know you’re on point. The fact is I’ve seen guys with clear-cut winning physiques drop a placing or two because they don’t hit the ground running. Some guys will practice their posing for hours yet clam up when they’re in front of a tough panel for comparisons. Some of it might be attributed to stage fright, maybe they don’t like being in front of big crowds, or maybe they get intimidated by the competition.

This last point is one that’s lost upon many of the fans but I assure you it’s a thing. Some guys literally lose their nerve because they focus on the competition backstage and they start second guessing their prep and what they look like. Once these types of thoughts get in your head they can easily derail what would otherwise be a perfectly good outing. Thankfully none of that was in Andrew’s head. He hit the stage with the confidence of a winner and he presented his physique in the best light for each mandatory pose.

Not only did Andrew Jacked bring the winning physique to the Texas Pro and not was his victory unquestioned by any media outlet – it was celebrated by them all! Further to that it should be noted that this was a very deep lineup and to have dominated the way Jacked did says a lot about him. I have no doubt he’ll win the Arnold UK but more importantly I suspect that between him and Krizo they will have made an undeniable impact on the Olympia landscape. If these taller guys are able to get the judges’ attention they may shock the world. I mean Hadi is 5’6, Nick Walker is just 5’7, Brandon Curry is 5’8 and Big Ramy is 5’9. You put a shredded bodybuilder at 6’2 280-290 on stage and no matter how wide those other guys can get they will still get dwarfed.

Bodybuilding might be a short man’s sport but there have been situations when taller bodybuilders with great crispness and great aesthetics have stolen the show. Who’s to say Andrew won’t be battling in the Top 3 come the 2022 Olympia?

Only time will tell, but one thing’s for sure, Andrew Jacked has shut-up a lot of haters and sparked the interest of the bodybuilding world. I’m very excited to see what this great champion does next. Do you think Andrew Jacked can win the 2022 Mr. Olympia? How well do you think he’ll do?

Newer Post
Diabetes and Aortic Stenosis: A Lethal Combination
Older Post
What Is CoolSculpting and How Often Can You Do It?