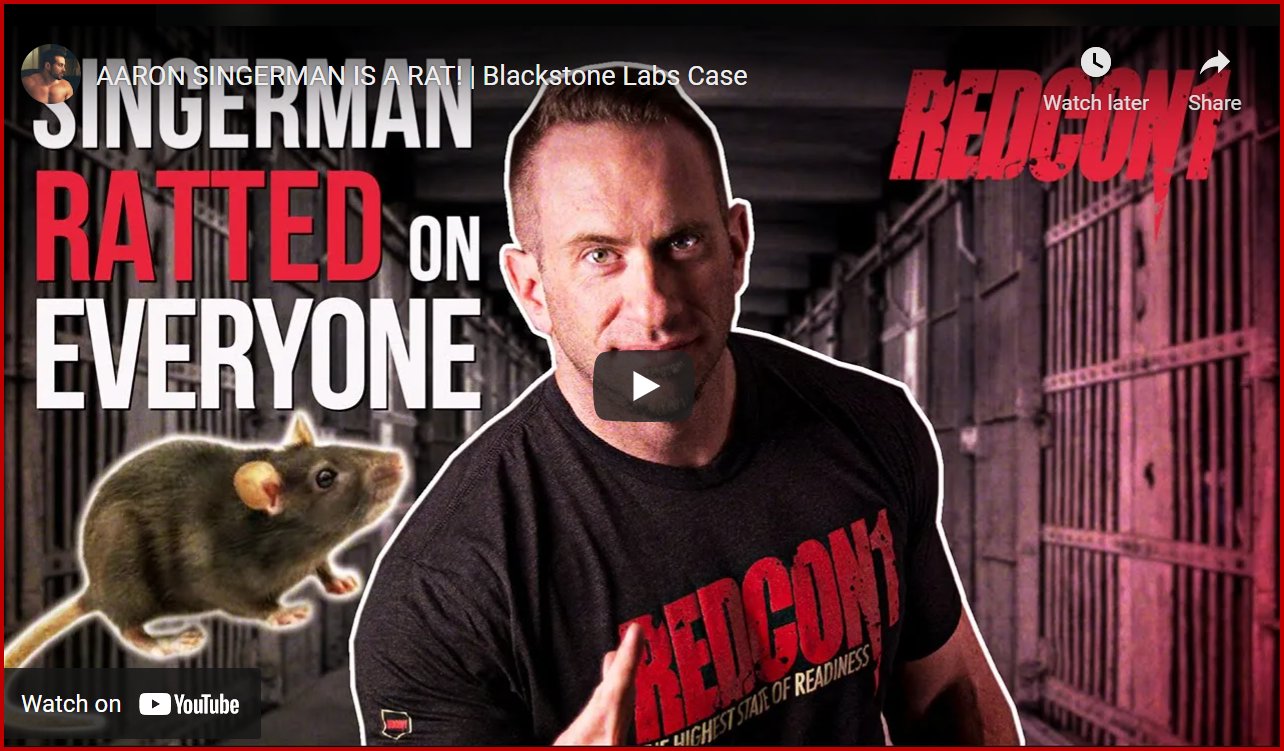 While PJ Braun was ready to fight till the end his former brother and partner in Blackstone Labs, Aaron Singerman, caved at the 11th hour striking a deal with the government and agreeing to testify against him. Millions of dollars had been spent over the years in preparing for what some believed would have been a successful defense against one of the toughest indictments in fitness industry history. While other former co-defendants who accepted plea deals were wrongly called rats, it seems that the only rat in this case, will be the one getting out in 2024.

While PJ languished in county jail cut off from the rest of the world, Singerman was relocated to his federal facility in Pensacola, FL at lightning speed. Moreover he just got 1.5yrs shaved off his sentence!! Who even knows what other perks he may be receiving in exchange for selling out Braun. The fact he was even given a deal that late in the game suggests that the defense had at least a fighting chance. The government doesn’t reward defendants that make them work. That’s the whole point of a plea agreement. 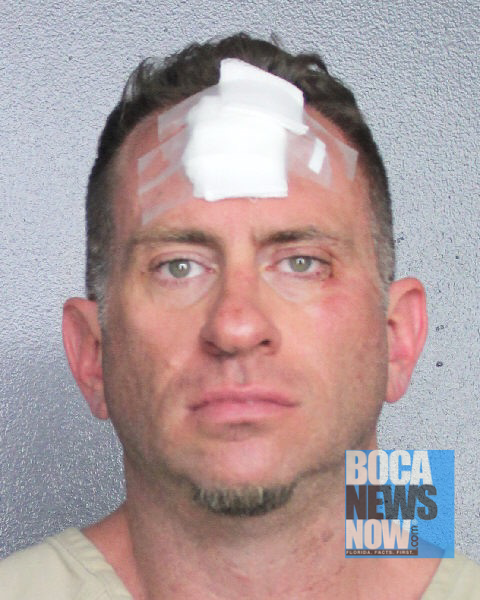 After all, Blackstone’s majority owner has the distinction of being the only defendant in the bodybuilding world (that I’m aware of) whose beat the government. While it’s rare, it’s possible. If the defense had successfully argued that the supplements being sold were in fact not illegal at the time then all other charges predicated on that charge (e.g. the money laundering ones) would have gone away. But this is article isn’t about the merits or weaknesses of the aforementioned case. That’s done and over with; however, it’s very interesting how treachery is rewarded in the real world.

When news that Aaron flipped broke countless influencers in the fitness industry sounded off. They couldn’t believe he would have done something as low as that. Many criticized the extravagant and boisterous supplement mogul as having no backbone. Moreover, Singerman made a mockery of the trial getting himself arrested not once but twice for alcohol/drug related crimes. Interestingly, the governement gave him what amounted to slap on the wrist. So what if they revoked his bond? He’ll probably get those two weeks credited as time served.

And what if this 18 month present is just the beginning. Maybe Aaron will be able to give the Feds more information or maybe he’ll heroically save a guard’s life in prison. Who the hell knows how it’ll be marketed, but what if he gets out sooner than 2024? Aaron is friends with a lot of important people, including folks who have pasts. And some who maybe have presents – meaning they did bad shit during the time Aaron knew them. Maybe he sings again. Maybe he’ll do a weekly concert. Lol

When you’re dealing with a snitch no one and nothing is off limits. Anything and everything they know is currency. In Monopoly’ terms it’s very much a Get Out Jail Free card. He could also give information in exchange for having something in his back pocket. Lol. By that I mean credit for any future issues down the road. After all, Aaron has a tendency to get himself in trouble so maybe he does easy time for selling out PJ and maybe next time he’ll get easy time for you selling you out. Yeah YOU – I got some heavy hitters who read my articles – and you know that if you partied with AS you prolly let go of some secret shit while you were drinking, smoking, boating or skiing. Every piece of information has value. And if you think your friendship was “different” or you guys have Bro Code you might want to brush up on your license plate making skills now.

The longer Aaron sits in prison the more tempted he might be to keep singing. The fact is he’s a turncoat and while some may be fine with that, I’m not. I don’t like the fact that the government rewards snitches by giving them sweetheart deals. And I honestly would be very curious what some of Aaron’s most ardent allies in the industry think of all this. Would they dismiss his treachery for the simple fact him and PJ had had a falling out? Would that excuse him being a Judas? And if so, do they still think of him as a man’s man?

Who, if anyone, that’s got real street cred would ever want to be associated with someone like this? It annoys me to no end that my friend Robert Dimaggio would be called a rat when he’s the farthest thing from it. He plead guilty to a single count. Whereas Aaron and PJ had half a dozen a piece, Rob was charged with just one count for the simple fact he was a part owner of Blackstone. And by that point he was largely silenced ⅔’s to ⅓. When he could no longer reason with his other two partners he sold his third and exited the partnership. That’s not being a rat, but if you held that opinion of Robert, what’s your opinion of Aaron?

What Aaron did is as low as it gets yet I’m sure he’ll have supporters arguing that he was the smarter of the two, maybe the better hustler, or maybe put his family first. However you rationalize betrayal that’s entirely up to you. The fact is Aaron Singerman is a rat and he got rewarded for bowing down despite all the money and effort that had gone into mounting a very strong defense to a powerhouse case put on by the government.

On the flipside, had the defense managed to win, it could have been a landmark case that would have made the government think twice before scrutinizing every aspect of sports supplements and the bodybuilding world. It would have been the kind of decision law students would have learned about and would have provided a great deal of primary and persuasive authority on any number of future cases. 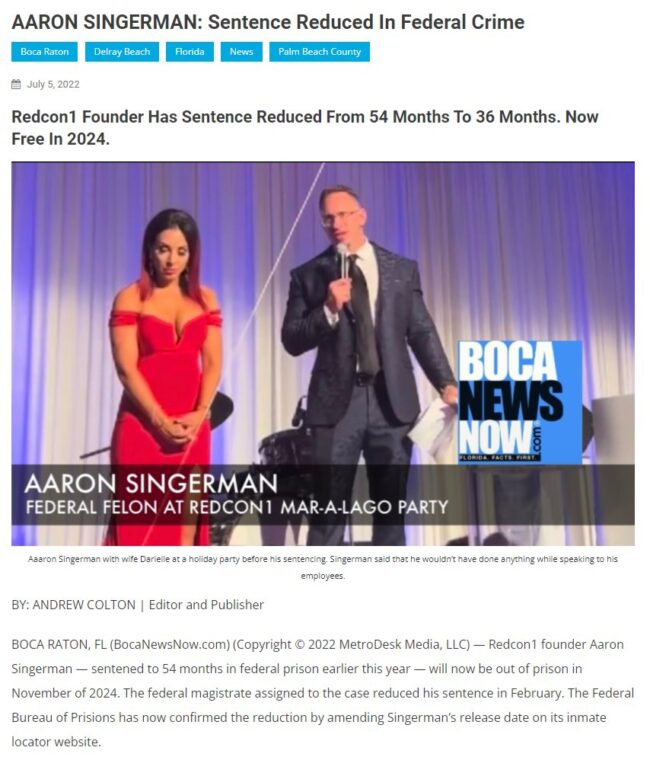 At the end of the day, PJ Braun stood for something and was ready to fight till the end. Aaron Singerman showed the world what he was made of and may continue singing if it means spending less time in prison. PJ is a man’s man and he’ll do his time as such. When he comes out, he’ll lead Blackstone Labs or whatever company he’s involved with all the way to the top. I don’t even want to mention the other guy’s name anymore. I’m sure 36 months is just the current figure and he’ll be out way before 2024. How crazy would it be if he was out by next Christmas? Of course he’d have to sell out a lot more people but what’s one, two, three or four more ruined lives if it means he can come home sooner? Lady Justice is probably sick to her stomach.

Oh well, I can’t say I am surprised and hopefully my article will generate some conversation. And if you support Aaron ‘The Rat’ Singerman and if anything in my article upset or offended you, well you can kiss my ass.

Newer Post
6 Types of Vegetarian Diets: Do You Know the Differences?
Older Post
Can Tai Lopez Save Bodybuilding.com from Their Struggles?