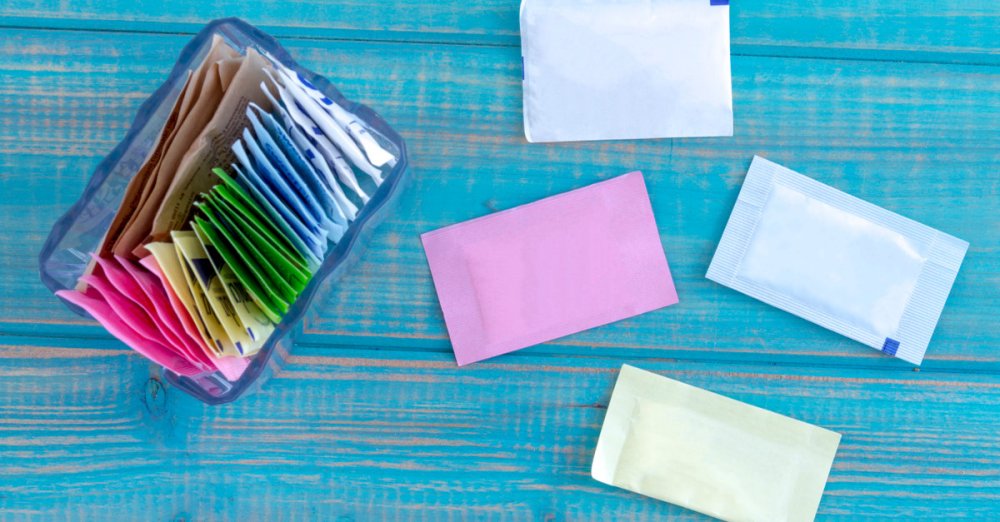 I will say, if you see maltitol, run away fast, if you’re taking in anything more than what would be considered small amounts. If you don’t heed my warning, you’ll find yourself running to the bathroom. Think John Witherspoon on Friday, trying to get through traffic to get to the bathroom. It’s not a good feeling. That being said, people just can’t give up sweets and treats, so they’ll even risk getting the shits to have them. Again, my apologies if my bluntness offends any of your sensibilities. We, here, at Iron Magazine are very mindful of the PC police.. And yes, I’d agree that monk fruit and stevia are far healthier than the yellow, pink, or blue, these options are less readily available.

The fact of the matter is the most commonly used artificial sweeteners are cost-effective for producers, inexpensive for consumers, and widely available. Also, for years, one of the big knocks to consuming diet products was the nasty aftertaste. This is no longer an issue, with products like Coke Zero on the market. There have been multiple taste tests where subjects, on a whole, were unable to consistently pick the artificially sweetened from the naturally sweetened Coca Cola beverage. That’s a far cry from the days when people were repulsed from diet options. Diet beverages, in particular, have become so good that even folks who aren’t watching their diets will choose it over the natural sugar options. But why? Who would pick a 0 calorie beverage over one that has 50, 100, or even 200 calories? Do people have a dependency to sugar or do they simply want what tastes good?

According to multiple sources, artificial sweeteners range from 180x – 13,000x sweeter than sugar. Imagine being so hooked to sugar-free products that when you have a cheat meal or a cheat day and you’re able to have the bad stuff, it’s actually not as good? Could artificial sugars alter our taste buds and if so, is the change temporary or permanent?

I’ve read numerous articles and watched dozens of videos on this very topic, over the years. I wasn’t even looking for information on this topic, it’s just been a major topic of conversation among gurus and diet conscious people online. Folks who consume a high number of sugar-free products have indicated taste issues that are similar to that of heavy smokers. Fruits and vegetables no longer taste the same, sugary items may not taste as sweet, and the body may begin to need foods flavored with the particular sugar alternative to be satiated. For example, if you swear by saccharine, you may find that aspartame and sucralose miss the mark considerably. You may also find that sugar isn’t suitable anymore. So what’s bad about that? With the exception of a gram of dextrose or maltodextrin here or there, consumers are essentially consuming calorie-free food. In fact, one popular store brand that I love, has a cute message on their bottles of diet pop; it states something to the effect of, drinking freely, this item has no calories. Well, you can drink freely if that’s your only concern, but are there health risks? That’s a whole other story. And we just don’t know the answer.

One group I’ve learned a great deal from are low carbers. There’s a reason Dr. Atkins and other advocates of this style of eating rely more on sugar alcohols than the Big 3 artificial sugars this article focuses on. For those leading a low carb lifestyle, their biggest fear is spiking insulin. Some of the more hardcore, refuse to ever go above 50g of carbs a day. That’s even low by bodybuilding/peak week standards. The reason why these folks are so rigid is because anything above 50g of sugar per day could kick them out of ketosis. They’re not interested in recharging glycogen stores by having a cheat meal, much less a cheat day, per week. Carbs are their mortal enemy. The same can be said about diabetics struggling with obesity. Carbs not only will get them fat, but they may kill them. So why don’t they rely on zero calorie, non-nutritive artificial sugars like aspartame, sucralose, or saccharin? Well, I can’t point to any studies or any factual data (probably because there isn’t much), but based on numerous commentaries from some of the most successful keto advocates on social media, the reluctance is based on the fact that while calorie-free sweeteners may not have calories, they may still cause an insulin reaction. That seems hard to believe considering there are no carbs to speak of, but these substances are so sweet, that they may effectively trick the body. So whether they have calories or not, they can totally undermine a keto diet and potentially a prep. Say what?

Yes!! In addition to all the articles and videos I’ve read, I know of coaches who would rather their clients indulge in a cheat meal or day, than to get hooked on artificial sweeteners. This includes sugar-free syrups and jellies, the closer they get to peak week. Again, if they have no calories, what’s the problem? The problem is, even without the calories, they can still trick the body. In fact, some extremely strict low carbers will also abstain from caffeine. Again, there’s no actual studies that I’m aware of that prove a nexus between caffeine and insulin responses, but there’s plenty of well respected influencers and gurus with plenty to say on the topic. I’d bet if I phoned my buddy Steve Blechman, the genius behind Muscular Development, that he could point me to a number of studies and scholarly journals, but even that being put aside, the fact is there’s also truth in influencers who interact with hundreds, if not thousands of people, actively finding their way through the diet process, largely using trial and error methods to figuring out their way to the finish line.

As someone who uses artificial sweeteners quite often, I’ve noticed that I no longer crave sugar nearly as much. Diet products have come a very long way and oftentimes, if I’m enjoying a cheat meal or a cheat day, I’ll ask for diet soda. If they’re out and they offer me the regular stuff, I’m almost disappointed. That’s just plain weird!! That being said, I think that unless these substances cause real health issues that they’re probably the lesser of two evils. The fact is, we know what obesity brings about. It causes heart disease, it can lead to adult onset diabetes, lower testosterone and deteriorate people’s quality of life. Millions of Americans also suffer with blood pressure, heart disease, back issues, not to mention psychological issues related to being overweight and out of shape. If sugar substitutes can help people feel somewhat normal insofar as what they eat and drink, while getting to a healthier place, health wise, that might not be the worst thing.

If, however, these sugar alternatives create lifelong habits, that might be a different story. We just don’t know enough about what could happen after 10, 20, or more years of constant use. I still remember the disclaimer put on saccharine back in the 80’s and 90’s. While those disclaimers are long gone, today, there must have been a reason they were plastered all over the place back then. Maybe the studies were eventually disproven, but they were, seemingly, valid at some point. Again, we just don’t know.

What’s your take on the Big 3 of artificial sweeteners, the other five, and sugar alcohols? Should we simply learn to diet without the fake stuff, is the fake stuff probably ok, or do we just cross our fingers and wing it? I look forward to reading your feedback. Happy Dieting – or – whatever it is you’re doing!

Newer Post
How to Make It Through Thanksgiving Without Weight Gain
Older Post
AARON SINGERMAN IS A RAT! | REDCON1 OWNER