Newer PostWhy You Should Use the Morning After Pill – No, Not THAT One
Older PostMaximize Carbohydrate Intake and Muscle Growth
Share on FacebookShare on TwitterShare on LinkedinShare on Pinterest 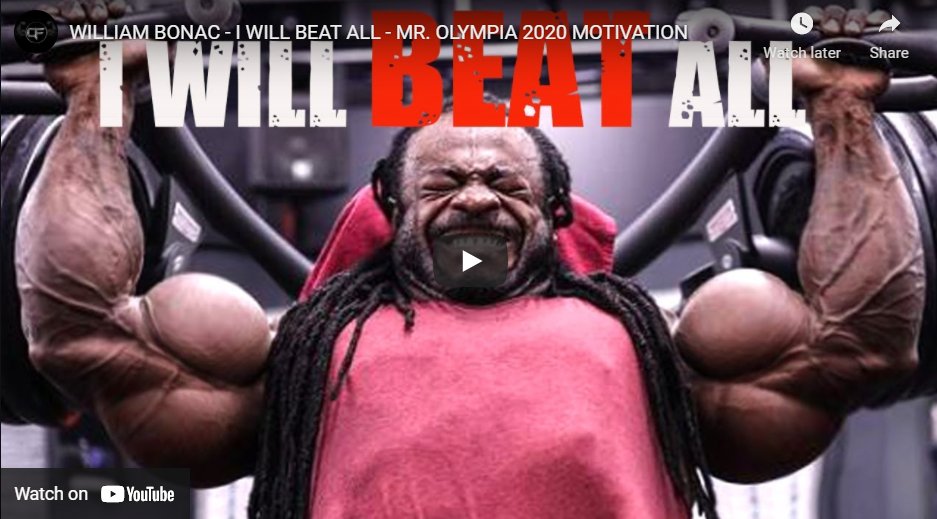 Let me start this article by saying a couple of three things. If you’re a Soprano’s fan, you’ll get that; if not, you’ll be like, “what did he just say?” Anyways, when we talk about bodybuilding and we talk about living legends, we’re talking about a very small club, especially when it comes to active competitors. Guys like Brandon Curry, Big Ramy, and Shawn Rhoden come to mind. You can most definitely add 7x Mr. Olympia Phil Heath to that category and you better not forget Arnold Classic champion William “The Conqueror” Bonac.

Sadly, after last year’s Olympia, I could see where many of you might not put Bonac in this category. He certainly brought an incredible physique, bigger and with more muscle, but he was all but ignored in the pre-Olympia promotions. This wasn’t because of anything William did or because of the quality of his physique, it was more so due to the fact that the event was themed along the idea of four Mr. Olympia champions all battling on one stage. Bonac just didn’t fit into that narrative.

In years prior, he’s always been considered a threat, and in 2019 he nearly won the Olympia. If you were to look at contest records, alone, no one would come close to him. You’ve got guys like Sergio, Justin Rodriguez, and Ian Valliere, who all have won key titles. Then you have guys like Akim Williams, who cracked the Top 6 at last year’s Mr. O (just 1 spot below William) and then you have a former Arnold champion in Cedric McMillan. Will Akim peak as hard in Columbus as he will in Orlando? Will Cedric in 2021 be anywhere near as sharp as the Cedric that won the title in 2017? Then, of course, you have real blue collar guys like Maxx Charles. Although we’ve seen stronger lineups, this will be a very competitive lineup and one that I think Bonac should win, and here’s why.

Hype means nothing. Bonac has always been under the radar so whether or not RXMuscle, MD, or Youtubers show him love, it’s not going to matter. Speaking of YouTube, who can forget the disrespect Bonac had to endure at the hands of Luimarco. Back then, that troll was the biggest guy on the video-sharing app. Today, most people have long forgotten his name. Meanwhile, Bonac remains at the top of the sport. Whether he’s trending or not, doesn’t matter. He was also able to move on from his longtime, superstar coach, continuing to maintain himself amongst the elite of the elite. While the pundits may dissent, I’m of the belief that Bonac can beat anyone. He can beat Brandon (nearly did in 2019), he can beat Ramy, and he can beat Phil. The only flaw he has, isn’t really a flaw at all. He’s short, but since when is bodybuilding a tall man’s sport? He’s also smaller, being that he was a former 212 competitor. Nonetheless, as of 2020, he’s proven that he can play the size game too, nailing a Top 5 finish in 2020 and an Olympia qualification. So wait, if he’s already qualified for the big dance, why is he doing the Arnold?

Well, the 2021 Arnold won’t qualify you for the 2021 Olympia, but even if it did, Bonac doesn’t need it. I think his decision to compete will have more to do with personal pride than anything else. While the prize money is huge, despite the event not having an expo, The Conqueror needs to reassert himself as a top guy. In my eyes, he will always be that, but I think a part of him wants to reclaim his title and wants to push that win in the faces of all the talking heads who maybe have outgrown him.

Listen, Big Ramy is the champ, and everyone should look to him. Brandon was the 2020 Mr. O and he deserves a huge amount of attention, as well. Beyond that, no other guy should really be outshining Bonac – though they are. You have guys who have only won $10k shows and/or who have big IG accounts getting more press than an Olympia runner-up and Arnold champion. Since when is that ok? It really isn’t, but the fitness industry press doesn’t, typically, cover athletes based on the quality of their physiques, contest records, or chances of winning; they care more about hits, more than anything else. The reality is that a big win in Columbus, this September, may be just what the doctor ordered. Depending on how Bonac comes and how decisive the win is, I could see a lot of outlets getting on the bandwagon and pushing The Conqueror hard for the Olympia.

The bigger question, as far as I’m concerned, is would William even do the Olympia after a big win in Columbus? I have always said that bodybuilding is a thinking person’s sport. Perhaps, a great strategy would be to make a different kind of history. So we know the 2021 Arnold is set for September and we know the 2022 Arnold is set for the normal time in early March for 2022. Could you imagine the kind of hype Bonac would create, if he won in September, skipped The O, and then won again in March?!?! Imagine going into the 2022 Mr. Olympia with two Arnold titles to your name. Not only would he have a boatload of cash, but who in their right mind would overlook him? Further, he would create so much buzz by NOT doing the O, that whoever won it, would be automatically compared to him on the various message boards. And yes, I’d be remiss if I didn’t bring that up too!!

Message boards were lagging for a bit, but they’re back. MD’s have a new protocol to weed out spammers, IronMag forums have never missed a beat, and Facebook groups are evolving more and more into becoming mini-boards, with their Room features. Other threads, like those at GetBig, have also never missed a beat and even the somewhat abandoned boards at RxMuscle are seeing some life again. After all, what do most people discuss on these platforms? They talk about women, gear, and virtual comparisons. If Bonac wins two Arnold’s – back to back – he’ll be on everyone’s radar. So while a top guy doesn’t need buzz and buzz means nothing on the scorecards, it’s still something that’s desirable.

What do you think? Will Bonac win it all? Will Columbus be a preview of Orlando? Could we see William win twice and skip the O?