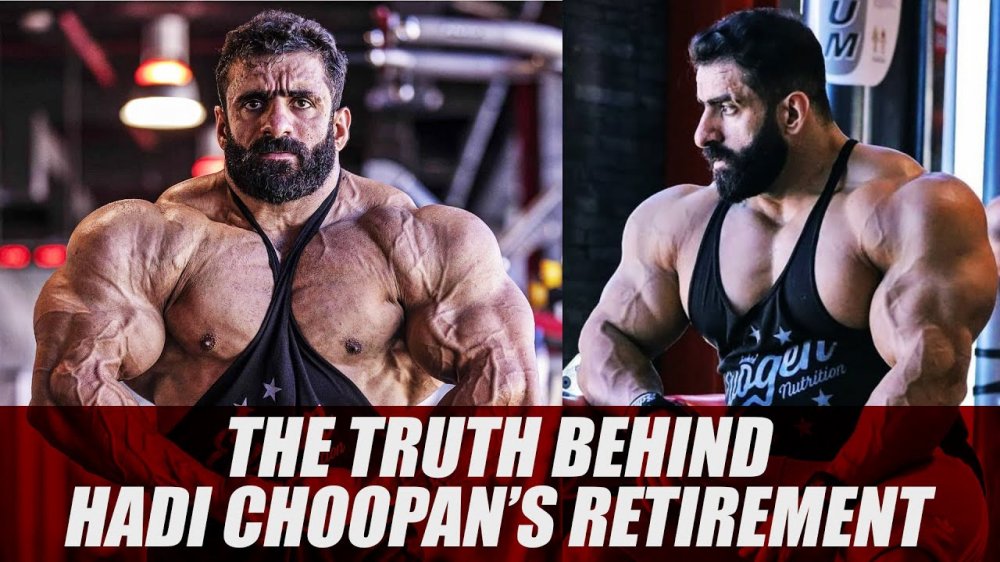 The world of bodybuilding and fitness became unglued when news of Hadi Choopans’ farewell video went viral. His fans just couldn’t understand why. Here you have a champion who’s finally where he wants to be, both in terms of placings, as well as popularity, but he wants out? He works with a legendary coach, in Hany Rambod, has a huge sponsor in Evogen, and he’s able to compete at the Olympia. He could probably compete in more countries, once things with Covid 19 normalize; however, as most of the other top Olympians are making announcements starting their preps, The Persian Wolf is giving an exit speech? Or is he?

There’s a lot of different factors at play here. The media may not want to concede many of these points, largely, because they may not work in their favor. Once a story develops, people just love the snowball effect, especially when it’s before the contest season has really kicked off. Under normal circumstances, the Arnold Classic would have just happened, the pundits would be comparing its top finishers against last year’s Olympia Top 6, and we’d have to endure prediction after prediction by all the talking heads. Instead, it looks like the Arnold won’t happen until September and the pro season won’t kick off for another couple of months. Without much going on, bodybuilding news outlets picked up on this video and have descended on it like a pack of crows. While there’s no denying Hadi had some things he needed to get off his chest, there are few people in our sport who can speak Farsi. In fact, speaking it, alone, may not be enough. To truly understand contexts, I’d think someone would have to be fluent. The rebuttal to that, are that Iranian websites that have landed at the same conclusion as us – Hadi is out! But how is this possible?

For bodybuilders in the West, it’s abundantly clear that you have to hustle. Bodybuilding is not an Olympic sport – and may never become one. There are instances where international athletes who brought back medals from the World Games and/or Universe, would get some fanfare. In some cases, governments might allocate some resources, the media would cover them, and curious fans mobbed them at airports. The curiosity was largely a product of the novelty of it all, but I can assure you that bodybuilders were never treated like football (soccer) players, baseball stars, or gravity-defying basketball athletes. That was never the case and any bodybuilder who spins that yarn, has allowed nostalgia to cloud their recollections.

One salient point in Hadi’s speech was funding. He wasn’t upset with the sport, rather, he was saddened that his beloved country of Iran didn’t see the value in all his efforts. Here he is, competing on the most prestigious physique-based stage in the world, draped in the Iranian flag, and doing so well, that he was considered a top pick to win it all. Surely, that kind of PR is what the Islamic nation could only hope for. To a lot of people, Iran’s public image is one that’s largely associated with international interference (see Lebanon, Syria, Iraq), others still have memories about the Iran Hostage Crisis of the late 1970’s, and some need only read any newspaper or news-gathering website, today, to see, that when it comes to threats to our country, Iran ranks high. Now, flip the script, to see a humble man, battling against giants, and gracious in his placings. That could have really been something.

Not to get all Dennis Rodman on you, but sports can influence foreign policy. While everyone expected The Worm to change over fifty years of hatred with a few basketball games, he has accomplished a great deal. Whenever you can find common ground between two adversaries, you call that progress. I don’t think either country saw it, or cared, for that matter, but to those of us who follow the sport, we couldn’t help but notice. 2019 was big, as was 2020, but did Choopan get enough? Did he see the kind of remuneration for his efforts that he expected? I mean, we see him in Evogen shirts, but do we know how much the supplement company is paying him? We see him in the gym, training with different workout partners, but does he own the gyms – or – is he just there for a workout? What’s life like for him in Iran? Does the whole neighborhood join him for a jog, like in the Rocky movie? With the exception of showing his bodybuilding physique, what if Choopan’s life was largely uneventful? What if his whole day consisted of trips to the gym and back home, pushing through workout after workout without the fine dining, fast cars, big houses and private jets?

Wait, who lives like that, everyday? Any day? The cold, hard truth, is that most big-name bodybuilders don’t have a pot to piss in or a place to drop dead. The fans eat up the magazine spreads and take the bragging of fitness celebs as gospel. Fans rarely, if ever, question their idols. The problem is when amateurs go pro and/or earn their first pro victories and evaluate what they have to show for it. Many have this “that’s it?” look on their faces. They’re so proud and so happy to have won, meanwhile, they can’t believe there’s no pot of gold at the end of the rainbow.

I’ve seen Pro’s win a contest, only to get a check for $2,000. What do you do with that? That barely pays your air, hotel, and meals. You’ve spent $5-10k on a prep, to “win” 20% back? And then you go back home. Are there tv, radio, or newspaper people blowing up your phone? Is the gym pressing you to showcase your hardware at the front desk. Surely you’ll be able to get a workout done in peace, but you have a huge suspicion that people from all over the gym will stop dead in their tracks, when the victorious pro walks in; it’ll be so quiet they’ll be able to hear a pin drop. Then the day and time comes, the victorious pro walks in, and the gym clerk wants to read his temp just like everyone else and he’ll be lucky to get a wink or a nod in the whole place. Bodybuilding is still very much a niche sport. I hate to break it to you, but while the sport has grown, it still has only a cult following. Most people at the gym don’t know about bodybuilding – and don’t care.

In America and the rest of the West, many fitness stars know what they can and can’t accomplish. There’s ambition, optimism, and reality. Everything in life, from diets to training to outlook, needs to strike a balance. While there are exceptions, the most successful pro’s, will tell you that at the end of the day, they’re pragmatists. Most pros have several income streams, all legitimate, that include competition earnings, personal training, modeling and working for sponsors. These guys are able to make great lives for themselves and the really successful ones, either go on to own their own businesses or invest into others.

The idea that a pro could make that same kind of money because they represent a country in overseas competition and train while wearing a supplement company t-shirt, might be a tough sell. Also, today’s bodybuilding market is not yesteryear’s. It’s becoming harder and harder to get people to believe that legal supplements, consisting of amino acids, whey protein, and caffeine can get a person to look like Hadi Choopan, Big Ramy, or others. No one cares how pure the whey may be or what your training program is called, the net has given many people, even the clueless add-on fans the ability to distinguish natty from enhanced gains. The truth is, the athletes deserve a lot more money, provided they work for it. If Hadi were hitting 20,30, or 50 countries, then maybe so, but just training from a gym in Iran, I don’t know. Maybe Evogen pays him really well, and maybe they don’t; I just know that times have dramatically changed.

I, personally, don’t think Hadi is bidding us farewell. He’s already tasted stardom, he knows he can win the Olympia, and he knows that he can really build from this. He may not be where he wants to be, but he’s made leaps and strides in terms of his physique, placings, and he’s successfully transitioned to the ultra-competitive Open Division. Not only did he hang with the big boys, but in both 2019 and 2020, he was considered a major contender for the title.

Do you think Hadi is really leaving the sport – or – is he bluffing? This could be a tactic aimed at getting a reaction from his government. That might work with a small, peaceful country like Costa Rica or Switzerland, but I don’t know that that would be my approach with a country like Iran. There’s the chance the huge PR miss dawns on them and they rush to Hadi, money-in-hand, begging him to reconsider. There’s also the chance his new calling will be making license plates.