Will Equate Cause Vegan Protein Chaos? 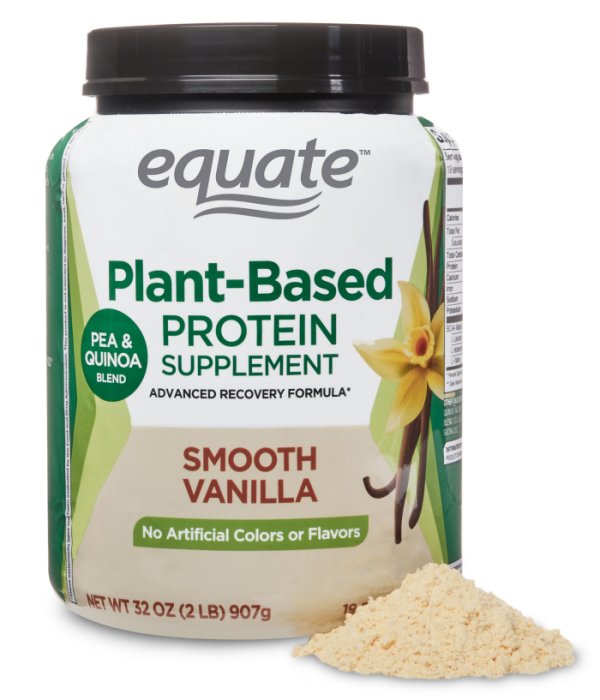 For those of you that don’t know, Equate is Walmart’s inhouse brand for vitamins and supplements. Over the years, they’ve expanded the number of products they carry. You can find their vitamins, minerals, and complexes, but you can also see an emboldening presence in the fitness supplements market.

Once upon a time, BodyFortress was seen by many as “the Walmart Protein,” for two glaring reasons. The first reason was that Walmart carried huge selections of the line, with every flavor imaginable. The second reason was the fact that Body Fortress presented huge savings and Walmart offered the best prices on the already value-priced line. For years, BodyFortress wreaked havoc on giant supplement companies that just couldn’t compete. When BodyFortress started appearing at fitness expos, going all out on massive booths, and advertising in bodybuilding magazines, then the companies saw the writing on the wall. Companies like MuscleTech, even launched their own discount line, in Six Star Nutrition. For years, the battle for the value bodybuilding clientele was entirely a two company fight – BodyFortress vs Six Star.

Over time, more companies started appearing on Walmart shelves in the supplements aisle. Now mind you, twenty years ago, there may have been half a dozen brands, each with maybe 1-2 products. At best, fitness supplements might have been a small section of an aisle. Today, it’s a packed aisle. I predict that at the rate Walmart is going, they’ll have two full aisles of fitness supplements in another 5-10 years.

Rite Aid tried doing this twenty years ago, by putting in mini GNC’s (4-6 aisles) in each store. This model sounded great on paper, but simply didn’t translate when put into practice. The problem with that model for Rite Aid, was that they had to abide by all GNC rules, price points, and limited selections. Walmart isn’t hosting a small supplement store within their store, they’re simply offering shelf space to companies that jump through all the hoops they require of them. These are huge companies that have a track record of performance in the fitness industry.

Some of these companies have sold on Walmart.com for years, but to make it to Walmart shelves, creates a huge level of demand and profitability that they simply cannot pass up. Also, unlike many failed supplement retail giants, Walmart will not keep products that don’t sell on their shelves – they don’t have to. Therefore, customers get an overload of deals that don’t require them to shop at any specific times, sign up for gold cards, or buy with arbitrary limits. With all that being said, I’m confident Walmart gathered a huge level of product knowledge, buying trends, and performance analytics over the many years they acted as a retailer of big-brand fitness supplements. Walmart isn’t just a retailer though, they’re very much manufacturers as well. Equate just might be Walmart’s secret weapon in the discount fitness supplements game.

Equate will do to Body Fortress, what Body Fortress did to the giant supplement companies a decade ago. It’s far cheaper than both BodyFortress and Six Star, but also gets key placement on Walmart shelves and end caps because it’s the house brand. Initially, as with any company, the labeling was basic, and the strong emphasis was placed on price. Over the course of just a year or two, Equate’s presentation got better and better. Their latest design is clean, very sleek, and very innovative. People look at the packaging and remark at how sharp it looks.

The way a product appears can be every bit as important as how it helps the athlete perform. Remember, a lot of people eat with their eyes. No matter how delicious a dish may be, it has to look good. Supplement companies have spent endless time and resources on focus groups, surveys, and studying consumer trends within the microcosm of bodybuilding and fitness. For a long time, Equate’s bottom dollar prices just weren’t enough. People would be surprised to see Walmart actively in the game and the super low price point, but the branding of slightly more expensive (discount) brands like BodyFortress and Six Star) looked cooler. Consumers would rather spend just a couple bucks more, for the visual. Now that Equate has bounced back with better labels, they no longer disappear into the sea of silver letters, holograms, and other bells and whistles that tantalize buyers’ eyes when in the fitness supplements aisle.

Equate’s Plant-Based Protein is pretty delicious. I bought a tub on Thursday at Walmart and as of Friday I had 7 scoops. Each serving is 2 scoops, providing 30g protein, with only 1g sugar, and only 1g saturated fat. It’s sweetened with maltodextrin and sucralose, but doesn’t have an ingredient list as long as my sleeve. In fact, with only 9 ingredients, it’s very well put together and tastes absolutely amazing.

All seven scoops I consumed, were not in shakes, rather, I had sludge. That’s right, just two scoops and some ice water, and I had the most delicious, filling protein pudding, ever!! If i was to freeze it, I bet you it would have the consistency of soft serve ice cream. In fact, as I write this article, I’m getting hungrier as we speak. But with regards to Equate’s vegan protein powder, I have to say, I’m thoroughly impressed, and I can’t say I try much vegan protein. I’ve been a lacto-ovo vegetarian since the age of 14, but I’m not vegan. Veganism is actually quite different, but then again, these vegan proteins are being consumed by a far wider range of people than simply those who consume plant-based diets.

Animal-free proteins powders, meat alternative patties, and lactose-free shakes and baked goods are soaring. A few years ago, we saw a similar movement with gluten-free items, but even that, was a fraction of what we’re seeing with the plant based revolution. Huge restaurant chains, like Burger King and White Castle, don’t just have plant-based burger patties, but they actually have different kinds of vegan-friendly burgers. Supplement companies have tried getting on this market trend for years. About a dozen years ago, Ultimate Nutrition had a delicious Wheat Isolate Protein. You could get 50 servings for $20 at GNC. That was 50 servings at the same amount of protein as the whey, egg, and soy variants. The problem then, is that vegan proteins were only consumed by vegans – it wasn’t the hip thing to do for say, meat eaters.

The vegan protein section of the fitness industry has always been very small. Only a handful of companies could compete, consistently, in national and international markets. Because there were so few companies, prices were controlled, and everyone kept theirs high. Buying a 2lb tub of vegan protein powder cost more than twice the cost of one of premium whey protein. Using vegan protein powder was perhaps the biggest ripoff on the planet, but there was no competition.

All the vegan companies charged pretty much the same. With Equate hitting the market, with a great tasting, properly marketed 2lb tub of plant-based protein at $15, what are companies selling less weight in their tubs, with largely the same ingredients and macros, for as much as $35 more going to do? Who’s going to buy at those outrageous prices?

To date, Equate is the only company that has done this in the vegan/vegetarian sector. What’s interesting, however, is if Equate’s Plant-Based powder tastes better than its competitors’, that will likely seal the deal. Could you imagine if Equate’s product tasted better, had better macros, and cost way less? I suspect that that’s exactly what’s going to happen and like with anything else, if the demand is there, Walmart will meet it. I could see them going all out with plant-based protein cookies, chips, shots & more!!

Another trend to consider is the fitness industry’s own take on the mainstream trends. As is often the case, fads in the mainstream have a second run as fads in the fitness industry. Although we have seen veganism in the bodybuilding world before, it’s never been anything quite like this. Plant-based proteins are now finding their way to the actual fitness community. Walmart has jumped in at the perfect time. Who knows, if Equate sells strongly enough, Walmart may even start having Equate booths at major fitness expos, following the lead of BodyFortress a decade ago. That could have all sorts of implications on the muscle supplements market.

In fact, more companies could start coming out with vegan options, creating a whole new section in the industry. Whatever happens though, the few companies that used to dominate the vegan sector, charging whatever they all more or less agreed to, will have some serious soul searching to do. Their old ways just won’t cut it today. They’ll either have to adapt or close their doors. Very few people will pay inflated rates for the same ingredients – provided they taste as good. Some companies in the vegan sector charge those inflated rates for the same ingredients and taste like total trash. Those guys definitely have their days on top, numbered.

What say you? What’s next for Equate, plant-based supplements, and how will these products perform in the ever-competitive fitness industry? We’ve seen Kai Greene do a vegan phase, we’ve seen the benefits outlined in plant-based supplements, and the fact you can use them and reap the benefits without having to go vegan. It used to be that vegan supplements were only bought by vegans, but now folks who do eat meat, but may have to reduce their weight or cholesterol are using them, as well. Equate might really be onto something!