What Happened to Roelly? Will He Qualify for the Olympia? 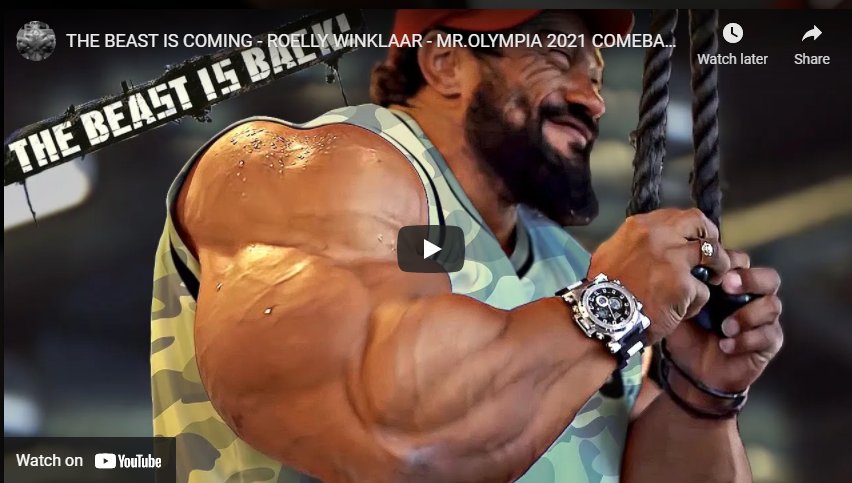 Without actually being there, it’s hard to say what happened at the Chicago Pro. Obviously, the pictures are all over the internet, and mouths dropped once again when Hunter Labrada stepped out on the stage. But the big shocker of the show is probably Roelly Winklaar. I mean, what happened? We are talking about a Top 5 bodybuilder at the Olympia barely squeezing into the Top 5 at the Chicago Pro!

The Olympia is quickly approaching, and after Roelly wasn’t able to make the 2020 Olympia due to testing positive for COVID, could his 2021 chances also be slim? It may be too early to tell with a few more Olympia qualifiers to go before the big dance, but the question needs to be asked.

Can Roelly Even Get to the 2021 Olympia?

First off, I’m a big fan of Roelly. I think the dude is hilarious, and any time you see him, he’s joking around and making people laugh. That’s exactly what we need in the sport right now. I think the guy has one of the craziest physiques we’ve seen in a long time, and obviously, the fans love him up on stage. However, we haven’t seen a whole lot of Roelly, and with his showing in Chicago, it makes you wonder if he can pull it together to make the trip to Orlando this year.

I’m not about to downplay the physiques that were at the Chicago Pro. When you look at the guys who placed in front of Roelly, such as Hunter, Brett Wilkin, Maxx Charles, and Mohamad Shaaban, they brought it. But at the same time, not a single one of those competitors was anywhere close to the Top 5 at any Olympia. Hunter placed 8th at the 2020 Olympia, which was a fantastic showing considering it was his first time on the Olympia stage. I predict that Hunter has a great chance of placing even better at this year’s Olympia.

But what I’m getting at is the fact that Roelly couldn’t even beat the four men standing in front of him at in the Chicago Pro. What happened? Could all this time off have set him back? Going into the 2020 Olympia, we saw images of Roelly where he looked drastically downsized, but his conditioning was absolutely bonkers. Everyone thought it could be the year that Roelly contends for the title – but, unfortunately, that never happened as he got stuck (due to testing positive) during his travels to come over to the states.

If Roelly can’t beat guys who never even placed well at the Olympia, how is he going to beat Big Ramy, Brandon Curry, Hadi Choopan, William Bonac, Phil Heath (if he returns to the Olympia stage), and you can toss Hunter Labrada’s name in there too now? Roelly has a lot of room to make up if he’s planning on heading to the 2021 Olympia in Orlando.

Roelly has his eyes set on the upcoming Tampa Pro, but even then, he’s going to find himself in the middle of a pretty good lineup again, especially with another monster like Iain Valliere stepping into the show.

Roelly has always been an overly muscular bodybuilder. It didn’t matter who he stood next to, he was a solid block of muscle. He dwarfed many men he stood next to. But the one thing that always held him back was his conditioning.

Sure, from an overall mass standpoint, he was leaps and bounds ahead of many competitors, but that doesn’t mean anything if your conditioning is off. Sure, it’s fun to see a freak walk on stage, but when his body is his business, and he needs to place well in order to take home any type of money, his conditioning needs to be on point.

A couple of years ago, we witnessed a change in Roelly’s physique. He started to work more on his midsection – a pain point of almost his entire professional career. Again, Roelly was a massive bodybuilder, but as soon as he relaxed his midsection, you’d think his water was going to break any second. And it wasn’t just Roelly who had distention issues, but that was one of the main negative focal points that people looked at with his physique.

With more work, which he confirmed he was putting in, Roelly’s midsection really improved. So much so that he could hit a vacuum pose, which most Men’s Open competitors can only dream about hitting. At that point, Roelly’s conditioning was getting tighter, his 3D look was becoming even more pronounced, but even then, he wasn’t placing well at the Olympia.

However, at the Chicago Pro, Roelly simply didn’t hit his mark. As the show progressed, he lost his hardness, he started to look flatter and softer with each pose, and by the end of the show, it was clear that Roelly had faded… A LOT.

Frustrated must be an understatement for what Roelly is feeling right now. Where does he go from here with his physique? Obviously, he needs to maintain his conditioning at shows, which he didn’t accomplish in Chicago. But what else does he need to do in order to win over the judges and edge out the other bodybuilders on stage? You’d normally say it’s time to go back to the drawing board, but with so many changes to Roelly’s physique over the years, what’s really left for him to change?

It’ll be interesting to see how Roelly does at the Tampa Pro and if he can edge out the other competitors and punch his ticket to the 2021 Olympia. What do you think? Can Roelly make it to this year’s Olympia?