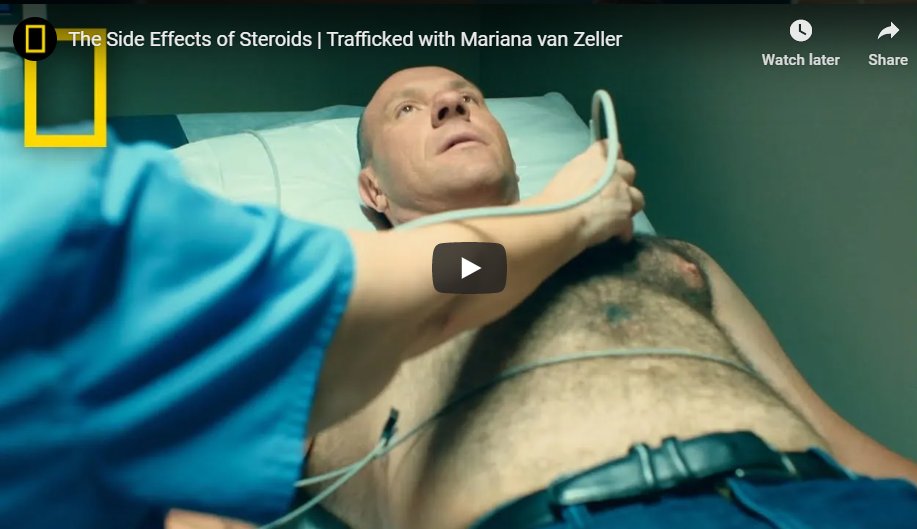 The title of this article is just one of many choice phrases used in this new National Geographic documentary “Trafficked – Takeaways: Steroids” all about Dr. Tony Huge. Yeah, I know he’s not a doctor, but he has a JD. He is not a medical doctor and a JD isn’t really a PHD, either, but it does have doctorate in the title. Anyways, no one actually thinks Huge is a doctor, it’s part of his schtick, and this documentary couldn’t help but feed on it, not even ten minutes in. That being said, don’t get it twisted, I love this documentary, from the naivety of the host, Martha Van Seller, to her fascination with Tony calling his athletes “guinea pigs,” to the soundtrack and special effects.

The lighting is absolutely pro. I’m sure of all things that might seem a little bizarre, but the lighting is absolutely amazing, but you’re not here to read about that. You want to know about the gray area, the taboo, and the downright risky. People often associate Tony with pretty reckless behavior, though, after watching this documentary, i think viewers will have a greater appreciation of just how well versed Tony and his crew are. Granted, I’m speaking of being well-versed in an underground capacity, but in the sport of bodybuilding, underground has been the way of the land for a very long, long time. I don’t condone it, but I’m aware of it.

Of all the films Tony has done, this one is my all time favorite. There’s a lot of perspectives in this documentary, going places no other documentary has. This has elements of the Undercover Pro (from the MuscleMag days), with aspects of Bigger, Stronger, Faster, and the host (while innocent) has an almost Ross Kemp like quality to her approach. She goes places most reporters wouldn’t, asks the questions few would, and you just know this is legit.

What I mean is, we’re all so seasoned with regards to fake reality tv programs that anything short of real, would be abundantly obvious. None of the content in this film is fake. None of the people appearing – from the athletes, their significant others, or their concerned parents – are hired actors. There’s a very real, very raw overall feel to this film. I’m writing this article as I’m watching it. As of now, I’m twenty minutes in.

Many of the people who appear in this film share the why – they started using performance enhancement drugs. We all know that once someone’s on gear it changes their lives. Although I’ve never been on, I’m at the age where it’s medically appropriate and something I’m very seriously considering. I’m not going to compete or be a fitness model, but I will eventually have my bloodwork done, go to a clinic, and get the therapies I need. But I don’t have to take exogenous hormones to know they work. I have interviewed hundreds, if not thousands, of competitive physique-based athletes. I know what these substances can do. I know they improve strength, recovery, and I know they improve emotional well being. Do they do this for all people? No. But they do it for enough people where I’ve come to expect it when speaking to athletes.

Further to that, I hear a lot of what people tell me in confidence, on a film for all to see. When you have athletes on gear being this level of honest, uninhibited, and downright blunt truth, it serves as a tremendous learning experience for the mainstream public. I think if someone who knew virtually nothing about what anabolic steroids do, what the risks involved are, and how they can change lives (for or worse), this film is absolutely eye-opening.

In one part of the film two guys, who are said to be Tony’s biggest fans, share their experience on gear. What’s troubling about this clip is that the two fans are teens and they don’t look unusually jacked. In fact, they look like your typical HS varsity football players. This film is objective; it’s not a film aimed at projecting Tony’s fame and fortune. In fact, at times, it takes a quite adversarial tone and the fact Tony and his camp participated, should speak volumes about them. Most gurus and/or social media personalities would never put themselves in a situation where an investigative journalist on the level of Van Zeller, would interview fans and critics, as well as grill the main star almost to the level of an attorney dealing with a hostile witness in court. The beauty, though, is that this host comes off as being very soft, though she’s as effective as a mountain lion.

“As long as Tony assures me I’m not going to die right away from this, then it’s ok.” That quote is as meathead as it gets. That quote in the bodybuilding world might get some chuckles, maybe even some accolades. Let’s be honest, the guy sounds insanely driven; he sounds hardcore af. And for what’s worth, he may have been acting for the camera a bit – shocker, eh? But if a soundbite like that hits social media or Capitol Hill, then you know it’s going to go viral.

That’s the kind of clip the out-of-touch geezers in the swamp like to play, it’s their mic drop conclusion to whatever witch hunt they’re carrying out against sports supplements. It’s a popcorn headline. I mean, check it out, this one quote has inspired an entire paragraph in my article. And, of course, the host is blown away by the transformation of the athlete In question, but she also is probably oblivious to the concept of peak week, drying out, the tanning and the lights, carbing up and so much more. She saw the athlete in the gym and then she saw him on stage. She can’t believe her eyes and in the process of being shocked, she also breaks down how a bodybuilding show works, the posing, and the judging criteria. The meathead looks great, there’s a build-up of suspense to the results, and Tony looks great calling out poses and assessing his physique backstage. Everyone wins. The host is totally clueless, but who knows if she really is or isn’t. You have to watch it and then leave a comment wherever you see this article posted.

I’m thirty-seven minutes in and Zach is being shot up. The sound effects and yes, the lighting, are pretty killer. The host is stunned. It’s like she just saw Jesus. There’s vials and syringes, there’s shop talk, and there’s a lot of compounds being discussed. Vivian is preparing rice, Tony’s videographer is on the job, and the host rattles off all the many possible side effects. It’s a rollercoaster ride. And we haven’t even mentioned the veterinary steroids.

I love how the host asserts they’re not for human consumption and that she wants to see Zach do well, but she doesn’t want to see him die. That’s classic. I totally smiled. I hope Zach doesn’t die, either, for whatever it’s worth. There’s a lot of mention of The Olympia and the alphabet agencies. Everyone uses gear, but this is another sign this isn’t a cookie cutter film. The host does mention the rules and asks the athlete if he’s worried. If Tony’s not worried, he’s not worried. It’s the competitive mindset to the max, that’s hardcore af. I don’t condone it, but I’m speaking to the general consensus, to the mentality of a subculture which on its best day is a niche that hopes not to be ignored by the mainstream. Films like these will command more notoriety. The muscle, alone, won’t make the sport the household name some wish it will one day be. How do I know? Well, it hasn’t done the trick in seventy years, so I don’t see muscle, alone, breaking the industry big in 2020 and beyond.

Forty-four minutes in, I find out that 4,000,000 Americans use gear and I hear The Anabolic Doc warn the world, that whoever leads this kind of lifestyle, “their day will come.” While that may be ominous, the warning is real. This documentary isn’t about guys running 200mg of test as part of TRT, it’s about guys hitting it hard.These guys are wanting to push the envelope, they want to be superhuman, they want to be evolved beings. For as great as that sounds, The Anabolic Doc insisting the day will come, may have a lot of truth to it. Ultimately, it all goes back to Tony’s belief in people being Pioneers of Freedom. Each person decides what’s best for themselves. As long as they don’t hurt anyone else, they should be able to weigh the pro’s and con’s, decide accordingly, and live with the consequences. As I said, out of all the films I’ve seen of Tony, this is the one I like the most.

I highly encourage you to check it out. I, for one, think very highly of Tony. That doesn’t mean I agree on everything with him, but I do recognize all of his hard work, what he’s achieved on social media, and how committed he is to core values like personal freedoms and living the absolute highest quality of life, attainable. What’s your take on this documentary?