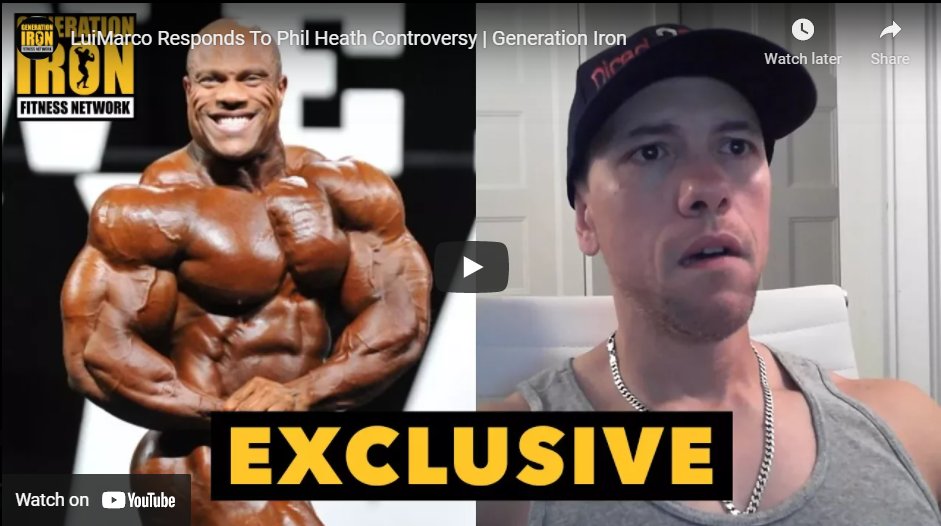 Luimarco, the L.U.I…, who can forget that character? He hated me, hated Gregg Valentino, and wouldn’t do an interview with Ron Harris because Gregg and I both had weekly shows at MD. Lui did an interview with Dave Palumbo of RxMuscle, only to erase it because he found Dave to curse too much and that didn’t sit well with his principles. Then he went and did an interview at a small outlet, known for its raunchy content, but go figure.

Lui also wanted to have William Bonac arrested because William got angry with him. I guess in some countries speaking angrily is a crime. The outspoken Youtuber also enjoyed picking on 7x Mr. Olympia Phil Heath, going after his alleged bubble gut. Yes Lui was something else alright. At the height of his reign he landed a deal with Redcon1, started making public appearances, but he wanted more. Unlike other Youtubers who had plenty of time, his days were more or less numbered, as he was in his 40’s and his schtick was fading towards the end of his run. As long as he was DIY, against the grain, and marched to the beat of his own drum, then he would be ok, but he simply couldn’t stay small potatoes.

Once you’re in the limelight, you never want to leave. The attention is addicting and if you’re the type who loves the sound of his own voice, then it’s cake. Sadly, Lui wasn’t a veteran of the fitness industry press and couldn’t see what was happening. In fact, he was never truly accepted. To most, he was just a wannabe Lonnie Teper with an internet connection and a thick foreign accent. In the end, it was the mistakes he made while on top, that would eventually bring about his demise.

Luimarco wasn’t supposed to get famous. Nothing about him commanded fan interest. He was a lanky guy who built a great natural physique. But a o what? Tons of guys and gals do that. His initial style could be summed up as gear-shaming (shaming those who are enhanced), trolling, and talking into his webcam. He didn’t have a green screen, there was no lighting to speak of, and he didn’t have a mic, either.

The guy was a minimalist and people took to that. Unlike other channels that invested in glitzy intros, with hosts wearing expensive threads and driving fast cars (they prolly rented), Lui didn’t care for any of that. That all changed with the Redcon deal and with the public appearances. He went from looking down at outlets that covered contests, to all but begging promoters to give him the time of day. He went from being critically objective of the pro’s, to having favorites. If he liked you, he’d push you hard. If he disliked you, he’d make it a point to tear you down, limb by limb, depending on how bad the adversity was. In all honesty, that’s the modus operandi of most journalists, but Lui was supposed to be above all that. He wasn’t. He was just like everybody else and when people started to pick up on that, they started looking to other channels.

One decision that really hurt Lui, was his decision to take a break from YouTube. Within a year from the passing of Rich Piana and Dallas McCarver, YouTube started to change the way it looked at certain subjects. At least that’s the vibe many content creators got. In fact, many bodybuilding videos which had always been fully monetized, were now only monetized to limited audiences. Instead of a video getting a green dollar sign beside it (full monetization status), the yellow dollar signs (limited audiences) started popping up everywhere, on all channels. Many creators said they were done, others said they’d release far less and/or tried to have their subscribers watch through paid options. By this point Lui was clearing a nice chunk of change in Adsense revenue. Adsense is Google’s revenue generating program for channels. When things were starting to come unhinged and channels started dying off, this could have been a great opportunity for Lui to rally the people, to bring about calm, and to make it clear he wasn’t going anywhere. Instead Lui took a break that would end up crushing his popularity, and if that weren’t bad enough, he all but gave his followers to Nick Miller (Nick Strength & Power).

Lui had become so popular and so powerful as a result of that popularity, that he probably thought he could take the hiatus and pawn off his supporters on this young kid making videos out of his garage. He probably figured that when AdSense went back to normal and the mainstream media heat on bodybuilding cooled off, he could just come back and reclaim his old glory. Well…, Nick got his own Redcon deal, he took Lui’s fans and they never left his side, and when Lui looked to Nick for support, he found none. It’s one thing to have a protege, but when you empower that protege, give them the keys to the kingdom, it’s unlikely they’ll give them back. I mean, I normally don’t side with Nick, but could you blame him? Lui just left, so Nick did everything in his power to follow in his teacher’s footsteps and maybe do it better.

Whereas Lui was mysterious about his actual subscriber count, Nick has always shared that information with the world. No one ever knew how popular Lui actually was, but you could see his hit counts and that was enough to make your jaw drop. Nonetheless, Lui’s actual sub count has been said to have been around 350,000 at its height. As of today, Nick’s more than triples that. Both guys were DIY, both guys worked with RC1, and both guys were/are essentially trolls. Furthermore, bodybuilding isn’t that big of a sport where Lui’s 350k supporters and Nick’s 1 million are different people.

Sometimes, reality is exactly as it seems. Lui’s followers became disenchanted with him, they were sore he left them, and Nick’s channel absorbed them. That’s a valuable lesson any social media star and/or influencer should take to heart. No matter how jacked you are, how funny you are, or how much of a trendsetter you are, if you don’t treat your audience correctly – they will leave you, like most of Luimarco’s did.

Do you still watch The L.U.I.? Do you think he’ll ever regain his old glory?

Newer Post
NAC Supplements Get Banned by the FDA?
Older Post
Is Bodybuilding a Hyper-Critical Sport to Be a Fan?