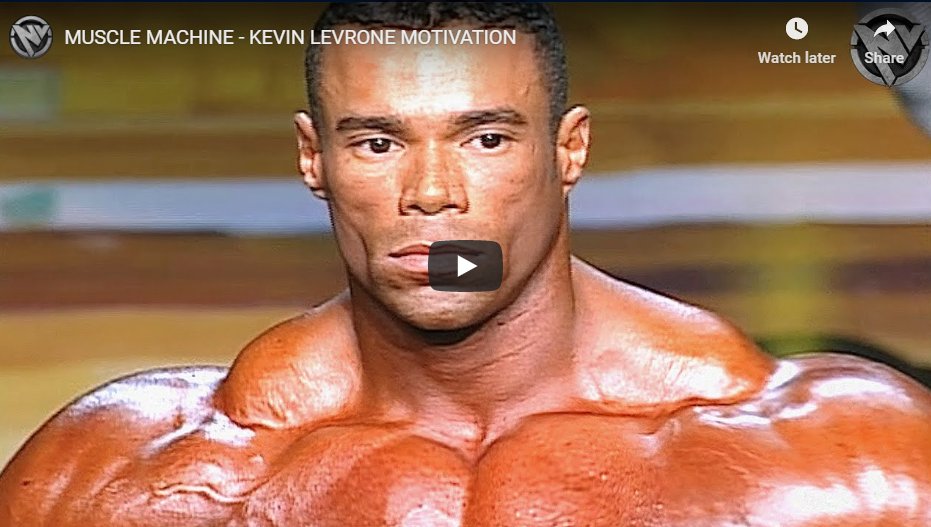 Bodybuilding fans throughout the world know the name Kevin Levrone. When they think of him they think of a great time in the sport of bodybuilding. The 1990’s was a cutting-edge era in the sport. It was a continuation to a decade where the sport was looking to find itself. The 80’s started with familiar faces making comebacks, with Arnold winning in 1980 and Franco in 1981. It wasn’t either bodybuilder’s best, but it was good enough to add titles to their already impressive resumes. In 1982 the sport saw the victory of Chris Dickerson and in 1983 a big win by The Lion of Lebanon, Samir Bannout. By 1984, the Totally Awesome Lee Haney won his first contest and would remain solidly in place until 1991. No other Mr. Olympia had won eight in a row and this run was packed full of exciting battles.

Towards the end of Haney’s career, a young bodybuilder was just getting started. In fact, the last year Haney won, was the year that Kevin Levrone turned pro, winning the Overall at the 1991 NPC Nationals. Yates’ first year, winning the Olympia, saw Levrone win a string of contests, as well as the prestigious Night Of Champions. By 1992, Levrone also known as The Maryland Muscle Machine, was runner-up to Yates and the rest is history. From them on, Kevin would always be in the mix, for whatever contest he entered, but particularly the Mr. Olympia. Whether he was battling Dorian Yates or Ronnie Coleman, Levrone made his presence known, making both reigning champions dig deep and battle to the wire, to keep him from toppling them. And although this was way before internet being mainstream, and even way before the social media, word of mouth spread like wildfire. People read the articles in the magazines and they bought the DVD’s. It was a well known fact that Levrone ate a certain way, trained a certain way, and had a general work ethic and spirit about him. People identified with him, they looked up to him, and they supported him – every step of the way.

Kevin Levrone’s starpower stayed the course. Most guys who take a ten year absence are all but forgotten, but no one ever stopped talking about Levrone. All those years he was pursuing his music and acting career, hardcore fans couldn’t stop talking about his many big wins and hard fought battles. In many ways, I’d compare Kevin’s starpower with to that of Kai Greene. And what’s wrong with pursuing other talents? For a lot of bodybuilders, this is all they’ve got. It’s a great talent, be sure of that, but with others, there’s other interests they want to pursue. If you’ve spent the better part of a decade chasing one elusive title, then why not try your hand at other dreams? And by dry your hand, I don’t mean in piecemeal fashion. For music, you need to give it your all acting as well.

Who remembers Full Blown, that was a really great band. They had a really tight rhythm section, guitars were on point, and the singer wasn’t half bad, either. In all seriousness, with the correct management and label support, this band could have had a string of Top 40 hits. I say that as an avid music fan and having interviewed a good number of musicians in what seems another life ago. That being said, the music business is about as demanding as the bodybuilding stage.

The life of a full-time musician is as demanding as that of a business tycoon. When not playing shows, there’s promo that needs to be done (interviews, in-stores, brainstorming lyrics and music, constantly reassessing song structure, then tracking. Branding is another mountain endeavor. Sure, you could leave it to the record label, but why not push even harder? Back in the days we’re talking about, the record industry was still very much a thing. Today, the whole burden of breaking a band, almost falls on the shoulders of its members. There’s only so many hours in the day, so if Kevin wanted to see what the band could really do, he couldn’t do it while being a full time bodybuilder, especially not at the level he was at. The same goes for acting.

Contrary to what many may have thought – then and now – there aren’t a lot of casting calls for guys with a Top 6 Olympia physique. Oftentimes, guys with this look might get beat up in fight scenes, work as extras, or become stunt people. The idea that a jacked bodybuilder at 240lbs, and 3% body fat would land a leading role in a properly funded film – then or now – is hard to believe. If we’re talking B movies and/or shorts, then maybe so, but Kevin embarked on a blockbuster acting career. He totally transformed his physique, and took that on 100%.

While gaining muscle is hard work, I’ve heard that losing it is even worse!! Kevin shed the muscle, but stayed lean, looking like a totally different person. If he was going to try his hand at acting, he was all in. Now, believe it or not, the music and acting gigs, actually enhanced his fan base and earned him even more respect from his bodybuilding base.

Real fans want to see the people they love, doing real things. Of course, a bodybuilding fan would prefer to see their stars stay in the contest mix; however, they like to see them spread their wings and fly, as well. I mean look at Arnold. All those years he was acting in major motion films and even holding elected office, that grew bodybuilding. So, too, with Kevin and Kai, everything these guys have done to enhance their resumes, has propelled them to greater stardom, as well as helped the sport. Something else that helped Kevin, was his 2018 comeback.

A lot of critics will say that a comeback can hurt an athlete’s legacy. They will say that it’s best for the fans to remember champions when they were great. What’s the point of coming back, if the end goal isn’t winning the contest? Many of the people making such statements don’t go to shows and don’t understand the sport. Winning contests is only a small part of a journey. Not everyone can win and those who dominated eras prior, have already done that. It’s not to say they couldn’t win again, but I hardly doubt that’s what gets them out of bed in the morning. Once you’ve been the best at something, I think that creates a certain level of self-confidence and really helps a person to see the bigger picture. When Kevin said he’d return to the stage and accepted a special invite from NPC President Jim Manion, it wasn’t about winning the Olympia, it was about making a commitment to return to the sport he knew and loved, doing it for the fans. That’s the same reason other legends returned, like The Sultan of Symmetry, Flex Wheeler, returned.

When Kevin made the commitment to come back, that’s just what he did, despite horrible pain in his knees. As he got bigger, more and more immersed in the training, and pounding the calories in, he was also in agony. Towards the middle and end of his Olympia prep, Levrone started sharing videos of the painful medical procedures he was having to endure. His knees were drained, he was in discomfort, but he stayed the course. It would have been so easy, so understandable for him to have pulled the plug. No one would have been upset; in fact, many of his detractors were taking bets on how long he could go on. They wanted him to pull out; not only because of the pain he was enduring, but also because they desperately wanted to be right. The second Kevin announced a comeback, you had trolls near and far, from faceless losers on message boards to big names in the sport, throwing water on the whole thing. They discounted it as a publicity stunt aimed at selling supplements or services. Regardless of what placing Kevin got, he made a decision, gave his word, and he was there.

Today, Levrone hasn’t said he’s coming back, but some of his recent posts have certainly gotten people’s attention, sparking conversations, and news reports. I didn’t break the story, but I definitely want to add my insights in an article for Iron Magazine. While Kevin may just be posting on social media, the fact he’s stated his knees are 100% and given some footage of his recent training, people are going to speculate. Further to that, Kevin also seems to be holding onto a nice amount of size. There’s no doubt he might just be enjoying life, looking big, getting stronger, and feeling 100% healthy, but if he decided to throw his hat into the 2021 contest season, that would certainly be interesting. Anyone who thinks that a 100% Kevin Levrone, able to eat, train, and prep in peace, isn’t a threat, is nuts!!

The one major con he had to his physique in 2018, was the fact that his legs weren’t there. Well, when your knees are being drained and compromising your leg workouts and now that problem is off the table, it definitely makes you wonder. Everyone remarked how good his upper body was, so now, who’s to say what he could accomplish? Perhaps 2021 will allow Levrone to put together the comeback physique he had envisioned. At 100%, regardless of age, The Maryland Muscle Machine could make plenty of jaws drop and get the judges excited. Don’t ever forget that!!!

This is actually the perfect time for a Levrone comeback. Most shows won’t start till summer, The Arnold is moved to September, and who knows when and/or where The Olympia will be. This is the first year without Dexter, it’s also a year with two Mr. Olympia’s getting ready for a rematch, meanwhile who knows what Phil Heath will be doing. Will we ever see Shawn Rhoden back on stage? There’s so much going on, so many rising stars, and you put all that after one of the most chaotic years in history. Will 2021 be more of the same? Will Flex Lewis compete in the Open? Will Kevin Levrone do a pro show, do The Arnold, or try to get back on the Mr. Olympia stage? The fans, and I’m definitely one of them, would be absolutely in heaven!!

For now, it’s just a couple social media posts, but everyone’s hanging on Kevin’s every word. The question is, will he give us some insights or will he play the Kai Game. I never know what Kai Greene is going to do, which gets old after a while, but I’ve never stopped caring. Hype is a big tool in any marketing plan. Why? Because it works!! Take the great coverage by Desktop Bodybuilding or the article you find yourself reading. That’s just the beginning. That being said, Kevin has never been one to employ this angle just to sell supplements. His brand sells very well and his starpower is completely carved in stone. Therefore, I’m less inclined to dismiss this as smoke and more inclined to believing that Kevin is either going to come back – or – he’s seriously considering it. Either way, I’m on the edge of my seat – as I’m sure you are too. :)

What’s your take on a possible Kevin Levrone comeback in 2021? Do you think it’s plausible?