“Thank You For Supporting Brandon, So Much.” 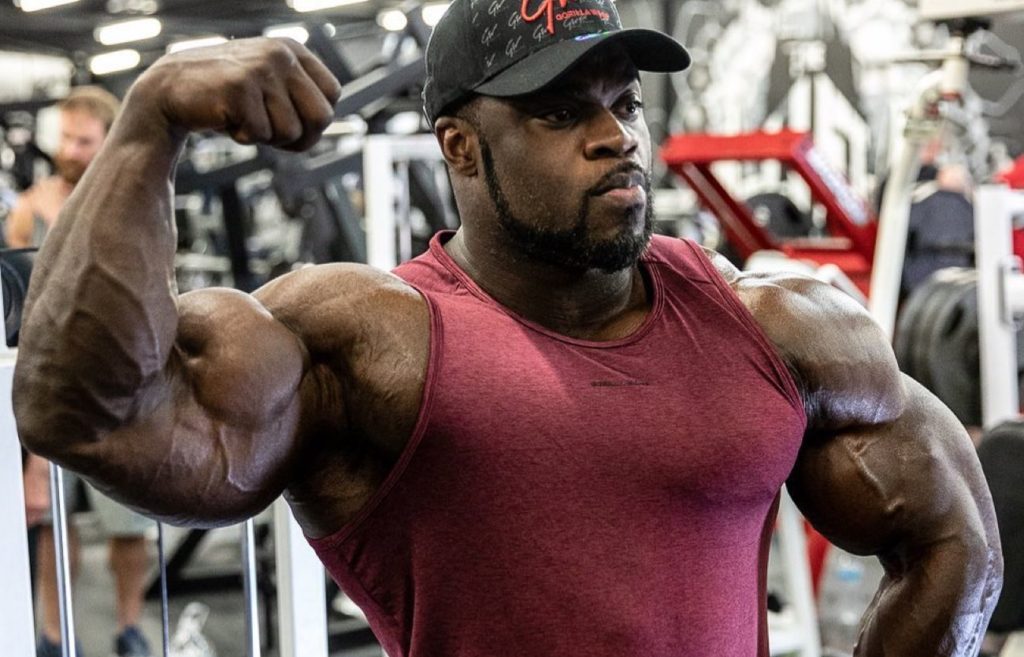 Almost every week since the 2020 Mr. Olympia I’ve thought about this brief exchange between myself and one of my favorite Mr. Olympias of all time, #14 Shawn “Flexatron” Rhoden. Picture it! It’s moments after the contest, I’d just interviewed new 212 Mr. Olympia, The Giant Killer, Shaun Clarida. I was in high spirits and Ramy and Brandon came out. I was debating asking Ramy for an interview, but I wasn’t wild about the way he got into the contest and made my position quite public.

While I don’t have the audiences of Nick’s Strength & Power – or even rising stars like Desktop Bodybuilding – what I say makes the rounds. I have worked very hard over the years to earn the attention of key people in the industry. Some like me, some don’t, and some just want to keep tabs on my comings and goings. In any event, I thought I’d feel like an absolute hypocrite if I approached the new Mr. O and tried to pretend I was happy he just beat another one of my favorite Mr. O’s, #15, Brandon Curry.

In any event, as Ramy was being congratulated by a few people, Brandon and his entourage strolled by. I said hello to him, Brandy, and before you knew it, there was Chris Aceto and Shawn Rhoden. I was just standing there showing Curry support and hanging with Ron Harris, Hector Mendoza, and BIG Mike Cox of Muscular Development when a conversation with Shawn started up. It quickly went from the basic greetings, to Rhoden taking me aside, putting his hand on my shoulder, and saying “thank you for supporting Brandon, so much.” It was a real moment because, to me, it was like when William Bonac went public, urging his fans to recognize Brandon as the legitimate winner of the Arnold Classic in 2019. I thought this was such a beautiful thing that Shawn did. I was his fan, but when he was sidelined, I found another great hero to support. He liked that. This is what bodybuilding is all about.

I love the guys I support. Everyone knows I’m a huge fan of guys like Rhoden, Curry, Bonac and Winklaar. There’s a few others, but when I say few, I mean so few I could count on my other hand. I like many, many competitors, but I’m forty-two years old; I’m also highly-educated – both in academics and life. It takes a lot for me to say I believe in someone. I believe in the guys I mentioned because they’ve proven to be role models in the sport. They’ve come up the ranks through hard work, cutting their teeth with tough placings, listening to the judges, and improving over time. I don’t think much of competitors who are so genetically-gifted and so well placed that they’re able to reach the top with relative ease. While a win is a win on paper, I’m more about how you get there. If you’ve tasted adversity, if you’ve questioned yourself, but in the end you find your path, that’ s something countless people can relate to. Guys like Shawn, Brandon, William and Roelly all paid their dues, they all rose to the top through years and years of hard work, and they’ve earned the love and respect of fans such as myself. Shawn taking the time to thank me for showing his successor support, says so much about him and it also says a great deal about how my heroes helped shape the direction of the sport. It went from a very dog eat dog mentality to being about camaraderie and mutual respect. 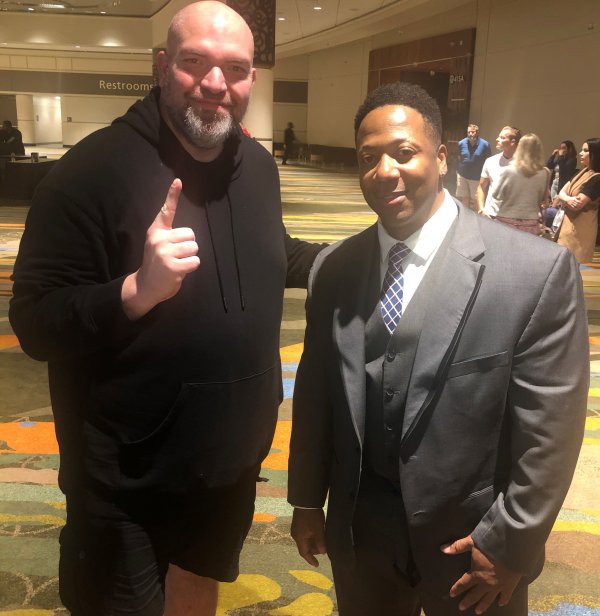 Athletes don’t decide contests; they don’t fill in the score cards. It makes absolutely no sense for athletes to tear each other down. When competitors are at each other’s throats, it’s either a product of media outlets and/or fans creating strife – or – it’s a pitiful attempt by one or both parties, looking to get on the radar. The best way to get noticed in the industry is by finding your own way, and sticking to your guns. It’s about doing good things for others, whether it’s philanthropy or simply being the voice of reason among your peers. More often than not, though, we see big names involved in internet dramas, then those battles make their way to the message boards, Facebook groups, and the various interactive apps – from Reddit to Instagram. Then what you have is a giant snowball effect. The fans get riled up, the clickbait media has a smorgasbord of toxic stories they can run, and sometimes even supplement companies join the mix. That sort of activity doesn’t grow the sport. It may entertain the trolls and it may seem like there’s a lot going on, but that’s a really bad look.

The real path towards growing fitness is showcasing positivity, showing the world what the human body is capable of, and what the human mind can do, as well. I don’t care how hard you train, how rigidly you diet, and what supplements you take – if your mind’s not in the game, you’re not going to excel. Rhoden knows all about that from being runner-up (and uncrowned Mr. O) in 2016, to the pitfalls of real life in 2017. When you’re #2, you expect to either stay at that spot or, hopefully, win the the next year. Then you get injured, your flight gets cancelled, or you get a pandemic virus like Roelly did last year, and things just don’t work out. The way Roelly looked last year – he may very well have beaten EVERYONE on the Olympia stage. He was THAT GOOD!! Did he quit? Not all; in fact, he hit the contest circuit with a vengeance in 2021. That’s what you call being a great bodybuilder. That’s what Shawn Rhoden is.

How many guys can stand in the sidelines, not be able to defend their title, but still go to the contests and thank his fans for supporting another competitor? He literally watched Brandon win his title in 2019, then he saw Ramy do the same the following year, but guess what, he’s at the contest, he’s supporting the sport, and he’s not disappearing. The Olympia is his home.

I remember a certain scene, quite, vividly, back at the 2019 Pittsburgh Pro. I remember four guys chopping it up, hanging and laughing like old friends. I mean, they were old friends, but it was as if a huge black cloud over the athletes had been lifted. Shawn was about to start his prep for the first defense of his title and he was joined by 2008 Mr. Olympia Dexter “The Blade” Jackson, Roelly Winklaar, and 2019 Arnold Classic Champion Brandon Curry. They were all having fun, talking to fans, and getting along great. If you could only see it, you would have felt the electricity. As a fan of bodybuilding, it just didn’t get any better than that. Any one of those three could have beaten Shawn in just a few months in Las Vegas, but that was the farthest thing from any of their minds. They were enjoying the time together and their bond was unbreakable. When you think about it, these guys have gone through so much together. No one, but them, knows just how much sacrifice it takes to be at this elite level of bodybuilding. That’s something that creates lifelong bonds.

For a long time, Open Bodybuilding lacked the camaraderie of The 212. Men’s Physique has always been a bit of a brawl waiting to happen and I don’t know enough about Classic to speak on it. The Women, on the flipside, are all pretty united – across the divisions. In many ways, the top guy in bodybuilding is the shot caller. If you have a Mr. Olympia that has a certain kind of look, then that becomes the look to strive for. If you have a Mr. O that’s adversarial, hypothetically speaking…, then there’s going to be an antagonistic climate among the competitors.

Rhoden changed all that and Curry carried the torch. And Ramy, to a lesser extent, also kept the camaraderie going. I say to a lesser extent because he’s a far less vocal and a less active champion. You can give him a pass because of Covid, the language barrier, or because he’s from abroad, but at some point, even Ramy fans must admit, their guy is a throwback to the Dorian Yates style of Mr. Olympia, when it comes to interacting with the fans, working with the media, and influencing the sport on a day-to-day basis. It’s not a bad thing, but it’s certainly not going to grow bodybuilding, either.

In closing, I wanted to give #14, Shawn Rhoden a huge shoutout, almost a year after the fact. You can tell that this very kind, very noble gesture has made a lasting impression on me. It’s like he just said it yesterday. It’ll probably feel that way for the rest of my life. Love ya, champ!

Newer Post
Should You Be Worried About Your Water pH Levels?
Older Post
Bodybuilder Says He Wants to F*ck an Ashtray — Bizarre!