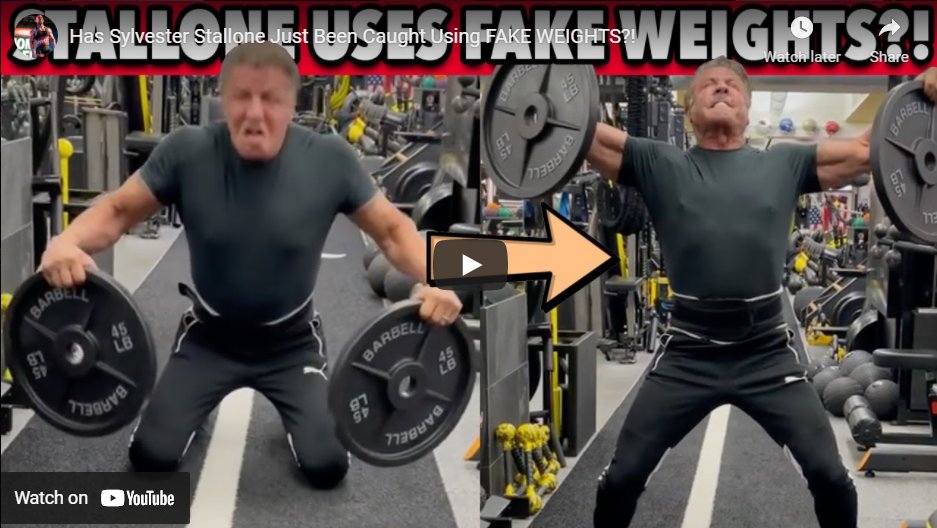 What? I mean, seriously, how could Sylvester Stallone, one of the most celebrated movie stars in the history of modern cinema, find himself in a situation where the entire fitness industry is accusing him of using fake weights on a recent video that went viral?!?!

Sly wasn’t kidding around. He wasn’t acting – well, he was – but he wasn’t acting for fun. Here you have the star of Rocky and Rambo, on his knees, holding a 45lb plate in each hand, getting up like nothing, and rising to his feet, holding these heavy plates as if they were feathers. Doing this kind of feat, you’d think his forearms were covered in veins, sweat poured off his face, and you’d think he was in utter agony – but none of the above was the case. He was in a fresh t-shirt, no sweat, no veins, no struggle – no nothing.

Sly’s video people were also lightning fast to cut the video before the plates hit the ground. Did Sly learn nothing from Brad Castleberry? I mean why on Earth would he try to perpetuate such a fraud over people who eat, breathe, and dream – training? Did he think we’d buy it? Does he think making videos like this will help launch a brand (he used to have a good one), sell movie tickets, or grow his audience? The truth is, that video did nothing for Sly, except make him look stupid. No one is amused and most people who have something to say, sound off at being insulted. To release a video like that says a lot. He must think that the bodybuilding community is nothing more than a mob of mindless lunkheads. From the moment the video was published, a number of major bodybuilding stars have taken Rocky Balboa to task.

Legendary Canadian bodybuilder Greg Doucette was one of the first to publicly knock Sly off his high horse. In a video that’s broken 1,000,000 views, Doucette tried to carry out the feat of strength Stallone did so effortlessly on his own. Greg was unable to do so with the 45lb plates, the 35lb plates, and was barely able to do it with the 25lbs plates. He pointed out concerns with the center of gravity and how Sly was positioned. He also raised a concern many of us were thinking – Doucette is a Pro athlete, 30 years Sly’s junior, and accustomed to training heavy in the gym. The fact Greg had so much trouble, suggests Stallone is full of it. It’s one thing if Doucette had used theories and formulas, but he actually tried to do exactly what Stallone purported to – from the exact position, to the exact grip, to the exact conditions. Since Doucette’s video, others have weighed in, but to date we have not heard from Sly. It’s possible he’ll try to sue, but the best defense to defamation is the truth. There’s no way Sly was using real weight and there’s no way he could do what he claims he could with real weights, anyways. So why did he do it? Why would he try to mess with people’s heads and potentially inspire others to try similar shenanigans?

Sly Stallone plays a boxer in movies, but he’s not a boxer in real life. He plays a soldier in movies – but to my knowledge he never served a day in his life. I know him and Arnold have always had a friendly rivalry. In the 80’s I don’t know how truly amicable it was, but they’re friends now. They’ve also been partners in Planet Hollywood forever and I’ll admit, I love both of their movies.

There was a time Stallone had a great supplement company – one product that I really remember was his chocolate pudding. It came in cans, held really well over time, and tasted delicious. It’s not too often you get to eat a high-protein dessert that can stand next to sugary ones and give them a run for their money.

Anyways, Sly always had a ripped physique, especially for movies, and no one’s denying the guy can throw a punch and move some weights; however, he’s not a bodybuilder and has never done a bodybuilding show. There’s something about the sport, though, that appeals to a lot of people. Look at Pro Wrestlers. They’re in front of way more people, make a ton more money, and have far longer careers, but MANY of them turn full-fanboy when they see Ronnie Coleman, Jay Cutler, or Kai Greene. Many emcee bodybuilding contests, some become promoters, and a select few, toy with the idea of competing. It’s like they have everything they want, but they are bitten by the bug. They could have an Emmy, a Tony, or even a Grammy on their mantle, but what they really want, more than anything else, is a $5 trophy and the bragging rights of winning a show so small, it wouldn’t fill up a section at one of the many arenas and stadiums they wrestle at, throughout the country and around the world. Ironic, huh?

Perhaps Sly wants to be a bodybuilder, too? More likely, though, is he probably wants to be a superstar in the fitness industry. The good news is, he already is. All he needs to do is walk into an expo and 99% of the people will know exactly who he is. For the 1% who maybe don’t, he can always tell them. But the fact is, I think Sly wants to be popular not for Rocky, Rambo, or Stop Or My Mom Will Shoot (lol); I think he wants to be popular in muscle circles for his strength. That could have been doable if he gradually got stronger and gradually got better at lifting major poundages, but to release a video like this, he’s now the butt of jokes. How does he – or his camp – do damage control? The guy basically made a fool out of himself and for those who were on the fence, all they need to do is watch Coach Greg’s video, and they’ll have their minds made up.

I honestly can’t figure it out. What does Sly have to gain from something like this? Maybe he thinks people will now look to him as being a strength coach? I honestly don’t know. When I first saw the video, I was expecting a punchline, a joke, anything to make sense out of the sheer insanity I was watching. When nothing of the sort came, my grin long gone, I actually got annoyed. I felt insulted that Stallone would try to pull such a stunt. If credibility is what he was after, he actually lost quite a bit of it. Instead of looking to him for guidance or wanting to use his products, this type of video will actually hurt his brands. Again, maybe this was a marketing team’s blunder – or – maybe it was all him. I couldn’t think of a situation where a video that’s so patently fake could help someone’s career.

What say you? Do you see any value to a video of a guy in his mid 70’s performing a feat of strength a pro bodybuilder in his prime, can’t? I think it’s pretty ridiculous and I would certainly cast it in the blunder category. That being said, what matters most, is what YOU, the loyal readers of Iron Magazine have to say. I hope you enjoyed reading my article, check out the attached video, and leave your feedback in the comments.