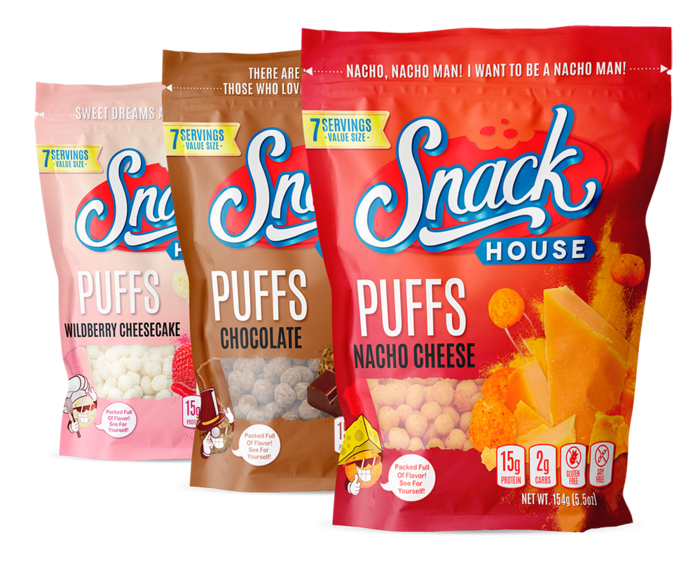 Shout out to all the parents out there who live a healthy lifestyle and try to teach their kids how to make smart, healthy choices when it comes to nutrition. I have a 6-year-old boy and twin 2-year-old boys, and to say they love protein couldn’t be any further from the truth. When speaking with other parents, it seems to be quite common that kids love carbs. Considering that over 40% of American adults are considered obese, the parents clearly like carbohydrates as much as their kids. Well, we both know you shouldn’t give your kids a diet made up of 100% carbs. So, what do you do? You try to find SOMETHING they will eat that has protein, right? That’s when I stumbled upon Snack House Puffs.

As mentioned above, kids LOVE carbs. That said, we at least know better than to have a diet that is made up of primarily carbohydrates and the health risks that can create (such as diabetes). When you think about it, kids eat whatever their parents give them, which give parents at least some control over what kids are putting in their body. Kids also mirror the behaviors of parents, which means they should look to be a good role model.

At the time of writing this article, there are currently nine flavors of the Snack House Puffs. Now, I will say this… not all of the flavors are necessarily “kid-friendly flavors.” For instance, cheeseburger, bar-b-que, garlic parmesan, and jalapeno cheddar will probably not be huge hits. However, the chocolate, wildberry cheesecake, nacho cheese, chocolate peanut butter, and independence cake should be a hit as they resemble sweet foods like candy and dessert, as well as one that resembles Doritos.

So, exactly how do you get kids to eat the Snack House Puffs? To be honest, I didn’t have to fight with my kids at all, and I don’t believe you will have any issues either. My kids eat many of them as a standalone product. For instance, the chocolate, chocolate peanut butter, wildberry cheesecake, and independence cake I put in a bowl, and they eat them plain with meals and even as a snack between meals.

It doesn’t end there, though. My kids will even eat them as cereal by pouring them in a bowl and adding milk. They also love the Snack House Puffs in yogurt. As an after-dinner snack, if my kids want ice cream, I sprinkle some of the Snack House Puffs on top, and they enjoy the flavor and crunch they get from the protein puffs.

What Makes Me Recommend Them to You (As a Parent or Not)?

For starters, I can say all of the flavors are amazing. I’ve used them as cereal, late-night snacks, croutons in salads, texture and crunch in Greek yogurt, as some protein and flavor in a plain bowl of oatmeal, and if you want to add some protein to a dessert (like cheesecake), you can toss on some chocolate, chocolate peanut butter, wildberry cheesecake, or independence cake Snack House Puffs.

It’s worth mentioning if you are looking for a keto-friendly option, Snack House Puffs is also sold as a keto cereal option. When I looked on their website, it shows “sold out,” so I’m not sure if it’s discontinued or simply out of stock. The reason I bring this up is that my kids love this as a morning bowl of cereal. The flavor is called “Fruity Puff,” which, in my opinion, is very similar to the taste of Fruity Pebbles cereal.

The brand as a whole is also quite fun. At the top of each bag is a little saying that differs from flavor to flavor. For instance, the cheeseburger flavor says, “I like big buns and I cannot lie!” while the independence cake says, “Give me liberty or give me cake!”

Overall, the profile is something you can be happy about. Each bag of Snack House Puffs contains seven servings. Each serving provides you with 15g of protein, around 2g of net carbs, is gluten-free, and is around 123 calories. You can buy Snack House Puffs in a value size bag or an 8-pack box. For my purposes as a parent, the standard seven servings basically gets doubled since I don’t give my kids a full service all at once.

You can find the Snack House Puffs on their website for $14.99 or over on Amazon if you are super excited and want fast two-day shipping to your doorstep via Amazon Prime.

In closing, what’s the bottom line? Would I truly recommend this product? Absolutely. There’s nothing I don’t like about Snack House Puffs, and I’ve been using them for about a year now (almost every day). The flavor is exactly like what the packaging says, and I really like the profile, not only for myself but my entire family.

Have you tried Snack House Puffs before? If so, what were your thoughts, and what flavor(s) did you try? Let us know down in the comments.