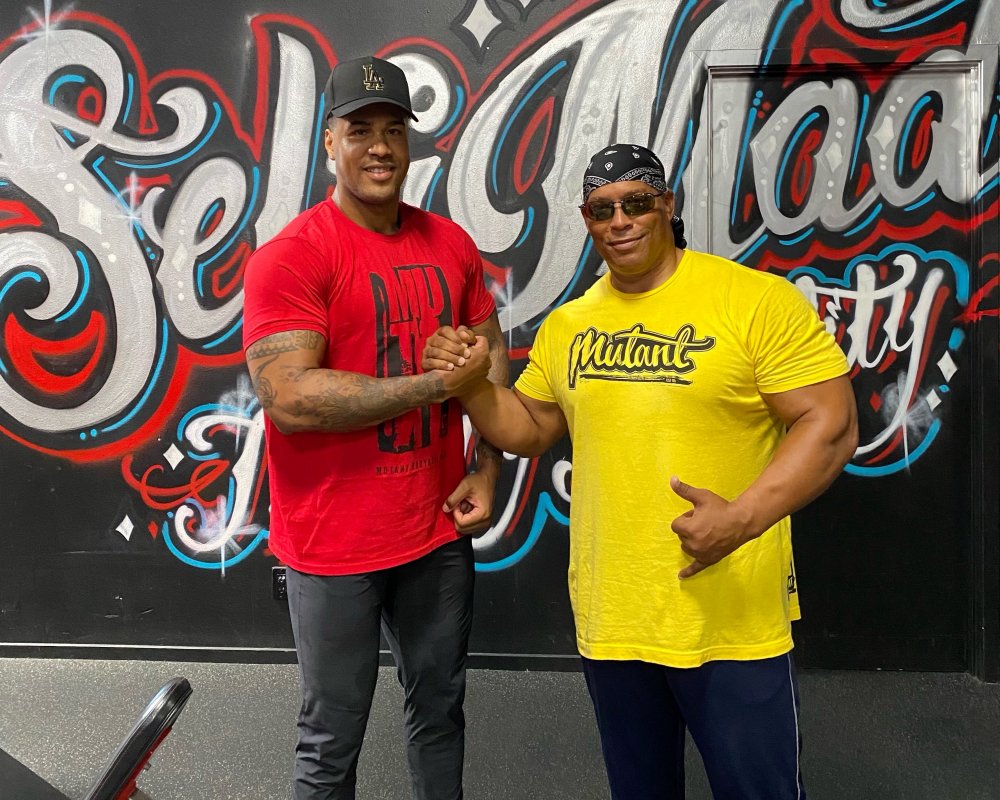 I like Shawn Ray. We started out as a bit of rivals on the Muscular Development forums, but that’s no shocker; we’re both highly opinionated people who say what we want, when we want, and how we want. We don’t really like censorship and we don’t see the point in kissing ass. If your work is good, it’ll speak for itself. Walking on your knees is simply not an option. However, in addition to being an opinionated and strong-principled individual, Shawn is also an IFBB Hall of Fame Bodybuilder, a Top Olympian, a contest emcee, media personality, promoter and more!!

That “more” encompasses a great deal, from working with a variety of projects, like overseeing Jake Wood’s Digital Muscle to sponsorships with a number of the industry’s most exclusive companies. In fact, today’s article is about Shawn becoming Mutant Nutrition’s ambassador to the world. Shawn told me about this huge partnership in the days prior to it going public; however, being as slammed as I am, I wanted to be sure I wrote this article with plenty of time to soul search and reflect.

In the meantime, excellent articles were penned by Kevin Grech of EvolutionOfBodybuilding.net and Natural Mr. Olympia John Hansen. This article certainly finds itself in good company. And to be honest, there will be many more articles and videos to come, as Shawn Ray’s fans become more aware of the big signing. The fact is, you have fitness celebrities who are big for a few months, a few years, and those who are very much legends. Shawn Ray isn’t a legend because he’s in the Hall of Fame or because of his social media following, it’s a totality of all of his many achievements. This is a guy who’s always been on top – it’s the story of his life.

Imagine a life where wherever you go, you get mobbed. Throngs of screaming fans lose their minds, wanting autographs, photos, and to pick the champion’s mind! How many times do you think Shawn has been asked how to gain muscle, how much protein he eats, or what’s the key to being successful on stage? It takes a consummate professional to make fans feel special, even if their questions get a little lame.

You have to love what you do and you have to show people respect. Many of today’s pro’s, I’m afraid to say, are clock-watchers. They don’t want to be there; some don’t even like to train. I can think of many other, far less demanding, paths to stardom than bodybuilding, but for some it’s just a temporary thing. The fans can tell, almost immediately, who’s full of it and who’s real. Fans, in general, can read through bullshit, but bodybuilding fans have the sharpest instincts of all. Perhaps, it’s because our sport is an underground one, or maybe it’s because our industry is full of fast-talking snake oil salespeople. Who knows? The bottom line is, “Sugar” Shawn Ray has long passed the test and continues to do so worldwide.

It may seem hard to believe in the States and Europe, but there’s still plenty of unchartered waters in the world. There’s places where the only interaction with bodybuilding has been through the movie Pumping Iron and that’s only because it stars Arnold Schwarzenegger. The actual sport in the film is secondary to the lives and interactions of the cast members.

Interestingly, some of the virgin countries in question, have great resources, from top notch venues, to well to do potential customers, and fantastic training facilities. In other words, there’s plenty of money to be made, and for companies like Mutant Nutrition, they will strike gold with a real deal bodybuilding legend like Shawn Ray. They’re getting a huge amount of value for whatever it is they’re paying him. I won’t speculate as to dollars and cents, but I know my man, Shawn, and I know he knows what he’s worth and what he brings to the table. Unlike many of his contemporaries who may appear to be livin large (while subsisting on little more than cat food), Shawn wrote the book on making good deals and planning ahead. When you’re financially stable and you live life on your own terms, you’re able to study deals thoroughly before signing on the dotted line. I think this is a good partnership for both parties; both sides will mutually benefit.

Mutant has the reach and name-brand recognition to push hard, especially into new markets. They also have a history in really building people up. Let’s not forget that this is the company who put Rich Piana on the map. Before Mutant, Rich was a second rate national-level bodybuilder, without most of his tats, and practically no following. I don’t want to credit Mutant with him striking it big, alone, but they certainly were an early driving force. In fact, when Rich split and started Love It, Kill It, his booth just so happened to be kitty korner from Mutant’s at the Arnold. Maybe that was coincidence – or – maybe being close to Mutant was a good thing. The split seemed to have been amicable and the company moved forward to many more victories, proving that its place on top, didn’t depend on a single athlete or a single product. And they have continued to be a driving force in the industry ever since! That, too, impresses existing consumers and potential new ones. Remember, the fitness industry pie isn’t getting any bigger and everyone wants a slice!! Every year, more and more companies go to market, and many crash and burn, even before the ink on their articles of incorporation dry. It’s a dog eat dog world, but the best always rise to the top.

As 2021 brings us closer and closer to normalcy, the post-Covid world is starting to look brighter than ever. It’ll be very interesting to see what Shawn can do for Mutant as the contest season approaches scorches on all summer long. The Fall brings massive events, too!!

The Arnold Classic is said to have one of the greatest lineups of all time!! Although it won’t have its signature expo, the event will draw a who’s who to Columbus, OH, and I know Shawn will be there, especially because he won the title, twice. I mean, once… (Lol). And shortly thereafter, there’s the Superbowl of Bodybuilding, the 2021 Mr. Olympia, where Shawn is a driving force in the planning and execution, not to mention up on stage as co-emcee with Bob Cicherillo. The fact is, Shawn Ray continues to set the bar higher and higher, he continues to grow, and he’s tried to help others along the way. His help isn’t charity, though; if he can make money with you, he will, but that’s a far cry from giving a man a fish. That’s a key distinction.

All in all, I’m very happy to see what Shawn has been able to achieve. I think what he’s doing is also very significant for competitors who are literally petrified of their life after the stage. Ray has not only been able to continue his success into retirement, but he’s been able to reinvent himself and stay current and relevant. That’s very important for pro’s who feel clueless as to what life in retirement will be like. Yes, Shawn retired from the stage, but he’s probably working, now, more than ever before. The stage and the titles are fantastic foundations for what’s to come.

Competitors don’t need to compete into their 50’s unless they want to. Money can and will be made once you hang up the trunks, you just need a good role model. And I can’t think of a better one, than Sugar Shawn Ray!