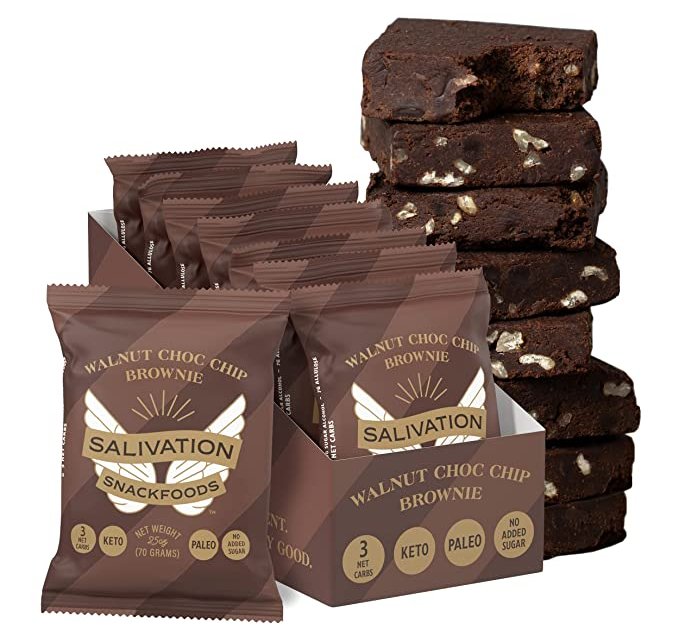 For starters, I get that I’m a little bit slow, so bear with me here. I found these Salivation Snack Foods Brownies and (well, I love brownies), and for the first 24 hours, I thought they were called “Salvation Snack Foods.” The packaging has what appears to be wings and a halo, and apparently, I can’t read — so, there’s that. Heck, maybe you read it the same way I did at first without giving it a second thought? Either way, let’s keep moving forward here.

Back in the day when I worked at MET-Rx, I was eating a MET-Rx Big 100 Colossal Brownie just about every day as a snack. Mind you, those dang things were slammed with 300 calories, 8g of fat, 34g of carbs, 18g of sugar alcohol, and 24g of protein. If you were looking to stay regular and prevent yourself from getting backed up, those brownies would do the trick.

What I like about the Salivation Snack Foods Brownies is the profile. They claim that their brownies only have 3 net carbs. Sure, the protein content is nowhere near what other protein brownies are on the market, but using these as a snack fits the bill. The Salivation Snack Foods Brownies come in three flavors — dark chocolate brownie, macadamia nut brownie, and walnut choc chip brownie (my favorite). I had a hard pass on grabbing the macadamia nut flavor (I’m not a fan of anything with macadamia nuts in it), but I picked up the other two flavors to try.

The profiles on the brownies are fairly similar, with minor changes coming from what’s inside the brownie, such as macadamia nuts, walnuts, etc.

Looking at the Salivation Snack Foods Walnut Choc Chip Brownie, you’re looking at 250 calories, 23g of fat, 25g of carbs, 5g of fiber, 1g of sugar, 10g of sugar alcohol, and 8g of protein. Mind you, I should point out that these bars are geared for those who follow a ketogenic or paleo-style nutrition plan. Therefore, you’re going to have a higher fat content in these brownies, and as mentioned, they claim 3 net carbs per bar. That said, these Salivation Snack Foods Brownies are gluten-free, contain no added sugar or artificial sweeteners, and utilizes collagen and MCT oil.

While these bars will fit in nicely with someone who follows a paleo or keto diet, I’m not sure people outside of those cults will be interested in these Salivation Snack Foods Brownies. That’s not to say they aren’t good or that someone can’t buy them, but most people I come across who are not keto or paleo prefer a “healthy” snack to contain, well… more protein. Also, I don’t believe Salivation Snack Foods is really pushing these for the protein aspect, but rather a snack option that fits a keto or paleo diet.

My Thoughts and Opinion on the Brownies (Taste)

When I got the Salivation Snack Foods Brownies in the mail, I didn’t want to eat them right away as I knew they probably melted slightly from being exposed to the elements, so I gave them a few days to “chill” in my office. Just feeling the brownies upon arrival, they seemed VERY mushy, which either meant the brownies are really soft normally, or they were merely soft due to the exposure to heat during transport.

After a few days in my office, I ripped them open to give them a try. I’m a sucker for walnut brownies, so I immediately took a bite out of the walnut choc chip brownie. As much as I don’t really enjoy keto or paleo products (I think most taste horrible), these brownies were frickin’ amazing! They were super soft, had a nice brownie texture to them, and the flavor was on point.

Usually, I devour everything but decided to save some for my wife and oldest son to try (he’s seven) and get their feedback (they’re brutally honest and being in the industry so long, I feel like I could eat anything and find it acceptable).

I didn’t tell them what it was, I simply told them that it was a walnut chocolate chip brownie. They were both intrigued and grabbed some of the pieces that I cut up for them. Both my wife and son loved the brownies (and they aren’t into protein or nutrition bars like I am).

Overall, these Salivation Snack Foods Brownies were a hit. Both my son and wife were surprised when I told them what it was, and my wife said that if she didn’t have to worry about the brownie getting stuck in her teeth and coating her mouth, she would get some of the brownies for herself and take them with her to work as a snack or quick lunch if she was short on time.

Would I Recommend the Salivation Snack Foods Brownies?

I will say this… they are EXPENSIVE. You get free shipping on their website for any order over $50, but if you just want to try a box, you’re going to end up eating the shipping cost along with your brownies. A box of the Salivation Snack Foods Brownies will cost you $33.95, and you only get eight brownies in a box (that breaks down to $4.24 per brownie). DAAAAAAAAANG.

If you can get over the price point, shipping cost, and the fact that their brownies only contain 8g of protein coming from collagen (I noticed some egg in the ingredient list as well), they aren’t a bad snack item or treat when you want something sweet.

Have you tried any of these Salivation Snack Foods Brownies? If so, let us know your thoughts down in the comments. What flavor did you like the best, or if you haven’t tried them, are they something you’d keep your eye out for?

Newer Post
Forging Customer Relationships Should Be a Brand’s Priority
Older Post
Should You Be Worried About Your Water pH Levels?