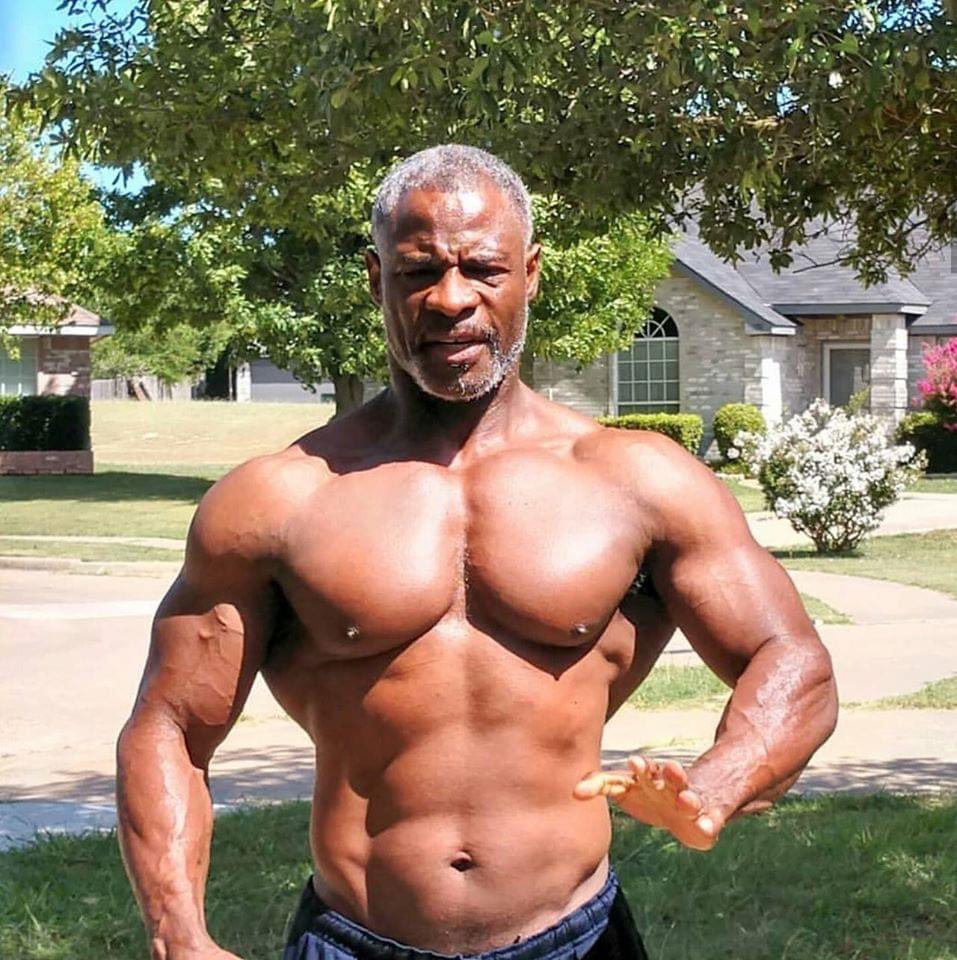 Ron Love is the quintessential motor city bodybuilder. Detroit is his home. He still trains at the original Powerhouse Gym in Highland Heights, MI. Everyday he goes to the gym, whether to train clients or get in a great workout. His level of expertise is second to none, imparting as much wisdom as he can on the younger generations.

He’s considered one of the best bodybuilders to emerge from the region, having placed within the Top 10 at the Mr. Olympia, and also earning a spot in the prestigious IFBB Pro League Hall of Fame. In addition to his many accomplishments as a competitor, he’s also a successful contest promoter, putting on the Ron Love Classic for many years. The truth is, when you think of legends, it doesn’t get any better than Ron Love. He’s a guy who did it all, including serving his hometown, as a police officer. I would think any biographer would have plenty to cover in Love’s career; however, the bodybuilding great may still want to add more!!

On a Recent LIVE With, Dave Palumbo asked Ron, point blank, did he want to return to the stage. Love answered, almost without thinking, instinctively, that he did. When Palumbo pressed him for progress photos, Ron agreed to send him some – so you know he’s serious!! So why now, why is Ron staging a comeback, and what does he hope to accomplish?

Whenever writers and historians weigh in on why an athlete chooses to come back, they often overcomplicate things. Sometimes, an athlete simply misses the stage, maybe misses the prep, and/or maybe they want to use a prep and appearance to market a new company or product. There’s endless reasons why doing a contest could spell a lot of good fortune. Moreover, we’re talking about a guy who competed in the late 80’s and early 90’s; he comes from a different era and what I mean by that is, he’s not afraid to work hard. A lot of guys who were on the scene just a few years later, have a completely different approach to the fitness industry. This isn’t to say that younger greats were lazy, they just had the luxury of the nascent internet. The net changed everything!! The net also allowed for the introduction of a whole wave of new brands (supplements, clothing, accessories & more). 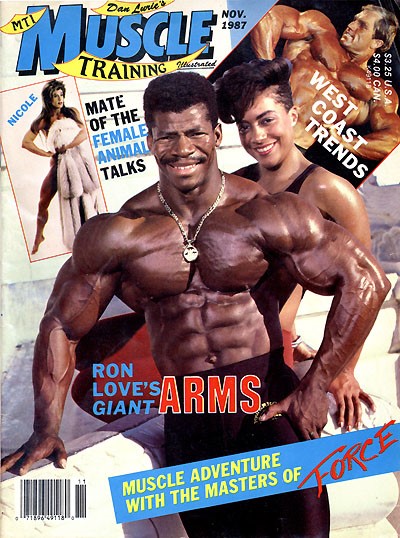 If you take a guy from Ron’s day, with knowledge of how social media works, and we could be looking at a pretty good body of work, starting with the interview at RX. It’s likely that Ron will now be on Muscular Development’s radar, as well. I’d love to see Ron Harris interview Love. Other outlets, like Digital Muscle and Behind The Pump may also want to cover the Hall of Famer. Finally, popular YouTube channels like Nick Strength & Power, Desktop Bodybuilding, More Plates, More Dates and others, may want to as well. I’d love to see Shawn stay interview for Digital Muscle!! I, certainly, hope that this article, here, at Iron Magazine, helps Ron get more attention, as he embarks on this very exciting, new chapter.

While the comeback will inspire countless, the critics will undeniably weigh in. Their main issue will be, what their main issue always is. They will raise the question of legacy. They might ask, why is an IFBB Hall of Famer, remembered as being a driving force, want to return to the stage, many years later? WIll he see similar success or will he fade? Others will want to speculate in terms of money. They will try to justify all the hard work Ron will put in, against what kind of prize money he’ll actually get. Then there’s still another kind of critic; there will be guys from Ron’s own era, that have long forgotten the stage, who may want to rain on his parade. Why? I haven’t the faintest idea, but it will happen. And of course there’s the haters – and you can rest assured Ron has them.

Anyone who sees any kind of success in the fitness industry, has haters. I can’t imagine that Ron has too many, but they’re there. The point is, Ron doesn’t care. He knows who he is & he knows what he’s capable of. Remember, Ron Love is also one of the most sought after gurus in Detroit. He’s worked with countless athletes, over many years, so not only does he know what he is capable of, but he has a rich understanding of training, nutrition, and supplementation. I think Ron probably assessed the situation, quite possibly over the course of many years, and arrived at the conclusion that was something he could do.

When Ron told Dave Palumbo he was weighing 280 lbs, that truly took the conversation to another level. Remember, I’ve been in the gym with Ron, I’ve seen him working out and training others. Even five or six years ago, he was still holding onto a good amount of size, crazy strength, with an ironclad work ethic. The fact is, when Dave even floated the idea of whether he would stand side by side with IFBB legend Robbie Robinson, the response was classic. No disrespect intended for The Black Prince, but Ron would dwarf him, today.

Now mind you, guys like Robby Robinson and Frank Zane still look close to how they did at their prime. They may have lost some weight & look older, but they’re lean, ripped, and very symmetrical. That being said, what dominated in the late 70’s, didn’t have the same effect ten years later. In today’s bodybuilding world, a bodybuilder under 200lbs, not competing in the 212, is going to get annihilated. I don’t care how much their physique flows or how gracefully they pose – it would be a slaughter.

When Ron says he’s holding onto 280, probably upwards of 240 on stage, that’s competitive. If anything, the suggestion served to really show how serious Ron is. If he was just there choppin it up in an interview, he would have thanked Palumbo for the comparison, and probably talked about how Robinson’s physique is great, as well as his own. Ron showed Robbie respect and all, but his demeanor was that of a competitor fixin to get back on stage. Even when Palumbo asked Love if he was interested in the Masters or Open, Ron didn’t even know Master’s shows were still around. When he decided to return to the stage, he didn’t care if it was against 25yr olds or masters-age athletes. This is a man who’s ready to return and who fears no one. This could really be something!! 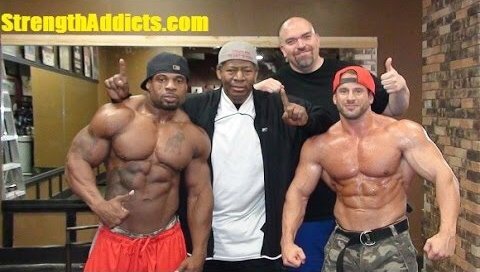 I, personally, think we could be witnessing something very fun and exciting for the sport. This could be like the return of The Maryland Muscle Machine. Again, who cares about placings, it’s about the journey!! Everything you see today – on social media – celebrates the process. I hate to say this, but no one cares about placings, it’s all about publishing quality videos, putting out the great photos, and reporting news, almost the instant it happens. That’s not to say Ron may not surprise the fans in building a highly-competitive physique, earn top honors, and even win a few shows, but if this is done right, we could see some digital downloads, maybe an ebook, a string of media appearances and maybe even a few companies reaching out to have Ron on board. If anyone thinks I’m kidding, think again. The industry is finally realizing the inherent value in having Hall of Famers re-emerge and defy the odds.

Lastly, I think it’s very shrewd of Ron to announce a comeback the year he plans to do it. When Palumbo asked him if the comeback would be this year or next year, Ron couldn’t have given a better answer. He didn’t go on the air to announce a comeback a year from now, he was there to say, it was going down in 2021. In 2021 Ron Love will be on an IFBB Pro League stage, battling it out, and putting to shame all the naysayers!!

I don’t care what his age is, if he gets on stage at 240 (or more), ripped to shreds, posing like the Hall of Famer he is, Ron Love is still very dangerous. If he were to compete in the Masters, then it’s lights out. Who – at the Masters level – will be able to take out Ron Love in prime condition at that weight?

Also, as much as I love masters competitors, there’s a huge difference between a masters pro (who turned pro at the masters level) and a former Open great, who competed for years, and then competes at the masters division by virtue of age or to stage a comeback. All guys are the same age, may all be of the same weight, but the experience differential may be too much to overcome.

I think if Ron goes into the Masters Pro’s he could easily win a string of shows in both 2021, 2022, and potentially beyond. At that point, the question becomes, how long would Love want to continue from there. I mean, that’s the other risk – we can easily get ahead of ourselves. What might just be a single show comeback, might have people thinking it’s his game plan for the foreseeable future. Whatever the case may be, I suspect everyone will be talking about this story for all of 2021!!

What do you think of Ron Love’s comeback? Does it matter where he’ll place – or – is the fact an IFBB Hall of Famer will make good on his word, mean more?