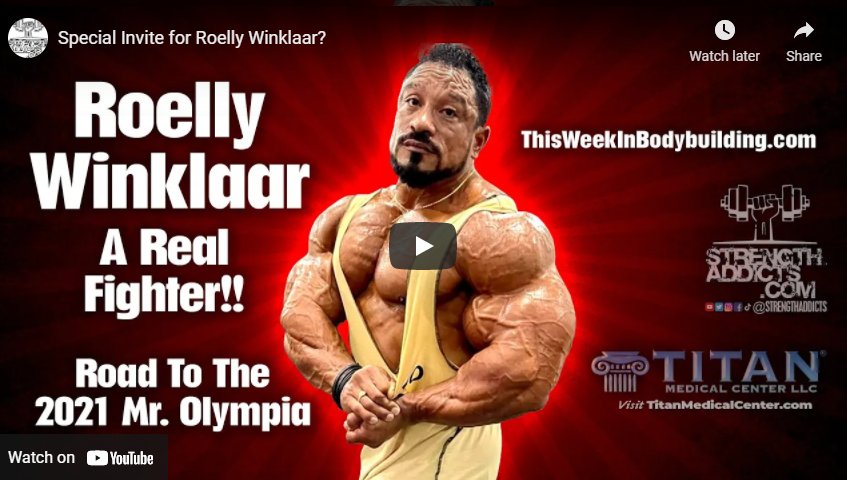 The Beast, Roelly Winklaar could have won the 2020 Mr. Olympia. I don’t like to live in the past, but this point needs to be made. It’s such a powerful point, that I chose to start the article with it. Everyone, and I mean everyone, couldn’t believe their eyes last year. The 2018 Olympia People’s Champion was in top form; the only thing left was to hop on a plane for Orlando, FL. That being said, 2020 was the beginning of the chaos. Even though by the 2020 Olympia, the contest had long, changed dates and venues, the world was still being ravaged by the Covid 19 virus. Even today, with the growing concerns about the Delta Variant, we’re still struggling for normalcy, but last year was so much crazier. I don’t think we’ve ever had a year like 2020 and hopefully we never again do.

Anyways, even Big Ramy, one of the most hyped competitors of the contest in 2020, saw himself sidelined by the virus. He was unable to qualify, so he was given a special invite. Just when everything seemed to be ready for the O, just days out, Roelly caught the virus. Unlike in Ramy’s case, Roelly caught it so close to the event’s date, that not only would it have been difficult for him to have competed, he couldn’t even get a flight. Talk about bad luck, and the worst possible timing. What a huge missed opportunity.

But yes, no matter how great someone looks on social media, that’s not the same as being on stage. I’ll give you that! And no matter how great someone looks on social media, doesn’t mean that they’ll look like that after the final 48, either. I’ll give you that, too!! However, when you looked at the size and condition that Winklaar had accomplished, that had Top 3 written all over!! If Roelly had taken the stage at the 2020 Olympia, it’s my opinion that he would have bumped Phil Heath out of the Top 3. And when you imagine that Top 3, with Ramy, Curry, and Winklaar, all in top form, all battling for the title, it may have been a different story. Could things get any worse?

Well, if Roelly wanted to compete at the 2021 Mr. Olympia, he’d have to qualify. That’s not something he’s had to worry about in a long time. As one of the Top 5 for years and years, The Beast became accustomed to automatic qualification. This meant he could compete – if he wanted to – but his spot at the Olympia was secure. A lot of guys who are in this elite club only compete once per year. They represent the richest, most powerful 1% of the pro ranks. They pull top sponsors, make good money, and usually have the ability to train all year for the biggest contest in the sport. When you have to qualify, now you have to put your body through the ringer – just like everybody else. That’s a bitter pill to swallow for many of the top guys; it’s both humbling and oftentimes, overwhelming.

Roelly, could have gambled. He could have laid low, not competed, and banked on a special invite. Let’s not forget that in 2018, the fans voted Roelly their champion. The Olympia, now owned by Jake Wood and run by Dan Solomon, puts the fans above all else. That’s not just positive PR from Iron Magazine, that’s 100% on the money. The Olympia hasn’t always cared about what the fans had to say, but the current leadership is all about it. I, honestly, believe that had Roelly not hit the contest circuit like he did, there would have been, at least serious consideration, for extending him a special invite. The fans want Roelly on stage and Roelly sells tickets – that definitely would get some high level discussions going. The fact he’s a man’s man, though, earned him even more respect.

It’s not easy to mix it up with the common folk. For years, Roelly was considered a future Mr. Olympia. I would say, he very much continues to be, but now he’s earning his way back to the top. He competed in Chicago, taking Top 5, but being unable to live up to the hype that scared even Hunter Labrada, probably took a toll on him psychologically. Later, he went on to battle in Europe, where he placed second to Nathan De Asha, qualifying for the Olympia. That was no cakewalk, but he battled so hard, that it could’ve gone either way.

To be honest, I didn’t know that 2nd at that European show qualified him for the O; I was ready to start lobbying for a special invite. In fact, I even talked about it in This Week In Bodybuilding (episode included in this article). When viewers started pointing out that Winklaar was in fact, qualified, I was absolutely ecstatic to be wrong. That’s a mistake I was all-too-happy to concede. And while I could sit here and start to compare Roelly to Brandon, Roelly to Ramy, or Roelly to aspiring giants like Nick Walker, where Winklaar places at the Olympia is, rather, immaterial to this article.

The whole premise of this story is the fact that a guy like Roelly Winklaar hit the ground running. When he came up short, he didn’t throw tantrums, he didn’t undercut his competition, and he didn’t assert or imply any improprieties (e.g. politics, favoritism, etc.). I am very proud of the fact that Roelly knew what had to be done and got to it, especially after being largely ignored in 2020. Despite the fact he looked his best, quite possibly in years, he was not at the center of the promotions. The 2020 Olympia was all about the 4 Mr. Olympias (Brandon Curry, the retiring Dexter Jackson, Phil Heath and Flex Lewis). Even when The Welsh Dragon withdrew, the spotlight didn’t turn to guys (who’d earned it) like William Bonac or Roelly Winklaar. Instead, it turned into calls for Big Ramy to get a special invite. Going into the 2021 Olympia, we still haven’t seen much spotlight on The Beast. That’s both good and bad.

It’s good because it will allow the Dutch icon to train in peace, prepare without drama, and quite possibly fly under the radar all the way to the stage. Although Winklaar has never been one embroiled in controversy, being the obsession of the press is enough to drive any competitor utterly mad. On the flipside, being ignored isn’t ideal, either. Roelly has sponsors and I’m sure would either want more of them – or – more money/exposure from the companies he’s currently working with. Being ignored by the press doesn’t really enable him to market himself, nearly as effectively, as with exposure. A happy medium would be perfect for Winklaar and I suspect that this will be his reality after this year’s Olympia. I think the contests where Roelly missed his mark, even ever so slightly, have given him some important cliff notes for the biggest contest of the year.

Absolutely! As a hybrid bodybuilder he’s able to battle mass monsters and conditioned freaks. His look is a fusion of the two and that’s not all that common today – or ever. As long as he poses hard, works the audience (as only a People’s Champion can), and doesn’t lose heart (which he never does), he can definitely be in the mix.

I have always believed that any competitor that makes it to the Top 3 can win the whole event. When you’re that on point, that focused – it’s your show to lose. I don’t even care if you’re up against a defending champion. If you’re legitimately in the Top 3 at a tough Arnold or Olympia, then every single pose and every single transition, will determine if you win, place 2nd, or walkway with 3rd.

If Roelly works his way back to the Top 3, he can most definitely be your 2021 Mr. Olympia. The fact he’s had the hunger to qualify and the fact his head is 100% in the game, despite not being a media favorite, means he’s coming with one thing – and one thing only, on his mind – WINNING!