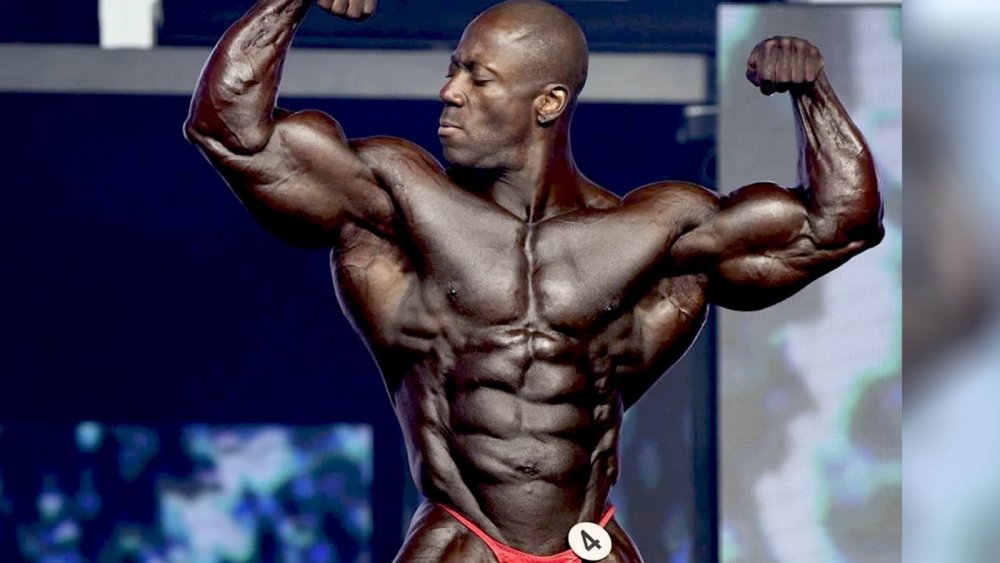 To say the death of Shawn Rhoden hit me like a ton of bricks, would be an understatement. I first saw the news on Nick Trigili’s Instagram. I was at a red light and couldn’t believe my eyes. It couldn’t be possible, I thought. Just a few days ago, I was doing an IG Live @StrengthAddicts and Shawn dropped by. He’d join my Lives from time to and time and we’d correspond quite often.

He trusted me and unlike many others in the industry press, I never burned him. When the news about his case hit TMZ, it seemed everyone wanted to talk to him about it. It was like the bodybuilding outlets wanted to ask him all the questions he couldn’t answer. At the behest of his attorney, Rick Collins, Shawn never spoke about the details of the case. I always respected that and as a result, he always felt comfortable around me. To be totally honest, I never believed he was guilty, but I never said much about it publicly.

Shawn was a good man, who in many ways wasn’t afforded the same rights as other Americans. In our country, you’re innocent until proven guilty, but in his case, he saw his career stolen from him. He would never be allowed to compete again, despite the many pleas from the fans. He was never able to defend the title he won, bringing the Phil Heath train to a screeching halt. 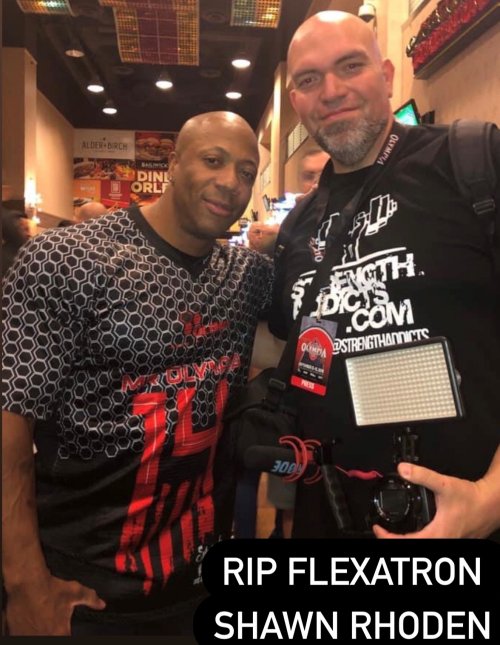 I will never forget how many people gave me crap about publicly predicting Shawn would win the title. Even after 2016, when for all intents and purposes he defeated Phil Heath, many of his critics refused to give him the respect he’d earned. In fact, in 2017, when he was injured, and unable to eat, they were all too happy to point at his drop in placings. It’s almost as if they wanted to see him fail. So, of course, when he won the title, they just couldn’t bring themselves to be happy for him. They got one last shot in, after Rhoden guest posed at Jim Manion’s show in early 2019 in Pittsburgh. Although he was clearly in his off-season, his haters didn’t miss the chance to try to draw question as to whether he was really the greatest bodybuilder in the world.

The fact is, Shawn Rhoden did what others couldn’t. Kai Greene was never able to beat Phil. Big Ramy was supposed to – and couldn’t. Dennis Wolf retired, trying to. The one and only guy who was able to do it, was Flexatron. And who can forget how much of his mind, body, and soul went into that victory. I’ll never forget seeing Chris Aceto and others, practically having to help Shawn walk. It was almost like a scene out of a Rocky film. Shawn wasn’t talking crap to YouTubers and walking around all glum post-contest. It wasn’t that kind of time. He was drained, exhausted, and running on fumes. When Rhoden won the Sandow, he’d given his absolute all. He did, what we’ve only heard about in bodybuilding folklore – he knocked out a defending champion. He beat him in 2016, but he knocked him out in 2018. It was such a strong win, if y’all recall, that it kept Heath from coming back in 2019. Phil Heath was beat so badly, he wanted no talk of a rematch, and that’s also why, he couldn’t contain himself but for a week or two before going on the offensive in the press. Shawn didn’t just edge him out, Shawn ran The Gift out of the sport. Remember, Heath only came back in 2020, when Shawn was long sidelined and there was practically no chance, he could compete. That’s how good Flexatron was.

But there were other instances to show how Rhoden was different than the others. He was a real man’s man and loved the sport. He loved his fellow competitors and was a tremendous ambassador for fitness. I remember that show in Pittsburgh and how Rhoden interacted with Roelly, Dexter, and Brandon. At the time, Curry was riding high off his Top 5 finish in 2018, and many saw him as the number one contender. Instead of being distant and giving him the cold shoulder (like Phil had done with him), Shawn was happy for Curry and very supportive. I’ll talk more about that shortly, but seeing these guys hanging out, truly showed that a change of the guard had taken place.

Although his reign was very short-lived, in the time Rhoden was on top, he made sure the general mood in the sport was upbeat. Much like William Bonac, who had asked his fans to recognize Brandon Curry as Arnold Champion right around this time, Rhoden pushed the same vibe. He wasn’t an insecure champion. If he was going to retain the title, it was going to be based on his physique, not being rude or caddy, and that single distinction changed everything. That Pittsburgh show said it all. It showed just how confident Shawn was and how little he cared about the competitive bullshit that made the sport so petty, at times. He loved to laugh, he loved to be upbeat, and he loved to eat.

Yes, that’s right. From all the people I’d talked to from the DMV area, Shawn was known to love eating. There was about a 2–3 year run, where I was all over Maryland and northern Virginia. I must have covered a dozen shows there. I met gym owners, old school guys, and the historian types. Many, like Jerry Ward, were friends with Shawn going back many years. Everyone knew him to be a hard worker in the gym and a force to be reckoned with when he was on, but everyone also knew about his appetite. While he was said to be chubby, it was chubby by bodybuilding terms.

One of the IG stories I liked most, was whenever Shawn would get his MyCookieDealer orders. I don’t know if those videos are still around, but you could see his face light up and you knew he wasn’t just eating a bite here or a bite there, to be polite. He loved those cookies, and you just knew he could probably put one, two, or three away, in just one sitting. That’s the kind of champion he was, he was the kind of guy who liked to laugh, eat cookies, and win bodybuilding titles. He’s a guy we all loved and who we will all hugely miss.

The last time I saw Shawn was at the 2020 Mr. Olympia. I was hopeful that the IFBB Pro League would let him compete. His case was no longer in the news and to date, I hadn’t seen or heard much of it. Rumors were strong that the case was going away. Of course, that’s never true until it actually happens, but people were hopeful. It was going to be Shawn’s second Olympia out of the sport, and it just seemed like maybe, possibly, he’d be able to compete. When it became clear that that was not the case, many of us felt a huge sense of disappointment. Nonetheless, Shawn was at the O.

Even though he couldn’t compete, there was no way he’d miss the opportunity to meet the fans, show support for the athletes, and in the process, help grow the sport. As Brandon Curry came out, surrounded by his entourage, I greeted them and expressed my displeasure with the judge’s decision to award Big Ramy the title. While I was standing there, alongside the MD guys, Shawn emerged. We shook hands and hugged; it was so good seeing him. We talked for a couple minutes and right when I thought he was going to leave, he called me over, and thanked me for showing so much support to Brandon Curry during the year. Shawn knew that I was his fan, but he appreciated that I was so supportive of Brandon, and he made a point to tell me so. I kept that to myself for almost a year, but decided it had to be shared. I wrote about it on an article for Iron Magazine about a month or two ago, never knowing I’d be writing this article today. I’m glad he was able to see that.

You know, I’d tag Shawn on a lot of my articles, posts, and stories. Many times, he’d repost me, often he’d write me, and although I didn’t see him often, I felt very close to him. We’d done many interviews and I always loved the fact that the Shawn Rhoden who I did interviews with, was the same Shawn Rhoden I’d talk to privately. He was very real, very genuine, and had a really good heart. I can’t reiterate this enough. We have a lost dear, dear friend today.

God Bless Shawn Rhoden. I’d like to take this opportunity to send my deepest condolences to his family and friends. I know the world of bodybuilding mourns his passing. He was a terrific person and will be greatly missed.

Newer Post
Walking at THIS Time of Day Can Improve Your Health
Older Post
Should the PBD Podcast Have a Health Segment?