RIP Phil Hernon – You Will Be Missed! 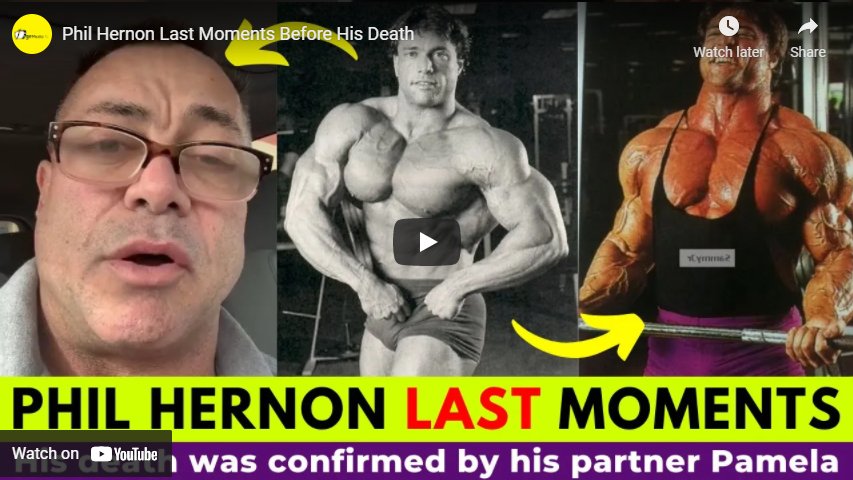 Phil Hernon loved to help people. He made videos all the time, whether for his own platforms or graciously appearing on others. He knew he could come off as a smartass, but while he did know a lot about bodybuilding, supplements, and diet, he never closed himself off. He wasn’t one of the so-called gurus who believed themselves to be geniuses, who believed themselves to be beyond learning new things.

That said, Phil lived the life of a pro bodybuilder and he certainly paid his dues. He knew what was required to rise through the ranks during, arguably, the most competitive era in bodybuilding. While the 70’s were the Golden Era and the 80’s saw the emergence of one of the greatest champions of all time in – The Totally Awesome Lee Haney – the 90’s have been recognized by many top authorities as being the toughest decade to compete in. This was a time when pro cards were few and far between; it was a time when guys brought the size AND the condition.

Speaking of size, Phil brought a great amount of it. Perhaps his best showing was the 1995 USA’s where he beat Craig Titus. Although Craig was the big name in that lineup and Hernon pulled off the upset, 2008 Mr. Olympia Dexter “The Blade” Jackson was also battling for that overall and was razor sharp.

Despite a huge win, even back when bodybuilding was on TV and the magazines were running at full force, Phil would become overlooked, very soon. His pro career was almost non-existent with regards to its length, but he was able to go pro, in top form, and that contest basically built him. It also gave him all the credibility he needed, but that wasn’t enough for him. Hernon made use of his pro status and the knowledge he gained to speak to the dark areas of the sport. He was highly critical of the drugged-up culture, he shed light on what life after going pro was like, and he truly spoke without filter. There’s plenty of guys in the fitness industry who market themselves as saying whatever comes to mind, but nothing could be farther from the truth. Phil told it like it was. Phil Hernon may not have been super popular; in fact, many considered him to be a forgotten bodybuilder, but in the hearts and mind of hardcore bodybuilders, his name was a respected one. In fact, upon his passing, videos from RX Muscle, Jerry Ward, and even younger content creators like Nick’s Strength And Power and Desktop Bodybuilding, showed the former Mr. USA a high level of respect.

Phil inspired people to sound off, and in so doing, some of these guys became more popular than him. The fact of the matter is, few people really understood where Hernon was coming from. While some of his detractors wrote him off as a know-it-all, others thought he was mostly jaded. They rationalized his skepticism with the fact his career was less than stellar. The reality, however, is that bodybuilding is a rough life and we have seen far more deaths and serious injuries than expected. While a percentage of those who wind up on dialysis or with serious heart disease in their 30’s and 40’s may have family histories or pre-existing conditions (removed from bodybuilding), the vast majority of folks who are dealing with these types of serious health issues, are in this boat because of their heavy PED usage. Phil didn’t beat around the bush about that.

He wanted the world to know, and dug deep on every video. I always wondered why he didn’t get picked up by a Generation Iron, an RX Muscle, or even Muscular Development. While he was big on the boards, when the boards were in full swing, I don’t think he ever aspired to be a talking head, at least not in the business sense. He was a legend (to the real fans) and someone that the sport’s truly hardcore listened to. He spoke out against fad diets, lame-brain training styles, and the pointless use of experimental supplements, whose actual effects and risks were, largely, unknown.

I don’t think I ever heard him badmouth testosterone or moderate cycles, but he was very old school in that really believed in the value of proper training and diet. He also tended to remind me of MD’s Steve Blechman. To be honest, there aren’t a lot of guys who actually read scientific studies. There’s plenty of people who like to inject terms like “science backs this” or “the science” is clear, but they don’t actually know. They don’t actually take the time to study the innovations, they just assume that if they include these type of empty phrases when making their points, that no one is going to question them. And few probably would; however, if Phil Hernon heard something that was contrary to the knowledge he acquired, at the very least, he’d disagree. Disagreeing is huge, especially when most of the so-called gurus, today, avoid debate and many times, run away from it.

As someone who’s interviewed many of the greats, especially guys who got overlooked (e.g. Alq Gurley, Ron Love, John Simmons, Abbas Khatami, etc), I never asked Phil for an interview. Actually, I may have, but maybe I didn’t follow-up. I don’t remember. Nonetheless, that would have been a great time. I often saw him post on the Strength And Physique Super Board on Facebook, but I always figured I’d get around to it, some day.

Speaking of the S.S.B. – version 2.0, that’s a group you should definitely request to join. I would say it’s one of the last places where hardcore Bodybuilding reigns supreme.

Phil would always post there, as well as a few other old school type formats. The content wasn’t spammy like a lot of what you see on social media is, today. He wasn’t advertising a dozen sponsors, he wasn’t asking for money, he was just imparting wisdom. That’s a really important thing he did, and it wasn’t for a few weeks or a couple of months. Phil Hernon was always putting out knowledge, it may not have had much production value, but the truth more than made up for it.

Again, there’s always 3 sides to every story. That which is factual and that which is hogwash; interestingly, the truth is almost always somewhere in between. Phil left you, the viewer, to make your own personal, judgment calls. That being said, he’d make his case with a lot of heart. A lot of times, he came off almost as if imploring people. It was as if he was trying to keep people from making, maybe, some of the mistakes he made.

The fact is, he had gone all the way. At 5’7, 240 lbs shredded, Phil Hernon was 100% a 1990’s bodybuilder. He was able to hang with the best and emerge victorious. Going pro in that type of way, could only have been topped by winning at the Ironman, NOC, Arnold or Olympia. I don’t think you could compare winning the prestigious NPC USA Championships with winning anywhere besides the Big 4 Pro shows I just rattled off.

A lot of guys today go pro by taking 2nd place in a class – or by default. At some contests, if 2nd place has already won a pro card, 3rd place can get one. In some rare situations, where the top guys compete in various age groups, a person who took 4th, could conceivably, earn a pro card if 1st, 2nd, and 3rd already won cards. Listen folks, if you’re a pro – that’s all that matters, right?

I’d love to say how you go pro doesn’t matter, but it kind of does. If you got a pro card by placing 3rd in your class at a Masters show – or – you went pro by winning the overall at the USA’s, I most definitely would say these are polar opposites. Winning the USA’s put Phil Hernon on the map – worldwide. It may have been twenty-five years ago and his run may have been a very short one, but he, at least, experienced it. And that, most definitely, added huge perspective to his outlook on the sport and his commentaries for years to come.

I don’t know what Phil passed from, but I know he will be remembered for his many contributions to the sport. I only wish more people could have heard him while he was alive. I can’t tell you how many videos of his I’ve watched. It has to be at least three or four dozen. Now, that may not seem like much, but let me clarify. While Phil probably made hundreds, if not thousands, of videos, to say I watched 30-40 may not seem like much, but I watched them from beginning to end. Nowadays, when most people have an attention span of 3-5 minutes, to watch a 20-30 minute video, means you’re really engaged and really enjoying what you’re watching. I loved Phil’s honesty and I loved the fact he spoke without fear. I found that very refreshing about him. If you guys ever get a chance, check out his Iron Debate with Lee Priest, that was Phil Hernon To A T.

We, here at Iron Magazine, are all very saddened by the passing of Phil Hernon. We send our deepest condolences to his family and friends. Although he’s gone, he’ll never be forgotten.

Newer Post
Could a Gym Membership Be the Best Way to Grow Your Business?
Older Post
Arnold’s Freedom Blunder