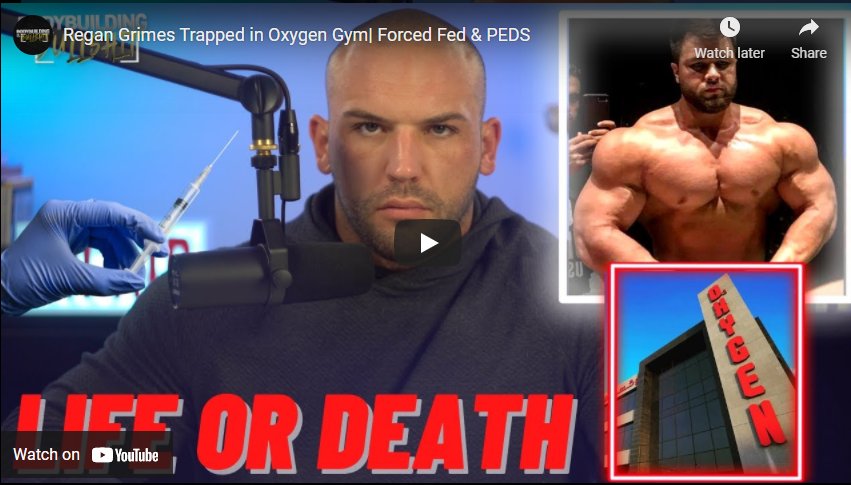 I’m sure many of you saw the Regan Grimes interview with Dennis James. Others have seen the reactions to it, from Chris Aceto to Nick Trigili and others. Ever since Big Ramy trained there to other greats like Roelly Winklaar and of course, 2019 Mr. Olympia Brandon Curry, many in the American bodybuilding community have been skeptical. For years, everyone would make references to the “anabolic chicken” there, suggesting that the facility and/or the country it was located in, had access to PED’s that no one in the world knew about. Other outlandish theories included innovative and top secret training methods, SARM’s, and experimental concoctions so out there they’d even stump top chemists. This banter would go on and on, as people tried to figure out why so many bodybuilders who went there, would come back looking phenomenal.

Demand was always through the roof, but spaces were limited. This was not a gym looking to have the biggest team, rather, they were always highly selective of who they accepted. There were many cases where top pro’s names dropped the gym in interviews, whether doing so subtly by dropping a few compliments – or – blatantly, by all but begging to be invited. When Big Ramy left, he had an incredibly hard time finding his way. He tried several coaches, including Neil Hill, and even may have considered going back to Chris Aceto. The fact is, Oxygen Gym did right by Ramy. After all, he got to 2nd place at the 2017 Olympia. In any event, for those who thought Ramy made Oxygen, they couldn’t have been more mistaken. Brandon Curry, to date, is the gym’s greatest success story. The Prodigy went there with a lackluster pro career and totally turned it around, from placing Top 5 at the O, to winning the Arnold, to then winning the Olympia. His look in 2020 was nothing short of amazing, as was his look in 2021. Who can argue with that? So if the gym is so great, why the hate? Why all the stories?

I have to be honest. I like Regan Grimes. He’s a nice guy. I met him way back at the 2014 Arnold. I believe that was the year. He was at the BPI booth and my buddy Chris Mackenzie introduced me to him. Regan has always had the support of key people like Chris and huge bodybuilders, like 4x Mr. O Jay Cutler. They like his aesthetics, he’s a good looking guy, and he can be very marketable when he wants to be. Any company would do well with him as their lead athlete. That being said, he’s like a few top guys who have had issues finding their niche. Grimes looked fantastic in Classic, but his heart was clearly in Open Bodybuilding. His height and structure would preclude him from 212 and I highly doubt MPD was ever of any interest to him. If he’s going to compete, he’s either going to be aesthetic and streamlined – or – he’s going to be jacked. From what I understand Regan had always wanted to travel to Kuwait and give it his all with the Oxygen crew.

And that’s just it folks, with this gym and this crew, you can’t be a part-time bodybuilder. They don’t have time to waste. If you want to prep there, you have got to give it your all. They don’t care about your money and they certainly don’t need you – it’s more like, you need them. At O2, pride is a very big deal. If you train at Oxygen, no matter where you’re from, you’re representing them when you take the stage. If you look like complete garbage, it’s going to make them look bad.

I don’t want to be too hard on Regan, but I found his appearance on The Menace’s podcast to be somewhat laughable. It’s also very interesting that Nick’s Strength & Power, states Regan is far better off without Oxygen and doing better with his career than ever before, now that he’s working with Milos.

Ok, for starters Nick Miller just re-reads other peoples’ comments and plays other people’s footage. If that’s reporting to you, then ok, but for me, he’s more a parakeet than a real journalist. His commentaries are as credible as Regan’s complaints about 02.

So far, a ton of big name guys like Brandon, Roelly, Bonac, Nathan and others have all gone to Oxygen and no one has given a sob story interview like Grimes did. And while I feel for his significant other having to leave early, who brings their girlfriend/wife to a gym that doesn’t allow women? More importantly, who brings a significant other to a place where the most serious prep of your entire career will take place?? The one and only reason to be there is to train.

For Regan, putting on size fast was always a key concern. In fact, prior to going there, it was widely known that he wanted to get bigger to be competitive in Open Bodybuilding so I’m not sure why he was crying to Dennis about getting there at 260 and blowing up to 300. Did he think he could gain 40lbs of quality size in just 6-8 weeks time without suffering? Surely, he contemplated the fact he wasn’t going to feel peachy, his body was probably going to ache, and he may have thrown up, cramped up, and wanted to all but die at times.His interview with Dennis was probably one of the LEAST hardcore things I’ve seen in over a decade of covering bodybuilding and fitness.

This interview would have been akin to Dorian about his underground dungeon gym not having air conditioning or Ronnie Coleman crying to Brian Dobson for not having a Jamba Juice bar at the original Metroflex Gym in Arlington, TX. I just don’t understand why Regan would go cry on DJ’s podcast like that. Further, DJ has his own agenda. He’s a Big Ramy proxy. He’s not an impartial interviewer just trying to get the story. If he can take a crap on Oxygen Gym, he’ll gladly do it, so will Chris Aceto, and so will the long line of haters that have been left in the dust by the iconic facility and it’s crew. The fact of the matter is Brandon Curry kicked Big Ramy’s ass at the 2021 Mr. Olympia and no one knows it better, than Dennis James.

Even the quote, cited by Regan, of Abdullah telling Grimes that he’d see him downstairs at noon to train, sounds like a coach who cares. It sounds like the program had real structure (something Ramy has never liked and apparently, Regan, doesn’t either).. Also, the Canadian pro seems to have complained about having food prepared just for him, timed out according to his metabolism, and being encouraged to consume it. How does that sound like hell on Earth? What’s worse is the vibe some commentators are trying to imply, as if a full grown man was being kept against his will. It sounds like a movie – a really cheesy movie – that makes Regan look and sound like a ______ (you fill in the blank). Mind you, I like the guy, but why would he ever allow himself to appear so soft in a sport of alpha males?

Also, to Nick Miller’s stupid comment about Regan looking the best he ever has, let me say Regan did look fantastic in Reno and Egypt, but where did he place at the O? There’s a huge difference between shining in a lackluster lineup at two third tier shows and getting your ass handed to you at the Arnold or Olympia. Before we get carried away with Grimes’ runner-up and 1st place honors, we should see how he’ll do against the best in the world, either next year in Columbus, OH or Orlando, FL. Again, he’s capable of great things, but to date, he’s the only guy who’s gone on a podcast to whine about a gym and/or coach being too hardcore. Has Bonac, Winklaar, or even Big Ramy (who left O2) ever complained that they were too intense? And the irony is that Ramy is now prepped by Chad Nichols. If you read up on what his critics say, particularly “Sugar” Shawn Ray, then you’d know that Dennis encouraging Grimes to open up about Oxygen is utter hypocrisy, considering that Chad is known for some of the craziest protocols in the industry. You’ll never hear DJ talk about that; though; he’s too busy kissing Chad’s ass to have time to criticize him. Milos is also known for relying HEAVILY on…, well, you know.. But we didn’t hear DJ prode Grimes about that, either. Again, Dennis James has his own agenda.

Interestingly, there are no experimental, exotic drugs at play at O2. They don’t sleep upside down, they don’t perform magic, they just eat, sleep, and train, bodybuilding. The key, in my opinion, is structure and schedule. Just look at Brandon. Why do you think he leaves his family (with their full support) each year for his prep? Why does he travel halfway across the world and commit 110%? Why? Because Brandon wants it. He’s been #1 and he will do whatever it takes to be #1 again. They want bigger legs? He builds them. They want better condition? He suffers more and comes in harder.
Brandon Curry is a warrior. Roelly and WIlliam are warriors. I’m sure they’ve all had times when they felt like shit, when they wanted to quit and didn’t, but the last thing you’d ever see them do is go cry on a podcast about not being able to hang. Give me a break bro! I’m sorry, but no one feels bad for Regan and if his goal was to throw shade at O2, all he’s done is create more interest in the gym. Maybe HE couldn’t hang, but everything he described is exactly what a lot of guys can only dream of.

You’re going to a place where everything you see, is there, to ensure you look your absolute best for the contest you’re doing. That’s bodybuilding heaven.

In any event, to each their own. I happen to think that Oxygen Gym, Abdullah, and the whole team there, are among the very best in the world. I like Regan and I hope he does well in the future, but I can’t comprehend why he would have done this interview. I also hope Dennis James is done throwing shade, but I highly doubt it. As I always say, losers don’t have haters.

Newer Post
Shaun Clarida Should Compete in Open & 212 at The 2022 Mr. Olympia!
Older Post
How to Make It Through Thanksgiving Without Weight Gain